The Aam Aadmi Party (AAP) will hold a Maha Kisan Sammelan on March 21, in support of the farmers and their agitation. The programme to be held at Bagha Purana, will be addressed by Delhi Chief Minister and AAP’s national convener Arvind Kejriwal. The announcement was made by AAP state president and MP Bhagwant Mann, Leader of Opposition (LoP) in the Punjab Assembly, Harpal Singh Cheema, party’s Punjab incharge Jarnail Singh and co-incharge Raghav Chadha, during a press conference convened here on Monday. 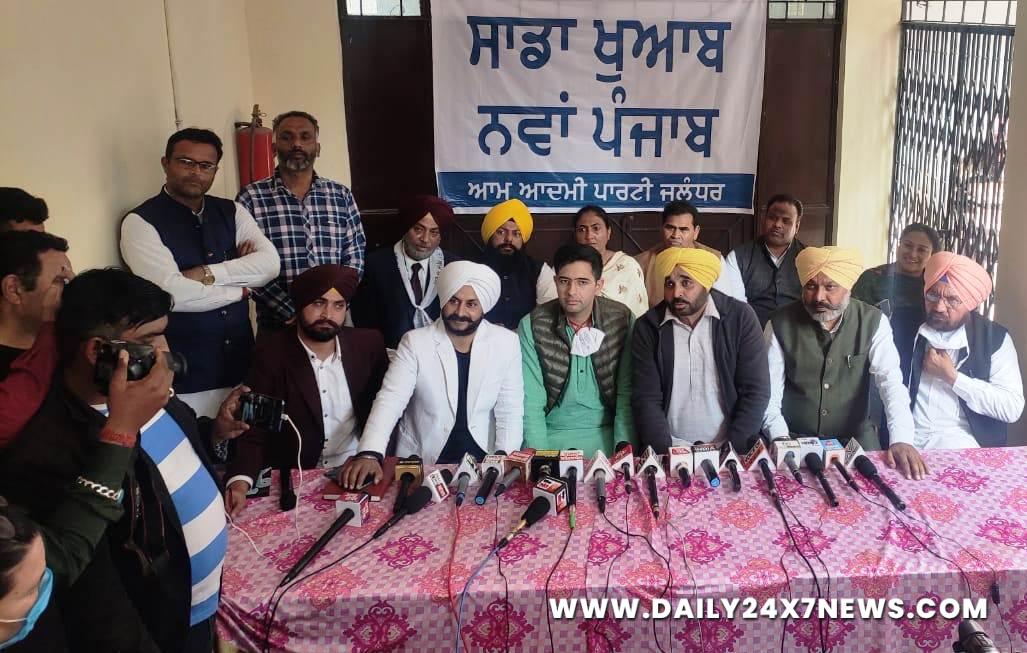 Jalandhar : The Aam Aadmi Party (AAP) will hold a Maha Kisan Sammelan on March 21, in support of the farmers and their agitation. The programme to be held at Bagha Purana, will be addressed by Delhi Chief Minister and AAP’s national convener Arvind Kejriwal. The announcement was made by AAP state president and MP Bhagwant Mann, Leader of Opposition (LoP) in the Punjab Assembly, Harpal Singh Cheema, party’s Punjab incharge Jarnail Singh and co-incharge Raghav Chadha, during a press conference convened here on Monday. The party volunteers and the people from all parts of Punjab would be invited to AAP’s Maha Kisan Sammelan.Addressing the media on the occasion, the leaders said that the AAP genuinely believes that the draconian farm laws need to be repealed immediately and through this Maha Sammelan, a message would be sent to Prime Minister Narendra Modi-led central government to immediately repeal the anti-farmers black laws. They said that the AAP was the first party to highlight the issue pertaining to the black farm laws and the consequences it would have for the farmers of the state. The leaders said that the party held public meetings in the villages of Punjab to inform the people about the black farm laws and its consequences. “AAP motivated the panchayats of Punjab to call a gram sabha and pass a resolution against these farm laws. AAP was the first party to support the farmer’s march to Delhi,” they added.
The leaders said that along with this, the AAP celebrated Lohri in favour of the farmers and burnt the copies of central farm laws as a sign of protest. Delhi CM Arvind Kejriwal had also called a special session in Delhi and tore the copies of the central farm laws and protested against the Modi-led central government. Also, AAP MPs Bhagwant Mann and Sanjay Singh took every opportunity to protest against the black farm laws in-front of PM Narendra Modi. Moreover, when the farmers had reached the borders and were protesting in the blistering cold, Delhi CM Arvind Kejriwal and AAP volunteers worked day and night as ‘sewadars’ to strengthen the farmers’ movement and to make their lives easier. The AAP led by Arvind Kejriwal had arranged toilets, hot water, food and many other services for the struggling farmers.They said that Arvind Kejriwal visited the farmers twice to look at the arrangements made by his government and continuing on this same line of thought, the Aam Aadmi Party would convene a Kisan Mahasabha in support of the farmers in March. Slamming the traditional parties in Punjab, the AAP leaders said that all three parties: Congress, Akali Dal and the BJP had betrayed and backstabbed the farmers of the state. They said that all the three, being hand in glove, had passed the black farm laws and now was shedding crocodile tears to show that they were pro-farmers. “These parties have never been farmers-friendly. The SAD government in 2013 had passed the Contract Farming Act 2013 which allowed the government and the private players to convert the farmers of Punjab into bonded labour,” they added.
Later in 2017, Captain Amarinder government had passed the APMC Amendment Act, which privatised the procurement of fruits and vegetables, the effects of which are still being seen, said the leaders. They said that the Akali Dal for a very long time was in support of the farm bill and although both Sukhbir Badal and his wife Harsimrat Kaur Badal, had the power to stop these bills, when they were in an alliance with the BJP, they did absolutely nothing. “Similarly, Captain Amarinder was a part of the High Powered Committee which drafted these laws, but he raised no objection. Moreover, when the farmers were moving towards Delhi in protest, none of these parties helped the farmers in their agitation. The farmers braced the cold, the water cannons, the abuse and defamation but these leaders did not utter a word,” said the AAP leaders.They said that now, all these parties were trying to derail the farmer movement. Further lashing out at the Modi government and Captain Amarinder Singh, the AAP leaders said that the central government had planted mischievous figures into the farmer protests which converted the January 26 rally into a violent protest and Captain Amarinder did nothing to stop it. They said that after January 26, when many youth of the state went missing, Captain Amarinder made no efforts to bring them back or to get to know their condition. “However, now he is appealing to the farmer unions that they should accept the proposals of the central government. This is absolutely shameful. Captain has shown no consideration for the hundreds of lives lost, for the long months of struggle and for the entire agitation,” the leaders added.The leaders said that the preparations for the rally has already begun and in March, Punjab would see a new awakening and the hypocrisy of these parties would be exposed. They said that the AAP will not sit by and watch these parties derail the farmer protests. “The AAP will make the farmers’ movement stronger. These traditional parties would be told that no matter how hard they try they cannot kill the farmer agitation,” added the leaders.

Will make Punjab the safest state of our country : Bhagwant Mann