Channi has insulted women by calling them beggars and idles - Kejriwal 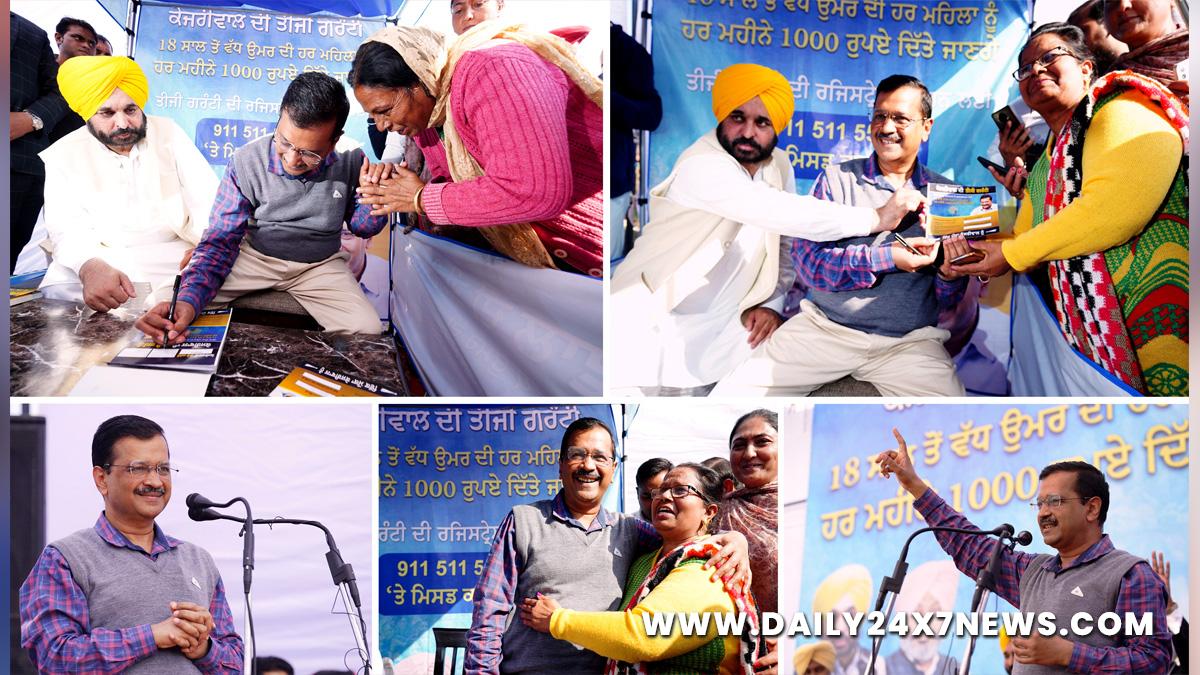 Kartarpur (Jalandhar) : Aam Aadmi Party’s (AAP) national convener and Delhi Chief Minister Arvind Kejriwal launched ‘World’s largest Women Empowerment Campaign’ and started AAP’s third guarantee registration from Sarai Khas, village of Kartarpur Assembly constituency today. In this program Kejriwal released a missed call number ‘911-511-5599’ and started the registration for AAP’s third guarantee. Kejriwal said that women just have to give a missed call at this number and they would be paid Rs. 1000 per month after the formation of AAP government in the state. Earlier on reaching Kartarpur, Arvind Kejriwal paid obeisance at Gurdwara sahib and prayed for prosperity and peace of Punjab.Addressing the women in an event organized by AAP at village Sarai Khas, Kejriwal said, “Women of our country, including Punjab, are very hard working. Rs.1000 per month is for their empowerment and to make them financially stronger. When previous rulers and political leaders, who have embezzeled millions and billions of tax payers’ money, have not become lazy and are still looting Punjab, then how come just Rs.1000 per month will make my mothers and sisters slackers.” It has been decided to give Rs.1000 to women as the third guarantee given by the Aam Aadmi Party and a registration drive has been launched from village Sarai Khas for which a mobile number ‘911-511-5599’ has been issued. The women of the state can register their names for the third guarantee by giving a missed call on this mobile number. He said that AAP volunteers and leaders would visit every area and they would register names of women to pay Rs.1000, and all women must register their names. On this occasion, Kejriwal himself registered the names of several women for a third guarantee.

Delhi to become first state to have 1,500 electric…

Kejriwal said that Punjab CM Charanjit Singh Channi has alleged that by getting Rs. 1000 per month, women will become idles. So he asked women if there is any truth in such accusations. To which women replied, “Women won’t become lazy or comforters with Rs. 1000 per month financial help. If corrupt politicians are not stopping even after digesting crores then why are they attacking when someone’s trying to help us monetarily?” Kejriwal said that that most of these leaders are questioning about the funds for this guarantee. He claimed, “Sand worth Rs 20,000 crore is being stolen in Punjab. Such mafias are active in Chief Minister Channi’s constituency. Other leaders are also involved in this theft of sand. We will form a government to stop this theft of Rs 20,000 and arrange for Rs 1,000 to be given to women out of this money and it will empower women in Punjab.” He said he’s running a successful govt in Delhi for the last seven years and if his party can do that in Delhi, then they can do same in Punjab too. He promised to improve schools, hospitals and medical equipments in the state. He claimed that once AAP govt is formed in Punjab, like Delhi, rest of the political parties will lose their ground. According to Kejriwal, “The future of Punjab will change, the future of the people will change and no other party will come to power in Punjab again.”Addressing the gathering, AAP Punjab president and Member of Parliament Bhagwant Mann said that the time has been changed and female voters of Punjab will decide their own vote and they’ll keep high inflation and unemployment of their children in their minds. He added, “No government can alleviate our poverty, such improvement is only possible through education and employment. That’s why corrupt political leaders ignore these sectors, because they don’t want our children to be educated and employed.” He said that troubled parents are sending their children abroad, but that is about to change. He asked people to give a chance to AAP and form their government so that our children can get best education and youth can get jobs. Bhagwant Mann said that facilitating people with their tax money is not Mufatkhori.On this occasion, Harpal Cheema (Leader of Opposition), Raghav Chadha (co-in charge, Punjab), Jarnail Singh (in-charge political affairs, Punjab) and Kunwar Vijay Pratap Singh and Balkar Singh were present with AAP supremo and Punjab President.