The armed forces saw a series of changes in the top hierarchy in the last two days, including new joinings in the posts of Commander-in-Chief of Andaman and Nicobar Command, Eastern Army Commander, Deputy Chief of Naval Staff and Director General of Assam Rifles.The 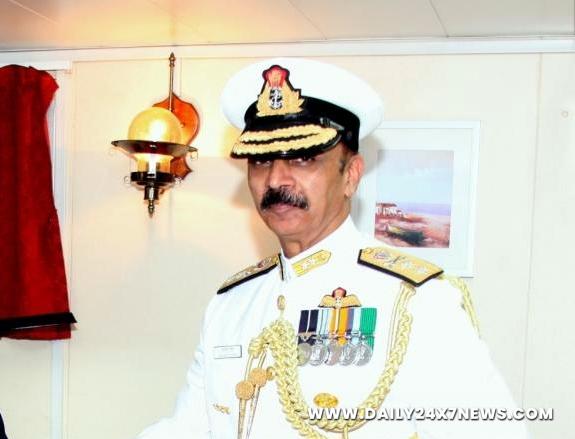 Share
New Delhi : The armed forces saw a series of changes in the top hierarchy in the last two days, including new joinings in the posts of Commander-in-Chief of Andaman and Nicobar Command, Eastern Army Commander, Deputy Chief of Naval Staff and Director General of Assam Rifles.The major reshuffle in the Indian military took place after several key posts fell vacant.Accordingly, Vice Admiral Ravneet Singh, assumed charge as the Deputy Chief of Naval Staff on Tuesday, taking over from Vice Admiral M.S. Pawar, who superannuated on May 31.Ravneet Singh was commissioned into the Indian Navy on July 1, 1983 and he specialised in aviation. The Flag Officer is a qualified flying instructor with Master Green instrument rating. He has flown HT-2, Kiran HJT 16, TS 11 Iskra, Hunter, Harrier Gr 3, Jet Provost, Chetak, Gazelle, Hawk and Mig 29 KUB aircraft during his illustrious career, the Navy said.He has commanded various frontline ships and Naval Air Squadrons, including INS Himgiri, INS Ranvijay, INS Ranvir, INAS 551B, INAS 300 as well as the premier Air Base INS Hansa. Additionally, he was also appointed Indian Defence Advisor to Kenya, Tanzania and Seychelles from 2005 to 2008.On promotion to the Flag rank, he has held key assignments of Assistant Controller Carrier Project and Assistant Controller Warship Production and Acquisition at IHQ MoD(N), Flag Officer, Goa area and Flag Officer Commanding Western Fleet at Mumbai.In the rank of Vice Admiral, the officer has tenanted the appointments of Chief of Staff at the Headquarters of Western Naval Command, Mumbai, Director General Project Seabird and Chief of Personnel at IHQ MoD.
Meanwhile, the Assam Rilfes got a new chief as Lieutenant General Pradeep Chandran Nair took over as its Director General.Pradeep Chandran Nair has rich experience of Assam Rifles and the Northeast, having earlier been an Inspector General and a Company Commander in Assam Rifles, besides having commanded Assam Rifles battalions as a Brigade Commander.The General Officer was commissioned into the Sikh Regiment in 1985. He has very vast combat experience having commanded his battalion in the Siachen Glacier and Assam.He had earlier served as Inspector General of Assam Rifles in Nagaland. Nair has been an instructor in Infantry School, Mhow, Indian Military Training Team, Bhutan, and a Directing Staff at the prominent Defence Services Staff College.He has served in the army headquarters as a Colonel, Major General and Lieutenant General. He has also served as Brigadier General Staff in Maharashtra, Gujarat and Goa and in the Defence Intelligence Agency.In other significant postings in the Indian Navy, Vice Admiral Dinesh Tripathi took over as Chief of Personnel, Vice Admiral Sandeep Naithani assumed charge as Chief of Material, and Vice Admiral Kiran Deshmukh was appointed Controller Warship Production and Acquisition.Lt Gen Manoj Pande took over the critical Eastern Command of the Indian Army based in Kolkata, while Lt Gen Ajai Singh took charge as the Commander in Chief of the Andaman and Nicobar Command.The Andaman and Nicobar Command (ANC) is crucial for the military’s planning as its the only tri-service of the country and the model for synergy based on which theaterisation of the country’s Army, Navy and Air Force capabilities is being planned.Manoj Pande had commanded an Engineer Regiment along Line of Control during Operation PARAKRAM in Jammu and Kashmir, an Engineer Brigade in Western Sector, Infantry Brigade along Line of Control in J&K, Mountain Division in High Altitude Area of Western Ladakh and a Corps in Northeast.He has varied experience in staff appointments which include the Military Secretary and Militay Operations Branches at army headquarters, Operations Branch in a Brigade headquarters in the Northeast and headquarters of the Eastern Command at Kolkata.Lt Gen Ajai Singh, who heads the Andaman and Nicobar Command now, is an armoured corps officer and a fifth generation army officer. He was commissioned in December 1983 into 81 Armoured Regiment, a regiment raised by his late father.He has also undertaken volunteer tenures for counter-insurgency operations in the Kashmir Valley and in Northeast, where he was posted at a Mountain Division on the border.As a Major with over 16 years of service, the General had also volunteered for a tenure on the Siachen Glacier and was posted to a Battalion of the Maratha Light Infantry, with whom he commanded a Rifle Company in Operations VIJAY (Kargil) and MEGHDOOT (Siachen Glacier) and received the Army Chief’s commendation for gallantry.The General has also held sensitive posts at the army headquarters as the Additional DG at the Military Operations Directorate, and has been the Director General (DG) of Financial Planning and also the Director General of Military Training.
Related Posts