Is Punjab facing an ‘economic blockade’? 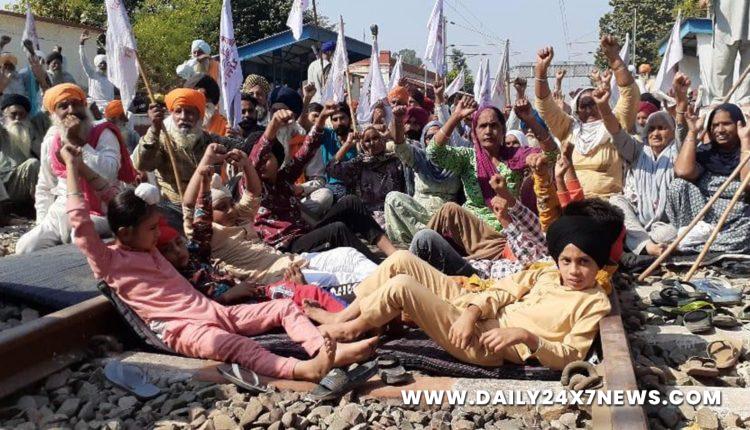 Chandigarh : Punjab’s economy, which comprises 75 per cent of the farming community, is facing derailment with the Centre virtually applying brakes to the goods trains to the state.It is already facing acute power shortage with cuts lasting up to five hours in many parts following shutting down of all five thermal facilities owing to running out of coal stocks in the wake of non-plying of goods trains in the state for over a month now.The ‘economic blockade’ has again brought to focus the much debated issue of Centre-state relationship, with some points to a federal breakdown.The bone of contention between the Congress-ruled Punjab, where the BJP has just two lawmakers in the 117-member state Assembly, and the BJP-led Central government is the amended farm laws passed by the state to counter the Central farm laws.Reacting to this development, Bharatiya Kisan Union President Balbir Singh Rajewal informed in a recent tweet that, “Modi government silently imposed economic blockade of Punjab. Lawyers please study if it is possible in democracy?”Officials told IANS the trains have been suspended in Punjab since September 24 with farmers starting the rail blockade campaign against the farm laws.Reiterating his assurance of smooth and safe goods train movement, Chief Minister Amarinder Singh on Saturday spoke to Union Home Minister Amit Shah for his intervention to ensure early resolution of the issue.As his party MPs failed to end the impasse, the Chief Minister spoke to Shah to discuss the situation and assured him that there were no law and order concerns to prevent resumption of the services for facilitating supply of essential commodities in Punjab and neighbouring states, including Himachal Pradesh, Ladakh and Jammu & Kashmir, all of which were suffering colossal losses due to the continued suspension of trains.Amarinder Singh assured that all tracks had been cleared by farmers for movement of freight trains.
The situation on the ground was totally peaceful and conducive to safe transportation of goods, he apprised the Home Minister, an official statement said.The state government, said the Chief Minister, was closely engaged with the farmer organisations to persuade them to lift their blockade completely to allow the passenger trains also to commute so that Punjabis, including the 1.5 lakh soldiers stationed in various places, could come home for Diwali.Pointing out that it was in Punjab’s interest to ensure early revival of rail services, Amarinder Singh termed as unfortunate the attempts by the opposition, including certain BJP leaders, to politicise the issue.Slamming its previous ally, SAD President Sukhbir Badal has blamed the Centre over the virtual economic blockade imposed on Punjab.In a tweet, Badal said: “Strongly condemn the Central government for not resuming train services to Punjab despite all railway tracks having been cleared.”It’s deplorable that agitating farmers are being treated as enemies of the state. Centre shouldn’t try to use heavy handed tactics against them.”Saying the Centre has virtually imposed an economic blockade on Punjab, Badal minced no words in taking a jibe at his bete noire and the Chief Minister by saying, “The CM held a one-hour ‘protest’ in Delhi solely for photo ops. Why didn’t he meet the Railways minister or the PM? Rather than standing beside the farmers, Amarinder Singh is colluding with the Centre to ensure farmers don’t get any relief.””This is an incredible level of vindictiveness of the Centre towards a state to undermine federalism,” a Cabinet minister privy to the development told IANS.”Is the BJP planning an economic blockade for Rajasthan and Chhattisgarh too as they have done the same?” he asked.The Rajasthan Assembly on November 2 passed three Bills by a voice vote to negate farms laws cleared by Parliament, following the footsteps of the Congress-ruled Punjab and Chhattisgarh.The Bills in all three states mandate that crops will be bought or sold for no less than the minimum support price and provide for imprisonment of three to seven years for harassing farmers.
However, the Bills become law only after the respective Governor’s assent, who may either withhold or decide to refer them to the President.Firing potshots at the Punjab Chief Minister, BJP national President J.P. Nadda last week expressed concern over the continued suspension of goods trains by the Indian Railways and hit back with an open letter, holding Amarinder Singh “fully responsible” for the current impasse.”The Government of India is very keen to run trains in the state of Punjab, but unfortunately you are not performing the role that is expected of you and your government in the state of Punjab,” Nadda wrote.But in the battle of ‘supremacy’, the situation in Punjab has turned literally grim, admit government functionaries.They say snapping of rail links severely impacted the electricity generation and shortage of urea and diammonium phosphate (DAP) have badly hit the sowing of wheat during the Rabi season.The requirement of urea in the state is 13.5 lakh metric tonnes, whereas the availability is almost nil. Likewise, against the requirement of six lakh metric tonnes of DAP its availability is just marginal.Before the snapping of rail links, the state was loading around 30-35 rakes per day.As per the government estimates, the movement of foodgrains has been too hit. A total of 10 lakh metric tonnes of foodgrains has got affected.Fearing the strained relations may spoil peace, the Chief Minister has warned many a time that any move by the Central government to tinker with religion or livelihood of the people would trigger resentment and anger.Leading a protest at Delhi’s Jantar Mantar last week to get “justice for the poor farmers”, the Chief Minister warned that failure to resolve the issues of the farmers would cause unrest, which both China and Pakistan would try to exploit.Amarinder Singh said as state’s Home Minister, he was aware of the threat at the borders with Pakistan smuggling drugs and weapons via terrorists and gangsters into Punjab with the help of one to three drones every day.With only 1.57 per cent of the country’s total population, Punjab contributes 40 per cent to the national food pool.