He is a five-term legislator who wields undeniable political clout in his constituency, Mau. He has won five consecutive elections — two of them as an independent — and his absence from his constituency apparently makes him stronger because he has won the 2007, 2012 and 2017 polls from inside the jail.Mukhtar Ansari, 57, is a typical example of criminals in Uttar Pradesh, who 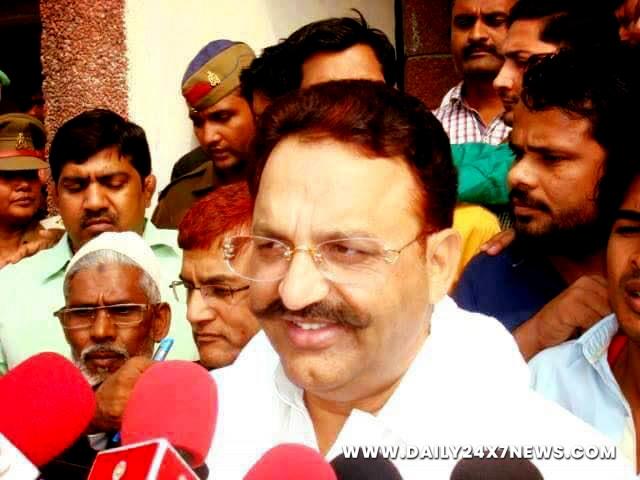 Lucknow : He is a five-term legislator who wields undeniable political clout in his constituency, Mau. He has won five consecutive elections — two of them as an independent — and his absence from his constituency apparently makes him stronger because he has won the 2007, 2012 and 2017 polls from inside the jail.Mukhtar Ansari, 57, is a typical example of criminals in Uttar Pradesh, who enjoy a Robinhood image and are almost revered by their people.They snatch contracts worth crores of rupees — invariably through means that are not exactly free and fair — but they generously help the poor.Mukhtar Ansari’s journey into the underworld began in the 1980s when organized crime gained roots in Uttar Pradesh.Ansari was originally a member of the Makhanu Singh gang.In the 1980s, this gang clashed with another gang led by Sahib Singh, over a plot of land in Saidpur, resulting in a series of violent incidents.Brijesh Singh, a member of Sahib Singh’s gang, later formed his own gang and took over Ghazipur’s contract work mafia in the 1990s.Ansari’s gang competed with him for the control of the Rs 100 crore contract business, which spanned in areas such as coal mining, railway construction, scrap disposal, public works, and liquor business.The gangs were also involved in running protection and extortion rackets, besides other criminal activities such as kidnappings.He entered politics around 1995 through the student union in the Banaras Hindu University, became an MLA in 1996 on a BSP ticket.In 2002, Singh ambushed Ansari’s convoy. Three of Ansari’s men were killed in the resulting shootout. Brijesh Singh was critically injured and presumed dead.
Ansari became the undisputed gang leader in Purvanchal.However, Brijesh Singh was later found to be alive, and the feud resumed.To counter Ansari’s political influence, Singh supported the election campaign of the BJP leader Krishnanand Rai. Rai defeated Mukhtar Ansari’s brother and five-time MLA Afzal Ansari from Mohammadabad in the 2002 Uttar Pradesh Assembly elections.Ansari has shrewdly used the Muslim vote bank to ensure his victory during the elections in the Ghazipur-Mau area.His opponents tried to consolidate the Hindu votes, which are divided on the caste lines.The mix of crime, politics, and religion led to several instances of communal violence in the region. After one such riot, Mukhtar Ansari was arrested on the charge of inciting people towards violence in 2005.He has been in jail since then — almost 16 years now.Incidentally, Mukhtar Ansari is the proverbial black sheep in a family of illustrious leaders.His grandfather, Dr Mukhtar Ahmed Ansari, was the Congress party’s president in 1927-28. He also holds a distinction of heading the Muslim League, too, where he fell out with Mohammad Ali Jinnah. He was also one of the founding members and former vice chancellor of Jamia Millia Islamia.The don’s maternal grandfather, Brigadier Mohammad Usman Ansari, referred to as ‘Lion of Nowshera’, was a Mahavir Chakra awardee.Mukhtar’s son Abbas Ansari is a national-level Indian shooter who has won medals and accolades internationally.”In most of the cases, Mukhtar has been booked for criminal conspiracy and the cases were set up against him for political reasons. We have faith in the judiciary and that does not waver. We do not wish to contest the media trial that is going on,” said his elder brother Afzal Ansari, a BSP MP.Talking about the Krishnanand Rai murder case, Afzal said that Mukhtar was already in jail when the murder took place. He has been charged for conspiracy in the case.