Takes stock of the work and progress on upcoming Zojila tunnel 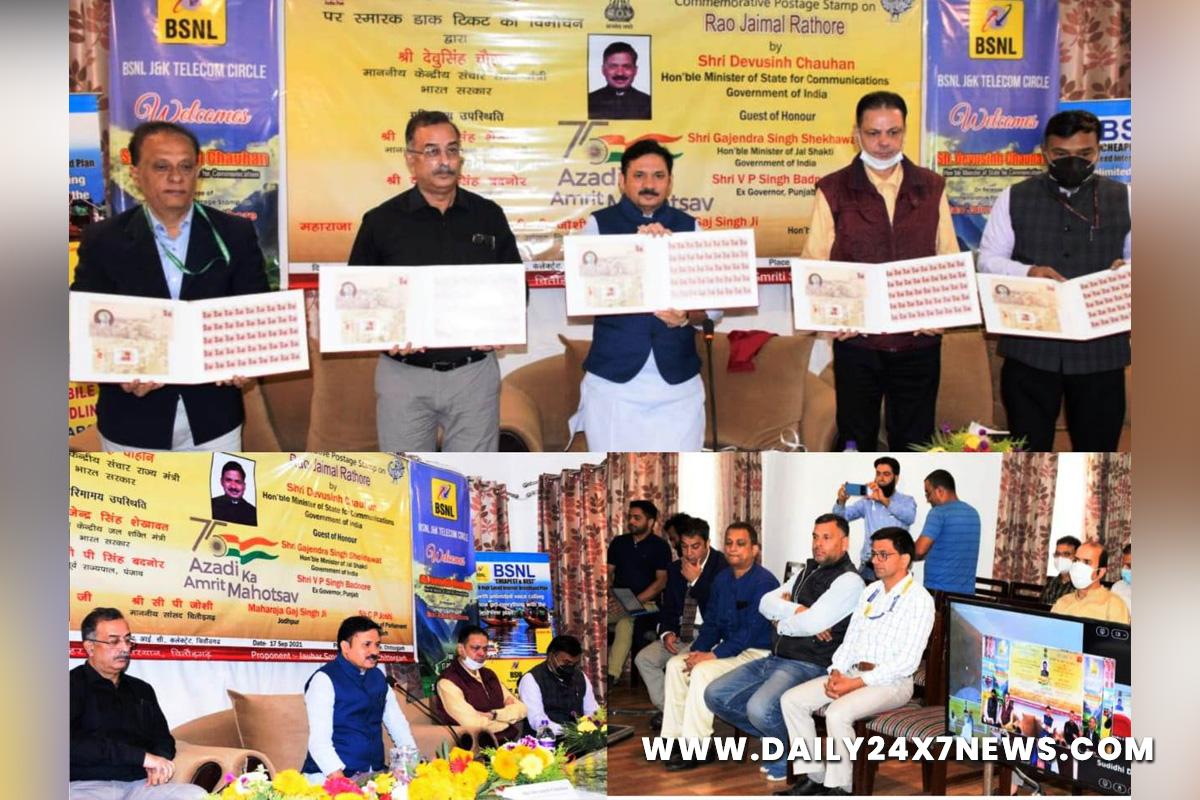 Sonamarg (Ganderbal) : In the run up to the celebrations of 75th Azadi ka Amrit Mohatsav, Union Minister of State (MoS) for Communications, Shri Devusinh Chauhan today launched a commemorative postal stamp in the honour of Rao Jaimal Rathore on his 515th birth anniversary here.Rathore was a Rajput warrior general of Chittorgarh who put up a defiant resistance against vast Mughal army during its siege in 1567-1568.On the occasion the Minister said that he counts himself fortunate to get the chance of releasing postage stamp commemorating such a brave soldier. He maintained that the brave heart not only made the people of Rajasthan proud but whole nation feels pride to have him.Shri Chauhan said that when the nation is celebrating its 75th Azadi ka Amrit Mahotsav, it should be our real endeavor to remember these unsung heroes of our history. He said that such national heroes deserve to be recognised and remembered for the bravery and valour they depicted in safeguarding this land and its people.The Minister appreciated the idea of releasing postal stamps in memory of such national heroes. He hoped that more such commemorations should be organised in future. He called them as lessons to inspire our youth and make them aware about their valiant past.The Union Minister of Jal Shakti, Shri Gajendra Singh Shekhawat, who participated virtually in the event said that the contribution of the warrior is such that even after passing of more than 500 years the memory is preserved in human psyche.

He said that such stories as that of Rao Jaimal Rathore needs to be told to our children and youngsters.Eulogising further, Shri Shekhawat, who was guest of honour on the occasion said that the story has power to inspire and motivate our youth towards national service. He recalled that such was the gallantry of this general that his statue on elephant back has been erected inside Agra fort.CP Joshi, MP Chittorgarh, who also participated virtually said that the great soldier fought despite receiving bullet in his foot. He said that his laying of life in protecting his land is worth writing in golden letters.Others who spoke virtually include Shri VP Singh, Ex-Governor Punjab; Maharaj Gaj Singh and other legislators and officers from Rajasthan.The stamp was released in a virtual mode simultaneously from IT Centre, Chittorgarh Rajasthan.The other officers present on the occasion were Shailendra Dashora, Chief Postmaster General J&K Circle; Sanjeev Tyagi, Chief General Manager Telecom, BSNL,J&K Circle; KC Panday, DDG (Admin) J&K LSA; RK Jaiswal, GM BSNL Srinagar and MG Mufti, GM BA BSNL Srinagar along with other officers from respective departments.Later on Chauhan also visited the under construction Zojila tunnel. He took stock of the work and progress on this prestigious project. He asked the executing agency to maintain highest standards of quality besides completing the project at the stipulated deadline.The Minister was apprised that the tunnel is 14.15 kms long and would be completed at an estimated cost of Rs 2100 crores. It would reduce travel time between Srinagar and Leh by nearly 3 hours, as was said to the Minister.Shri Chauhan also paid obeisance at Mata Kheer Bhawani Mandir at Tulmulla, Ganderbal and prayed for eternal peace, harmony and development of the nation.