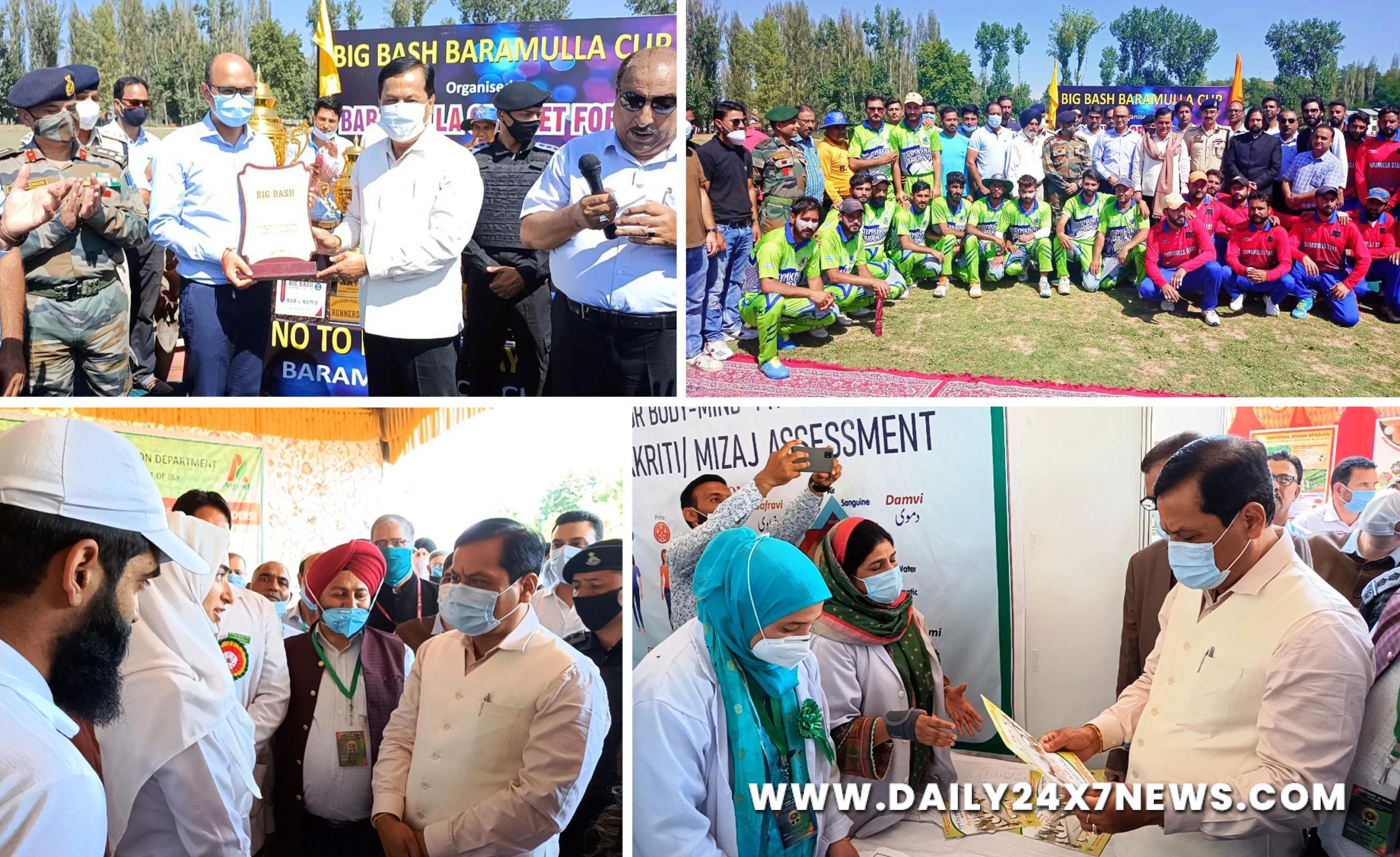 Baramulla : As part of the Union Government’s public outreach programme, Union Minister of AYUSH and Minister for Ports, Shipping and Waterways Sh. Sarbananda Sonowal visited Baramulla district today.Sh Sonowal inaugurated a Yoga Demonstration cum AYUSH Exhibition wherein young athletes showcased their yoga skills. He also inspected the stalls installed by the Department of AYUSH were depicting different practices and medical procedures.The minister also presided over a seminar titled “AYUSH Intervention with Special Focus on AYUSH Health and Wellness Centres for Development of Modern Kashmir”.Complimenting the participants who attended the seminar, the Union Minister highlighted the significance of AYUSH medicare services and said that good public health through the intervention of innovative and traditional practices is the top most concern of the government.Additional Chief Secretary Health and Medical Education, Vivek Bardwaj, DDC Chairperson Baramulla Safeena Beigh, Deputy Commissioner Baramulla Bhupinder Kumar, Director AYUSH Dr Mohan Singh, Director General Council for Research of Unani Medicine Dr Asim Ali, medical practitioners among other senior functionaries attended the seminar.The Minister also said that institutions of AYUSH are being strengthened at grass root level and every possible step shall be taken in this regard. He added that the Ministry is working in collaboration with Ministry of Health and Family Welfare for giving people a happy and healthy life.

The minister further added that special thrust shall be given for establishing a research lab where scientific study on medicinal herbs shall be carried out so as to explore their benefits.Underlining the need of Unity in Diversity for a strong nation, the Minister added that the ambitious “Azadi ka Amrit Mohatsav” initiative is a unifying factor where all sections of the society converge and excel. He said that youth take keen interest in Yoga as it plays a vital role in changing our life. He also advised to at least spend 05 minutes on Yoga practices as it yield quick and effective results.The Minister also said that the Union Government headed by Prime Minister Narendra Modi has a good dream for development of Jammu and Kashmir, and added that Government of India is working on various flagship programmes aimed to develop socio economic status of the people.Later, the Minister inaugurated a local cricket tournament titled “Big Bash Tournament Cup” at Showkat Ali Stadium that was organised by Baramulla Cricket Forum in collaboration with District Administration.After kick-starting the tournament, the Minister applauded the young and energetic players for showing their enthusiastic participation. He termed sports as a viable platform for channelising potential of dynamic youth besides keeping them away for wrong pursuits like drug addiction, anti social activities etc.While emphasizing upon the youth to come forward, the Minister said that several novel measures are being taken as part of youth engagement programme which aims to empower them and direct them towards productive pursuits. He appreciated the efforts of local administration for organising such sports events and assured every support on the part of Union Government.