The saga of damage and desecration of mosques in Kashmir 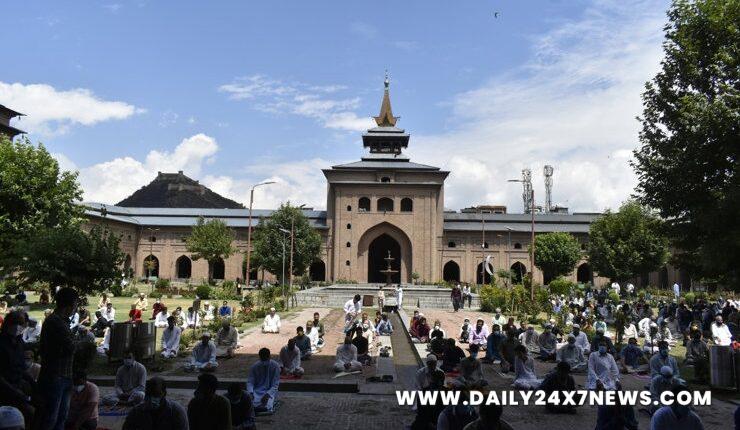 Srinagar : The damage caused to the village mosque at Hadipora in southern Kashmirs Shopian district during an encounter between the security forces and the militants on 9 -10 April has outraged the local population but, in contrast to some previous incidents, the public anger this time around is unmistakably against the militants.Three militants, including a 14-year-old child guerrilla recruit Faisal Ganai, were killed in the encounter that happened around the place of worship in which the militants were hiding and firing out on the troops. The gunfight left some of the mosque’s windows ripped and the interiors damaged, even as the troops avoided using rockets and improvised explosive devices that quite often destroy a targeted structure.Minutes after the spot was sanitised and the security forces withdrew from the village, 20-odd militant sympathisers made unsuccessful attempts to stage a massive demonstration against the troops for the damage caused to the mosque. Just a few gathered as most of the residents began implicitly and explicitly blaming the militants. Some of them, not willing to be named, said that they had been deprived of the place of worship at the very beginning of the holy month of Ramadan. “Had they not been hiding in the mosque, there wouldn’t have been any damage to it”, said a middle-aged orchardist.Partly for the damage caused to the mosque and partly for the fact that a young boy and the only brother of his four sisters became a casualty in the encounter, even the militants disowned their slain associates. Videos of Faisal Ganai’s parents, grandparents and four young sisters beseeching the militants to release the teenage recruit went viral in the social media and generated a palpable public anger.Reacting to some media reports, Albadar Mujahideen issued a rare statement, claiming that the militants killed in the Shopian gunbattle were not their cadre. The statement claimed that they had been recruited by an Afghanistan-based radical outfit Ansar Ghazwatul Hind. The statement called them as ï¿½martyrs’ but insisted that recruitment of child guerrillas was not permitted in Albadar.
Even as a robust ecosystem of the valley’s separatists and militants chose to remain mum, there were unsuccessful attempts to raise the religious passions and put the blame as usual on the Police and the security forces. According to senior Police officers, a photojournalist posted an image of a blood-soaked Quran on her Twitter handle and claimed that the Holy Scripture was splashed with the blood of a slain militant inside a mosque in Shopian.”It prima facie suggested that someone was provoking the masses for violence with fake and false news. During a quick fact checking exercise, we found that it was actually the image of a Quran damaged during a suicide strike on the religious preacher Al-Bouti inside the Al-Iman mosque in Mazraa district of Damascus in Syria some years back. 42 persons had been killed and 84 left injured in that attack”, said a senior Police official. “The photojournalist has deleted the objectionable tweet but we are initiating necessary legal action”, he added.The Jammu and Kashmir Police sought peoples’ condemnation to the militants’ trail of misusing the mosques in Kashmir as their shelters and hiding places during the counterinsurgency operations in recent times.”#Terrorists have misused #mosques for terror attacks i.e, Pampore on 19/6/20, Sopore on 1/7/20 & Shopian on 9/4/21. General public, Masjid Intizamia , Civil Societies & Media should condemn such acts: IGP Kashmir”, Zonal Headquarters of the J&K Police in Kashmir tweeted.Apart from the three major incidents in 2020-21, scores of the mosques, shrines and other religious places have been damaged or fully destroyed in different encounters in Kashmir in the last 30 years of militancy.
In the very beginning of the insurgency, militants of a group active in downtown Srinagar were found hiding in the domes of a major mosque in Srinagar in 1989. Quite a number of them were seized alive from the mosques. An Islamic library gutted in a mysterious blaze near the revered Hazratbal shrine in 1992. Later in October 1993 and March 1996, the JKLF militants occupied the shrine. In 1993, they were given a safe passage but in 1996 they gunned down four Police personnel, resulting in the killing of around 30 militants.In 1994-95, one of the heavily armed groups of the militants, led by ï¿½Major’ Mast Gul of Pakistan, occupied the second most revered shrine of the valley at Chrar-e-Sharief in Budgam district. The standoff culminated into a fierce encounter on 11 May 1995 when Mast Gul and his militants set the shrine of the 14th century Rishi saint Sheikhul Aalam Sheikh Nooruddin Noorani along with a historic monastery and a mosque and a major portion of the town on fire. Some of the militants got killed but Mast Gul managed to escape with many of his associates.Militants also attacked and looted the weapons of the Police guards at a number of the protected shrines. On several occasions, they entered and shot dead their soft targets inside the mosques. At one mosque in Sogam, Kupwara, they grabbed a civilian during the congregational prayers and left him beheaded at the entrance.