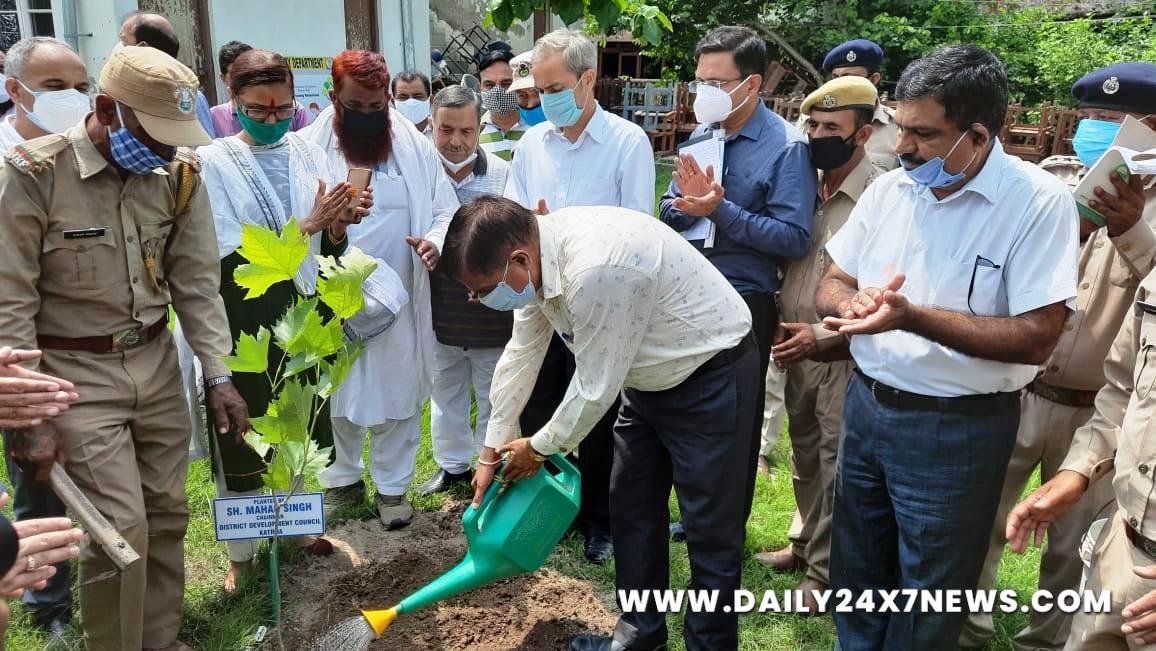 Kathua : To mark the celebration of Van-Mahotsav, a Green J&K Plantation Drive was organized by the Social Forestry Division Kathua in the premises of Govt. Degree College for Women, Kathua today.Chairman, District Development Council Kathua, Col (Rtd.) Mahan Singh, was the Chief Guest, who started the Plantation drive with the ceremonial planting of a Chinar sapling in the College premises. Around 200 saplings of different indigenous ornamental, shade bearing, fruit bearing, medicinal and timber yielding species were planted.While speaking on the occasion, the DDC Chairman appreciated the role of Social Forestry Department in increasing the green cover of the Union Territory and benefit accrued to the people to meet their local demands of grass, leaf fodder, fuel wood, small timber and other forest produce. He appealed to the local people, members of the PRIs, Students, NGOs & other Stakeholders to come forward and participate in such Plantation drives.

The Principal Chief Conservator of Forests/ Director, Department of Social Forestry, J&K, Roshan Jaggi, informed that during the rainy season every year, the Department of Social Forestry celebrates Vanmahotsav by carrying out many such Plantation drives. He said that the way climate change is causing miseries to the people & resulting in weather-related disasters, the only way to protect the human race is by planting more and more trees. He also intimated that the Plantation drives are being carried out at Panchayat levels involving the members of the PRI and locals and the department is also distributing saplings to the people to carry out such plantation drives.A theme based cultural programme was also presented during the event.Among other dignitaries who participated in the Vanmahotsav function & Green J&K Drive were Deputy Commissioner, Rahul Yadav, Regional Director, Social Forestry, Mohinder Gupta, DDC members, BDC members, Chairmen of the Village Panchayat Plantation Committees, DFO Social Forestry Division Kathua, Munish Bhardwaj, Wild Life Warden Kathua Vijay Verma and concerned officers of different departments.