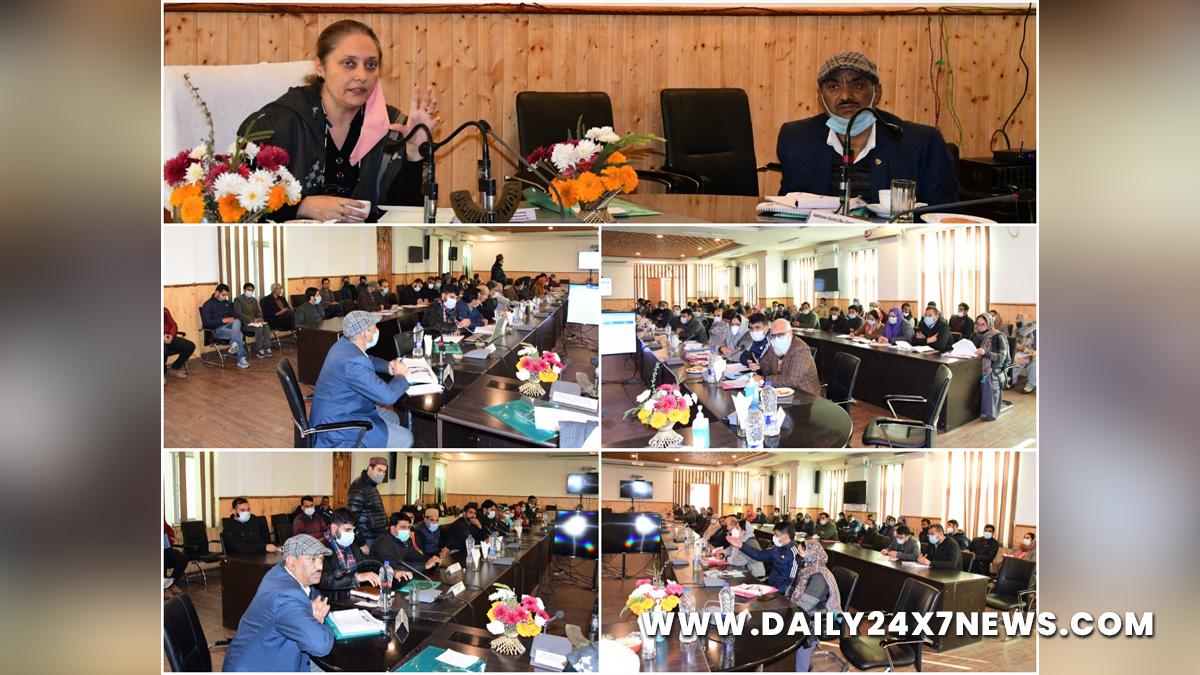 Ganderbal : Secretary, Social Welfare Department, Sheetal Nanda, who is also Incharge Secretary for development of Ganderbal, today visited the district to review status of development works being executed there.In this regard, Sheetal chaired a meeting to take stock of progress on various ongoing development projects and welfare schemes being implemented in the district.The meeting was attended by Additional District Development Commissioner, Ganderbal, Pir Muzafar Ahmad, Additional Deputy Commissioner, Farooq Ahmad Baba, SDM Kangan, SEs PWD (R&B) and KPDCL besides other concerned district officers.ADDC presented a detailed account of various development works being taken up under different sectors in the district. He also briefed the meeting about the progress on schemes like MUDRA, MUMKIN, SAKSHAM, TEJASWANI and other Centrally Sponsored Schemes including PMAY, MGNREGA, SBM, Pradhan Mantri Ujwala Yojana, NRLM, PMKISAN, AYUSHMAN BHARAT and others.Sheetal reviewed the status of various projects under languishing programme, B2V and Capex 2021-22. She impressed upon the officers to speed up the pace of work on these projects for early completion.Secretary stressed for regular monitoring of development works for effective implementation besides directing for completion of vital projects in the district within the set timelines.

While reviewing the education sector, Secretary emphasized the need for further raising literacy rate in government schools located in far off areas of the district.Secretary also took brief review of winter preparedness of district administration. She asked the SE, KPDCL Ganderbal to give wide publicity to curtailment schedule ensuring strict adherence to the same.Regarding AYUSHMAN BHARAT, the ADDC said that over one lakh forty thousand beneficiaries have been registered and provided golden cards.While reviewing pendency under J&K Building and Construction Welfare Board, she directed the Assistant Commissioner Labour to share the list so that funds are released accordingly.Secretary asked the officers for achieving 100 percent saturation in all schemes concerning their respective departments.She asked the DSWO to raise massive awareness regarding all their scholarship schemes through awareness camps so that maximum beneficiaries are covered.She asked the ADDC to plan out a schedule for holding special camps at panchayat level involving health and ICDS department besides PRIs to educate the masses about the importance of balanced diet for a healthy life.Later, Secretary met DDCs, BDCs and ULBs who put forth various demands pertaining to development of their respective areas and sought her intervention for timely disposal.Responding to local issues and concerns, Secretary assured that all these would be taken up with the concerned departments for an early redressal.Later, Secretary inaugurated newly constructed three storey school building at Girls Higher Secondary School Ganderbal constructed with a cost of Rs 1.99 crore. She also inspected progress on construction of Old Age Home at Pandach.