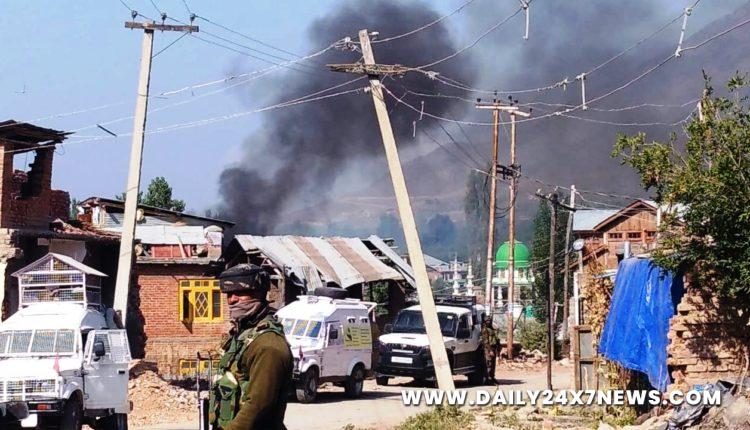 Anantnag : Two top commander of Lashker-e-Toiba were killed in an overnight encounter with a joint team of police, army and CRPF in Bijbhera area of south Kashmir, inspector General of Police Vijay Kumar said on Friday.“Two top commanders of LeT were killed in the gunfight. Militants tried to flee and they were located in a house. We fired and used some explosives also. Abu Rehan of Pakistan who was active from March 2019 and involved in many killings besides Adil Asif Bhat of Kakapora Pulwama were killed,” the IGP told a presser here as per GNS correspondent.“Recently you would recall as can be seen in CCTV footage that (Bhat) killed two policemen at Nowgam. He had fled with INSAS rifle which was also recovered. I congratulated police and other security forces,” he added.A police spokesperson said On Thursday at about 1800 hours, based on specific input about presence of militants in village Sirhama, a joint cordon and search operation was launched by Police, army’s 3RR and CRPF in the area.
“During the search operation, as the presence of (militants) got ascertained they were given opportunity to surrender however instead they fired indiscriminately upon the joint search party, which was retaliated leading to an encounter”. Due to darkness, he said, the operation was suspended and the whole area was put under strict cordon. “Militants trapped inside made certain attempts to break the cordon and escape from the spot.”In the wee hours, he said, the operation was resumed and in the ensuing encounter two militants were killed and their bodies were retrieved from the site of encounter.As per police records, the killed militants had a history of militant records, he said, “They were involved in planning and executing several attacks including civilian atrocities and attacks on security establishments. Adil was involved in case FIR No. 117/2020 of PS Nowgam pertaining to the killing of two JKP personnel and weapon snatching at Nowgam Srinagar on 14-08-2020.” Moreover, Abu Rehan was an important motivator and influenced young minds for joining militant ranks in the areas of South Kashmir, the spokesperson said. “He was involved in motivating local youth to carry out Fidayeen attacks on Police/SFs. He was also involved in providing logistic support to the newly infiltrated militants and strengthening the LeT outfit throughout the valley by distributing newly joined and infiltrated militants to various areas.”“Keeping in view the prevailing pandemic due to COVID-19 and to ensure the safety of people from inherent risk of contracting the infection, the bodies (were) sent to Handwara for burial after completion of all medico-legal formalities.” (GNS)