Appreciates Central Government for good work during past 20 months since the revocation of article 370.

As part of ‘Seva Hi Sangathan’ to mark the completion of seven years of the Modi-led government at the Centre,” party spokesperson and Rajya Sabha MP Syed Zafar Islam in Collaboration with Indian Army & Ngo RNAF Foundation distributed 1500 ration kits among the needy families in Kashmir. As per the party spokesperson, they distributed relief material in Gund-i- 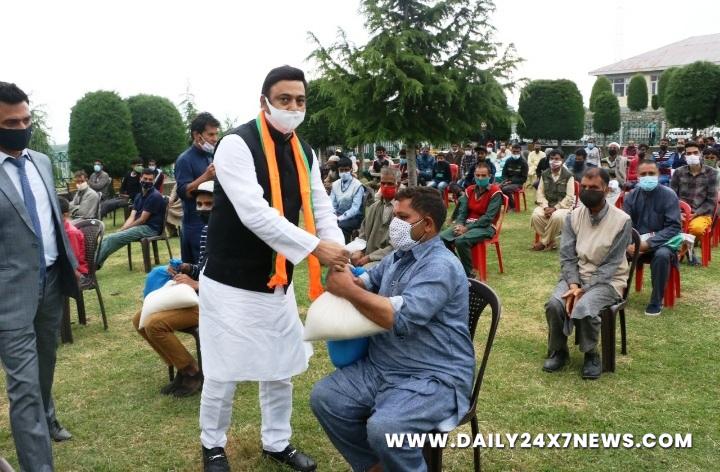 Srinagar : As part of ‘Seva Hi Sangathan’ to mark the completion of seven years of the Modi-led government at the Centre,” party spokesperson and Rajya Sabha MP Syed Zafar Islam in Collaboration with Indian Army & Ngo RNAF Foundation distributed 1500 ration kits among the needy families in Kashmir. As per the party spokesperson, they distributed relief material in Gund-i-Hasebait, Arampora & Gom Ahmadpora, Panzipora Ground, North Campus, Delina to celebrate the completion of seven successful years of the Hon’ble Prime Minister Narendra Modi Ji’s government. On this occasion, the party spokesperson and Rajya Sabha MP Syed Zafar Islam handed out food and other relief material to the 1500 needy families who were on the India Army’s list of needy. Most of the recipients were the families who had lost their loved ones to Covid-19. They also included children who lost their parents due to the virus and widows whose husbands also died in the pandemic. Syed Zafar Islam conveyed his heart-felt condolences to the families who have lost their members to the virus. He said the entire country was fighting against this deadly pandemic under the able leadership of Hon’ble Modi ji. “We conquered the first phase of the pandemic under our Prime Minister. The second wave was sudden and more deadly than the first and yet our PM took matters into his own hands after he felt that several state governments were unable to cope with the second wave.” Syed Zafar said that the PM’s focus has been on arresting the spread of the disease, but at the same time getting the population vaccinated and providing free ration to the needy, as was done during the first wave. He also thanked the Army to identify and share the details of those who needed the ration and other help the most .
The BJP launched the Seva Day in 100,000 villages across the country on May 30.Crores of the party are visiting door-to-door, giving information on the pandemic and urging them to take all precautions against the pandemic. Besides, the BJP is also making arrangements of food and other essential commodities to those who need help.The BJP MP also noted the good work the state administration has done in the last 20 months since the revocation of article 370.He said, “what our government has done in the last 20 months was not done by four generations of the previous governments, ruled only by three families. Future elections will certainly increase the power of local people”. Elaborating on what has been done so far in the last 20 months, Syed Zafar said that many works were done in the health sector in Kashmir; a 3490 MW hydro power project has been completed; nearly all the houses have been given electricity: electricity has been given to 3. 57 lakh families; every farmer is getting Rs 6,000 in his account. He further said that eight lakh students are being given scholarships through DBT. Today the children have pens and cricket bats in their hands rather than guns, there is also a proposal to connect Kashmir with rail service by the year 2022, Inshallah! This will also be completed in time. In Jammu and Kashmir, before 2022, 25 thousand jobs will be given to the unemployed. The Jammu and Kashmir administration has prepared a land bank of 29 thousand 30 kanals. This will give land to the industries. “Now everything will be better for your progress, the Modi government is committed to flow the development stream in the state, your progress is our aim”, the BJP MP said. On the occasion BJP Youth leader & Media In-charge Kashmir Manzoor Bhat said BJP was the first party who reached grassroots and distributed Dry Ration kits, Food packets, Sanitizers across the valley while around 1lac masks were also distributed among the people. Bhat said hundreds of the workers of the party were inspired by Prime Minister Narendra Modi’s motto of ‘Seva hi Sangathan’ (the basis of organization is service).