Metro Rail Project in J&K to be approved by next week; LPG Gas Pipeline for J&K to be given a top priority : Hardeep Singh Puri 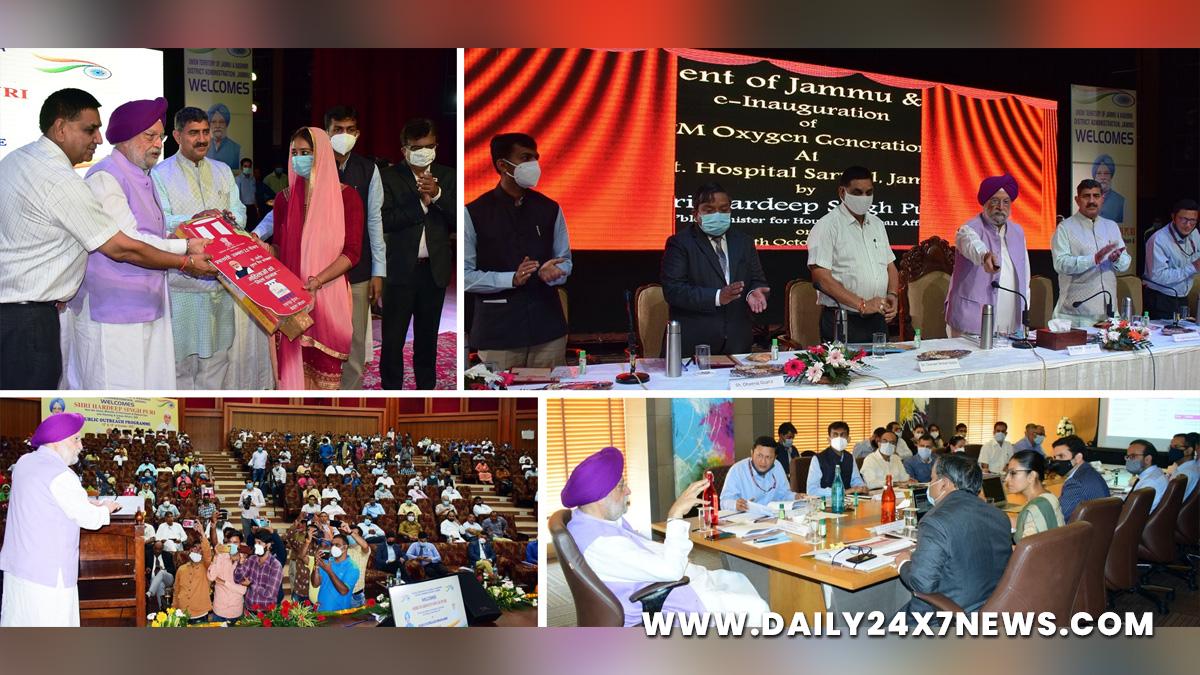 Jammu : As part of ongoing ‘Public Outreach Programme’ in J&K, Union Minister for Petroleum & Natural Gas and Housing & Urban Development, Shri Hardeep Singh Puri today said that Prime Minister Shri Narendra Modi’s Development Model emphasises that the benefits of every centrally sponsored scheme should reach directly to the beneficiaries be that of the Ujjwala Yojana, Ayushman Bharat, PM Awas Yojana or others. Shri Puri said this while e-inaugurating and laying e-foundation stones of many development projects of Jammu city at Convention Centre, Jammu.Praising the Prime Minister for his steps taken vis-a-vis Swachhta Abhiyan in the country, Shri Hardeep Singh Puri said that the PM had emphasised from the ramparts of Red Fort in 2014 that it would be a great tribute to the Father of Nation if India becomes Open Defecation Free (ODF) on the 150th birth anniversary of Mahatma Gandhi. The Minister mentioned that the same is happening today when the country has achieved almost all the physical targets under ODF by constructing the individual household toilets, public toilets, community toilets and J&K is one among those ODF States/UTs which is a matter of pride for us.Shri Puri also said that the success behind implementation of Swachhta Abhiyan in almost every part of the country is that the programme was not restricted to only government quarters but was made a ‘Jan Andolan’ under PM Sh. Narendra Modi.The Minister also said that the Metro Rail Project in J&K will be approved by next week and the demand of LPG Gas pipeline for J&K will also be given a top priority by the Government.Shri Puri further said that there is no compromise on the development agenda and timelines are set before for the completion of projects like the deadline for Central Vista Project has been set which will be completed before 26th January, 2022. He also mentioned that the projects are being completed before their deadlines under the current government.

Saying that many schemes under the present government are reaching to their saturation points, the Minister said that under PM Ujjwala Yojana 1.0, eight crore LPG connections have been provided to the beneficiaries. He also said that timely implementation of all schemes has been stressed by this Government.The Minister also said that after the abrogation of Article 370, the development projects that were languishing from years in J&K, have been taken up and many have been completed in these years. He further mentioned that the development paradigms have now changed in J&K which is evident from the fact that the development works have achieved a pace under the new administration and are now completed within a timeline in J&K.On the occasion, the Minister distributed assistance to beneficiaries under various Government schemes – PMAY, MUMKIN, Sub-Mission on Agricultural Mechanization (SMAM), Mission for Integrated Development of Horticulture (MIDH), PM Ujjwala and PM Svanidhi (Street Vendor Card Distribution).Shri Puri also e-inaugurated 800 LPM Oxygen Generation Plant at Government Hospital, Sarwal, Jammu, Integrated Solid Waste Management System in 78 ULBs, Façade Lighting &Illumination of Bahu Fort, 164 KLD Septage Treatment Plant at Bhagwati Nagar, Revamping of Urban Infrastructure in 76 ULBs. The Minister also laid e-foundation stone of Facade Lighting at four Tawi Bridges &Construction of R.C.C Nallah & Development of Park (phase-II) in lower Roop Nagar.Shri Jugal Kishore Sharma, Member of Parliament from Jammu said that after Sh. Narendra Modi took oath as the PM of India, many new schemes and programmes have been launched for the welfare of the people. He also said that a new dawn of development has been set in J&K after the abrogation of Article 370 which is evident from the fact that the benefits of schemes & programmes are reaching to its actual beneficiaries in J&K.

My complexion may be dark but my intentions very…

Chander Mohan Gupta, Mayor Jammu Municipal Corporation; Sh. Pankaj K. Singh, Joint Secretary, Housing and Urban Development, GoI; Sh. Dhiraj Gupta; Principal Secretary, Housing and Urban Development Department, J&K; Sh. Sujoy Chaudhary, Executive Director, IOCL; Sh. Anshul Garg, DC Jammu and Avny Lavasa, Chief Executive Officer JSCL were also present in the function.Earlier, Union Minister chaired a meeting to review the implementation of flagship schemes and initiatives taken by Housing and Urban development Department for implementation of these schemes.Principal Secretary, HUDD Dheeraj Gupta, during the power point presentation, apprised the Minister regarding the flagship schemes including AMRUT, SBM(U), Smart Cities Mission, PMAY-U, PM-SVANidhi.It was apprised to the Minister that there are total 62 projects have been completed out of 83 projects under AMRUT and other 21 projects are going to be completed soon. Under Swachh Bharat Mission 51246 individual household toilets have been constructed so far. Under PMAY –U, more than 55 thousand houses have been sanctioned and 11 thousand houses have already been completed. It was further informed that there are 133 projects under Jammu Smart City out of which 35 stands completed and 45 are in process where as Srinagar Smart City has 137 projects out of which 42 have been completed and 33 are in progress. Under PM- SVANidhi 14311 cases were sanctioned and 13311 cases have been disbursed.The Minister stressed on the concerned authorities to take all possible measures to accelerate the pace of various ongoing works on different projects for their time-bound completion. He emphasized on completion of all the pending works on priority so that the aspirations of the public are met.The Minister exhorted for mobilizing men and machinery for completing the projects in stipulated time frame besides urged to ensure productive and fruitful utilization of the available resources.Joint Secretary, Housing and Urban Development, GoI; Pankaj Kumar Singh; Deputy Commissioner Jammu Anshul Garg; Chief Executive Officer JSCL, Avny Lavasa and senior officers of the concerned departments were present in the meeting.

My complexion may be dark but my intentions very clear : Arvind Kejriwal