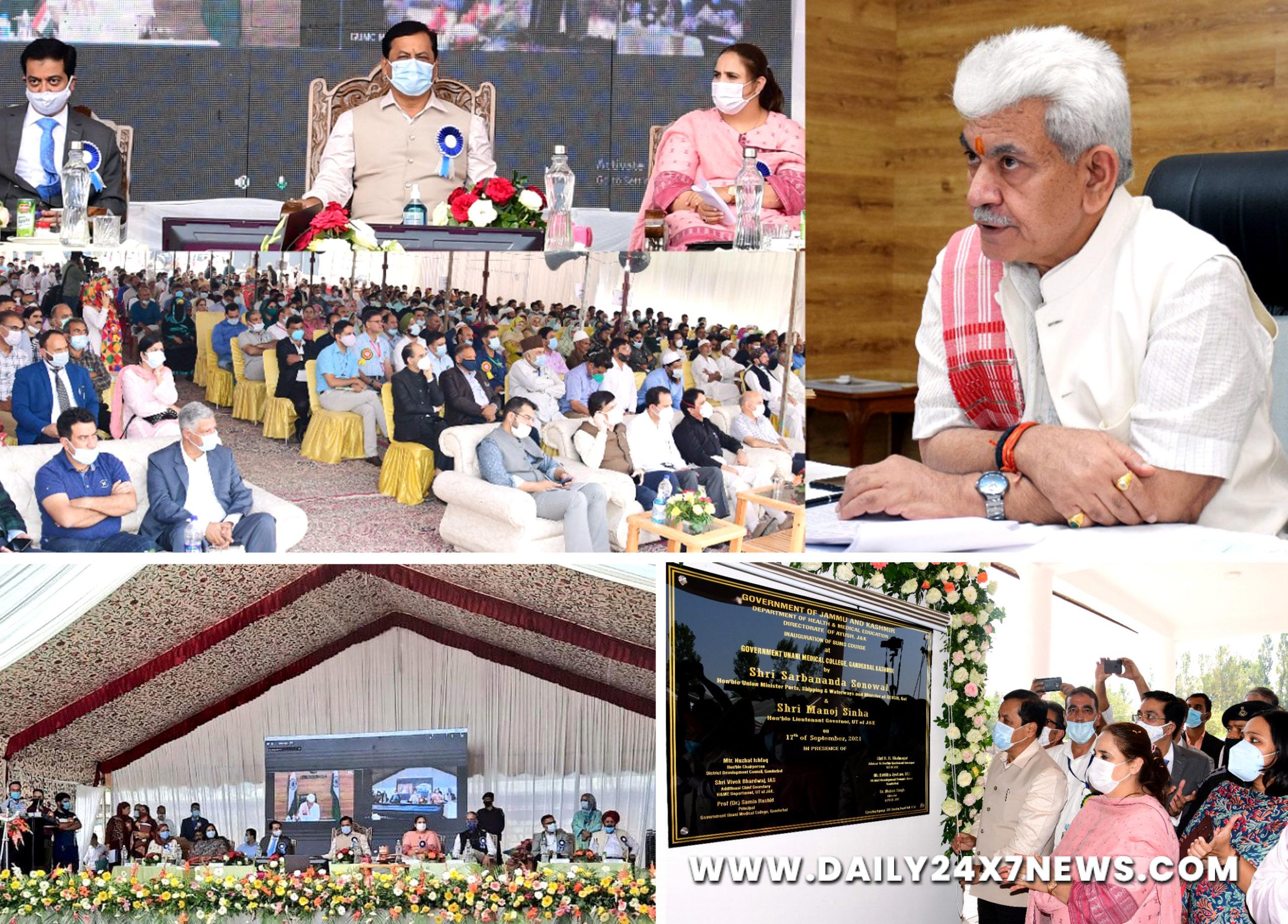 Jammu : Lieutenant Governor Manoj Sinha along with Union Minister of AYUSH, and Ports, Shipping, Waterways, Sarbananda Sonowal today inaugurated the first batch of BUMS at Government Unani Medical College Ganderbal.Congratulating the students and faculty members of the first batch of Bachelor in Unani Medicine and Surgery (BUMS) of Government Unani Medical College through virtual mode, the Lt Governor wished for their bright future.“Out of 60 students, 23 are girls. It is a matter of pride for us and I extend my best wishes to all the young boys and girls in their career. The 60-bed hospital has seven departments – Medicine, Surgery, ENT, Obstetrics and Gynecology, Pediatrics, Dermatology, and Treatment by Non-medicinal lifestyle”, he added.Lauding the efforts of the concerned officers and executing agency for arranging the comprehensive health facility at a very low cost, the Lt Governor said the Ganderbal Unani Medical College and Hospital will provide basic health services to the population of other districts as well.Union AYUSH Minister, Sh Sarbananda Sonowal said that with the starting of the first BUMS course, Government Unani Medical College will help promote indigenous systems of medicine in J&K, and also act as a tertiary care health facility for the UT. He further said that AYUSH Ministry is determined to provide basic healthcare services to the people of Jammu and Kashmir.The Lt Governor said that the first Unani Medical College was started in Jammu and Kashmir in 1962 but due to some reasons, it was closed down in 1967.Terming the Unani Medical College as the first Government Unani College of modern times, the Lt Governor said that like many projects, this college too was conceived 10 years back but only in the last two years has it been completed with a focused work. “This symbolizes our resolve to build a strong infrastructure in healthcare sector”, he added.The college constructed under the central government scheme at an estimated cost of Rs 32.50 crore, received the financial assistance of Rs 17 crore from the Ministry of AYUSH, Government of India.The Lt Governor expressed his heartfelt gratitude to the Hon’ble Prime Minister Shri Narendra Modi for liberal funding for the creation of infrastructure in Jammu and Kashmir.

He said that the Ministry of AYUSH, under the guidance of the Hon’ble PM, has done unprecedented work in indigenous systems of medicine, research and healthcare. He congratulated the Hon’ble Minister of AYUSH for the way the AYUSH has played an important role in the fight against Corona.“I sincerely hope that Unani Medical College Ganderbal will play its important role in promoting indigenous system of medicine in J&K UT, especially in Kashmir Division”, the Lt Governor said.Speaking on the discussion breaking out among the medical experts on how the integration of traditional and modern health systems can be done, and how to increase the immunity of people, their immune system with indigenous medical methods, the Lt Governor said that he himself was monitoring the situation and saw firsthand how all the systems of indigenous medical system viz Ayurveda, Siddha, and Unani worked together with the mission of human service during the period of immense pressure on medical system during the Corona pandemic.The Lt Governor said that because of the vitality of indigenous medical system in preventing and treating many diseases, today these indigenous systems are being included in the form of scientific medicinal system in the country and abroad.The Lt Governor said that efforts are afoot for promoting Ayurveda system in J&K. AYUSH Health and Wellness Centers are being set up at different places across the UT by the Ministry of AYUSH. “There are many areas in the villages where people have more faith in the indigenous medical system and we are constantly trying to provide all its resources to them”, he added.Noting that J&K UT is one of the best performing UTs/States in the country in terms of health facilities, the Lt Governor said that extensive interventions have been made in the health facilities to develop a state-of-the-art health sector in J&K under the directions of Hon’ble Prime Minister. “The speed and scale at which the health sector transformation has taken place in J&K is remarkable and is now visible in achievements”, he added.

Listing out the data of Health Sector the Lt Governor said that according to the National Family Health Survey, the neonatal mortality rate came down to single-digit 9.8 in 2019-20, from 23.1 in 2015-16. Infant Mortality Rate today has come down to half i.e. 16.3 from 32.4 recorded in 2015-16 survey. The under-5 mortality rate was 37.6 in 2015-16, which has come down by half to 18.5 today.The Lt Governor said that for the first time in 2016-17, J&K got two new AIIMS and Seven Medical Colleges between 2016 and 2019. The first batch in AIIMS Jammu has started, and the construction of AIIMS Srinagar will start soon. Between 2015 and 2019, two State Cancer Institutes were given to Jammu and Kashmir. Before 2019, there were only 129 health and wellness centers across Jammu and Kashmir. 1275 new health and wellness centers have been set up in two years, informed the Lt Governor.Observing that there was no health insurance scheme in J&K before 2019, the Lt Governor said that Hon’ble Prime Minister gave a scheme named Ayushman Bharat Sehat to UT in December 2020, in which health insurance of 5 lakh per family is being provided to all citizens without any discrimination. 49 lakh beneficiaries are registered and 45.48 lakh golden cards have been made available.Lauding the hard work of doctors, health workers, and other services, the Lt Governor said we have ensured that during the second wave in Jammu and Kashmir, no one faced any problem of oxygen beds. “In August last year, the oxygen generation capacity in all our hospitals was only 15,000 LPM, which has been increased to 70,000 LPM within 8 months and will be increased to 90,000 LPM by the last week of September. Like Corona management, the UT is also leading in the whole country in vaccination”, he added.Sh Vivek Bhardwaj, Additional Chief Secretary in his address highlighted the importance of Unani System of Medicine, and underscored the increasing relevance of AYUSH due to its efficacy in the changing scenario.Dr Mohan Singh, Director AYUSH read the welcome address while Prof (Dr) Sami Rashid, Principal Government Unani Medical College gave the Vote of Thanks.Those present at the inauguration ceremony included Sh Pramod Kumar Pathak, Special Secretary AYUSH, GoI; Ms Kritika Jyotsana, Deputy Commissioner Ganderbal; Dr Asim Ali Khan, Director General CCRUM; Prof (Dr) Samia Rashid, Pricncipal Govt Unani College Ganderbal.Smt. Nuzhat Ishfaq, DDC Chairperson, Ganderbal, DDC members, BDC members, PRI representatives, prominent citizens, faculty, and students of Govt Unani Medical College were also present on the occasion.