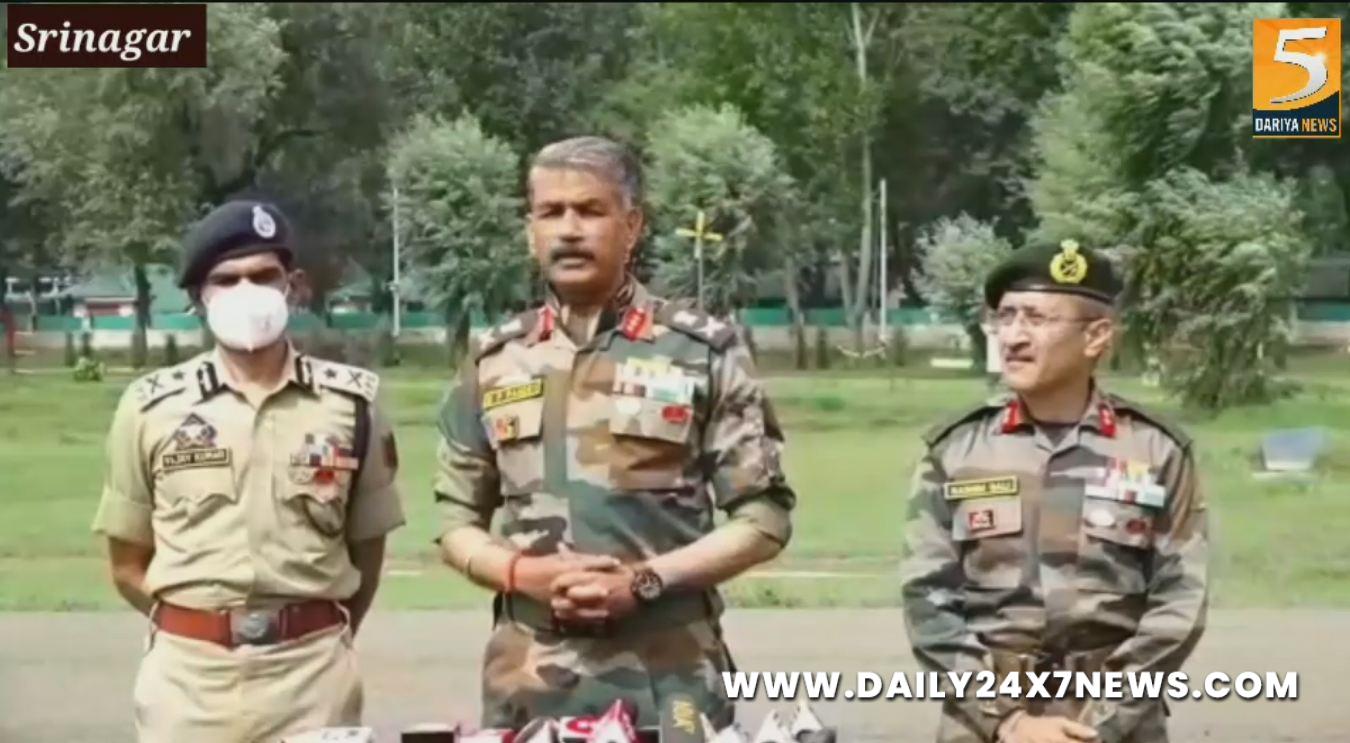 Srinagar : Security forces on Saturday claimed to have achieved a major success by killing Lamboo the Jaish-e-Muhammad’s IED expert and “mastermind” of Lethpora fidayeen attack of 2019 in which 40 CRPF men were killed.Lamboo was killed along with another Jaish militant whose identity is yet to be ascertained. Addressing a joint presser at army’s Srinagar-based 15 Corps headquarter, GoC 15 Corps D P Pandey, IGP Kashmir Vijay Kumar and GoC Victor Force termed the killing of Lamboo as a major success for security forces.“Saifullah alias Adnan alias Lamboo was active for the past few years in south Kashmir. Based on an input generated by the police, boys from Victor Force launched an operation in the dense woods of Dachigam area of Pulwama on July 27. Given the fact that weather was inclement, so all cautions were taken,” GoC 15 Corps told reporters. He said that today morning, contact was established with the militants and in the ensuing encounter, Jaish’s IED expert, who was also a highly trained militant, was killed along with his associate.“He has been responsible for carrying out many attacks, recruiting young boys and brainwashing them. He would also give weapons and training to the new recruits,” GoC 15 Corps said.

Speaking on the occasion, IGP Kashmir Vijay Kumar said that Lamboo alias Adnan alias Saifullah is a relation of Jaish chief Masood Azhar and had infiltrated into this side of Kashmir in 2017. “There were 14 FIRs registered against him and he was the mastermind and main accused in the February 14, 2019 Lethpora fidayeen attack,” the IGP said. “In total, there are 19 accused. Seven have been arrested and with Lamboo seven have been killed. Five are still absconding.” He said that in its chargehseet, NIA had also named Lamboo.The IGP said that Lamboo was involved in the killing of SPO Fayaz Ahmed, his wife and daughter in Tral recently. In his address, GoC of south Kashmir based Victor Force Rashim Bali said Lamboo had been fleeing from the cordons by taking advantage of civilians and in today’s operation too, he tried to take cover of two women. “But boys from the Victor Force in a professional manner zeroed in on him and killed him and his associate in just three minutes without a scratch to any civilian,” he said. He said that from Lamboo, a M-4 carbine, a glock pistol, a chinese pistol and an Ak-47 rifle has been recovered from the slain. “Glock pistol is a semi-automatic pistol and is not being carried by all,” he said.