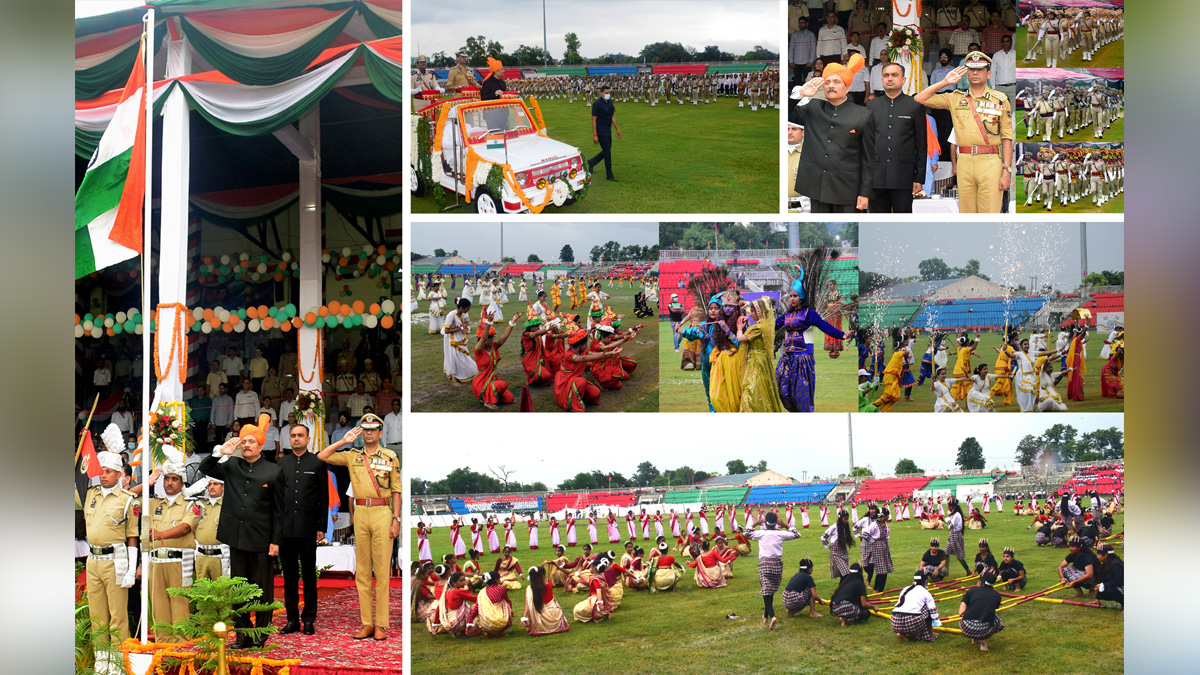 Jammu : The 76th Independence Day was celebrated with patriotism and fervour across Jammu region today with Advisor to Lieutenant Governor, Rajeev Rai Bhatnagar hoisting the tricolour at main function held at M A Stadium here.

The Advisor on the occasion also inspected the parade and took the salute from the contingents of JKP, BSF, CRPF, JKAP, SSB, ITBP, IRP, Women contingent, Forest Protection Force, NCC as well as school children.

While extending his Independence Day greetings to the participants, Advisor Bhatnagar in his address said that ‘Jammu & Kashmir is an integral part multicultural and multi ethnic India. “August 5, 2019 marks a new dawn in the history of J&K and since then, the region has embarked on a journey of impartial and equitable governance”, he said.

The Advisor said that due to the events post-reorganisation of Jammu and Kashmir, over 20 thousand PoJK refugees have been provided democratic rights and are being recognised equal citizens of the nation while being provided opportunities to be a part of India’s march towards progress.

They have also been provided a relief ofworth Rs 5.5 lakh per household, he added.To provide robust healthcare system to the citizens of Jammu & Kashmir’, the Advisor said that during the Covid pandemic, all efforts were made to ensure that there is no shortage of oxygen supply or hospital beds.

He highlighted that all individuals above 18 years of age have been vaccinated. Similarly, 87 percent kids in the 12-14 age group have been provided the first dose and 77 percent of them have also received the second one’, he continued.

‘To strengthen the health sector, 5 hundred projects worth Rs 7000 crore have been taken up. 2 AIIMS, 7 Government Medical Colleges and 15 new Nursing Colleges are being set up in addition to 2 Cancer Institutes and 2 Bone and Joint Hospitals’, he continued.

The Advisor lauded implementation of the PMJAY SEHAT scheme and said that it is the only Union Territory of the country to provide free universal health insurance cover of Rs 5 lakh per family, since its implementation from December 2020.

‘108 Jan Aushadhi Centres have also dedicated towards the welfare of the public since April this year. 80 percent families have been registered under the insurance scheme and 72.57 lakh Golden Cards have been issued under the scheme’, the Advisor remarked.

The twin tube Qazigund-Banihal tunnel has been completed at a cost of Rs 3127 crore under PM Development Fund and has been set open for traffic already.’

‘Works have been sanctioned on4.38 km Marog-Digdol and 3.2 km Digdol-Khooni Nala four-lane twin tube tunnel; 6 km long viaduct between Mompsi-Sherbibi and another viaduct tunnel between Nashri-Ramban section. Once completed, the projects would shorten travel distance between Jammu and Srinagar up to four and half hour.’

‘Works are ongoing at the 6 lane Delhi-Amritsar-Katra expressway at a sanctioned cost of Rs 8681 crore and the project is expected to complete by 2024. The double lane project over Akhnoor-Poonch road is also set to complete by March 2024 at a projected cost of Rs 3109.27 crore.’ ‘Double lane project, at a cost of Rs 4034 crore, over NH-244 spanning Chenani, SudhMahadev, Goha, Khalleni, Kishtwar, Chhatru, KhanabalKhadd is also being completed with deadline of August 2023. The 58 km long 4-lane ring road project would also finish by December this year’, the Advisor continued.

HAR GHAR NAL SE JAL
‘The UT government has already made substantial efforts in successful implementation of the Har Ghar Nal Se Jal scheme of the Union Government. In this regard, we have already provided tap water to 58 percent households of Jammu & Kashmir so far. 23160 schools, 24163 Anganwadis, 3324 health institutions and 1666 gram Panchayat Bhawans have been provided tap water under the mission and all targets are set to be achieved by 2024’, the Advisor remarked.

He highlighted that the Union Government has given nod to Ujh Multipurpose Project while as the ShahpurKandi Dam project is also slated to be complete by March 2023.

POWER
‘Projects worth Rs 12922 crore have been sanctioned to ensure that people of J&K are provided round the clock power supply by 2025. In just two years, the government has revived power projects which would generate additional 3000 MW electric power. Paperwork has completed for generation of additional 3284 MW power at a cost of Rs 29600 crore’, the Advisor said.

AGRICULTURE
Speaking on agriculture sector, the Advisor said, “Rs 1999.12 crores have been transferred to bank accounts of farmers of J&K under PM KISAN and Kisan Credit Cards have been issued to 91 percent of them so far”,He added that J&K stands 3rd in monthly farmer household income and 5th in overall performance in farming sector.

Tourism
Tourism is an indispensable sector of J&K; the Advisor remarked and said that tourist influx to the region has increased manifolds during the past couple of years. ‘More than 1 crore visitors, including 4523 foreigners have come to J&K in this calendar year so far’ he said.

‘37 new tourist places in Jammu and 38 in Kashmir regions have been identified to be developed by the government andto boost border tourism in Jammu region, Beating the Retreat parade ceremony has been started in the RS Pura sector also’, he said.

YOUTH
Addressing the youth, the Advisor said, ‘Polytechnics and Industrial Training Institutes are being set up to make our youth employable. MoU has been signed on establishment of two Centres of Excellence under academic-industrial accord with Tata Technologies.

Two centres of automotive engineering are also being set up at ITI Kathua in collaboration with Ashok Leyland.’‘Mission Youth has been launched for the empowerment of young population of J&K. They are also being provided free coaching under Parvaaz scheme of the mission.

The scheme also involves collaborations with top institutions of the country and establishment of over 5 thousand clubs with membership of over 1 lakh youngsters.

‘Youth are being provided Small Electric Vehicles on subsidised rates under MUMKIN scheme. In the year 2021-22, 4482 youth was provided loans worth Rs 4482 crore and government subsidy of Rs 16 crore. Similarly, more than 2 thousand women entrepreneurs were provided financial support worth Rs 102 crore for setting up their enterprises.’

‘Brilliant students are being provided scholarships worth Rs 1 lakh each under the Hon’ble LG-75 and Super B-75 Scholarship schemes. Free coaching is being provided to aspirants of competitive exams whose annual family income is less than Rs 8 lakh’, Advisor said.

INDUSTRY
‘The Union Government has helped in giving boost to industries in J&K with the New Industrial Policy at a budget of Rs 28400 crore. Project proposals to the tune of Rs 54 thousand crore have been received by the UT government so far. Land has been allotted to projects costing Rs 34 thousand crore already. Single window clearance is being provided through singlewindow.jk.gov.in which provides 150 e-services of over 18 departments at a single point’, the Advisor said.

SCHOOL EDUCATION
‘J&K is among the leaders in implementation of the National Education Policy-2020. The government is also making efforts to strengthen sports sector from the grass root level in the UT.’In the school education sector, the Advisor said that J&K ranks above the national average according to the National Achievement Survey (NAS) and is among the top ten ranking states of India.

PROJECTS
‘The Administrative Council has approved setting up of Inter Model Station at Katra. 271 projects of Smart City have also commenced at an estimated budget of Rs 7216 crore. 35197 works have been completed during the financial year 2021-22 and another 45836 works have been planned to complete during the current financial year at a cost of Rs 22126.93 crore.’‘3444 sites have been identified for development under AmritSarovar out which work has already commenced on 1500 sites and completed on 1287 others’, Advisor Bhatnagar said.

REVENUE
‘Under the Digital India Land Record Modernization Programme of Revenue Department, ‘ApkiZameenApkiNigrani’ digital portal has been launched. Land passbooks are being issued in Hindi, Urdu and English. Total 24 services are being provided under Public Service Guarantee Act for the facilitation of public,’ he said.

JOBS
Speaking on jobs, the Advisor said, ‘The UT government is going to fill 26330 vacant gazetted, non gazetted and class-4 posts on mission mode. Since 2019, the number of jobs shortlisted by recruitment agencies for filling stands at 19982.’

‘The UT administration has adopted ‘zero tolerance stand’ against corruption and all payments are therefore being made digitally. We are taking phenomenal strides in implementation of digital services to ensure that the public is benefiter through the Public Service Guarantee Act.

It is due to such efforts that Jammu & Kashmir has ranked top among all Union Territories in the national e-governance rankings’, the Advisor continued, adding thatreal time citizen feedback is being gathered through 200 online services.

The Advisor in his address also expressed his gratitude towards all security personnel working tirelessly to maintain peace and order in J&K.On the occasion, Colourful cultural performances depicting diverse cultural integrity were also presented by school students and artists of Academy of Art Culture and Languages which received thunderous applause from the audience.

The Advisor on the occasion also distributed prizes among the winners of cultural items, contingents, bands. More so, the divisional level winners of National Anthem singing competition conducted by Department of Information and Public Relations were also felicitated on the occasion.

Hurricane Ian kills at least 80 in US

Nord forays into wearable category with 1st Watch in India