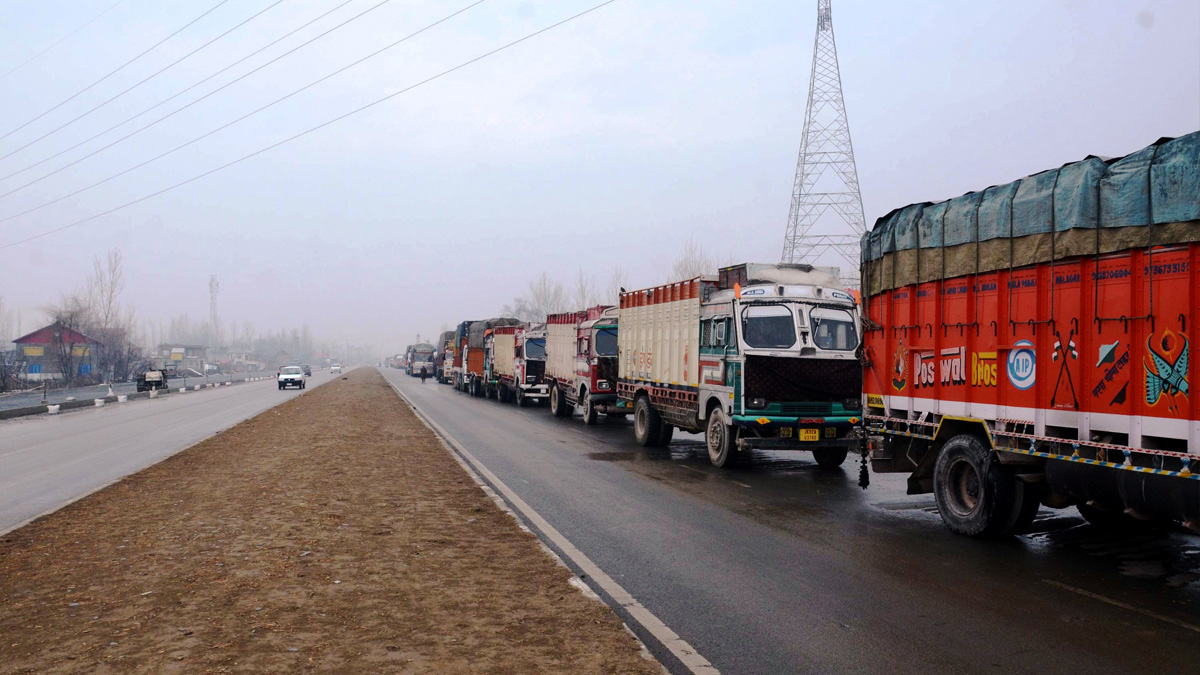 Srinagar : The fresh snowfall coupled with incessant rains across the Valley caused flash floods and landslides at many areas while as two people were feared dead.

Kashmir witnessed heavy overnight spell of rain since Tuesday evening that continued till Wednesday morning triggering a flood like situation in many parts of the region.

The River Jehlum once again roared and touched danger mark at Sangam in Anantang and Ram Munshibag in Srinagar. Roaring Jehlum brought back the gory memories of deadly September 2014 floods in Kashmir.

However, the Irrigation and Flood Control department didn’t declare floods but asked people living around river Jehlum to take extra precautions.However, the occasional sunshine from afternoon put an end to the four-day wet spell in the Valley while the weatherman here has predicted dry weather conditions till next one week.

Moreover, two persons including a local tourist guide are feared dead while a group of 11 tourists was rescued, who were stuck around Tarsar Lake near Sikwas Pahalgam area of South Kashmir’s on Wednesday. At least two dozen nomad families as well as 25 tourists were also rescued in Kulgam and Kokernag areas respectively.

According to the news agency—Kashmir News Observer (KNO), the higher reaches of Kashmir especially Affarwat area of Gulmarg, Tulail, Gurez, hilly areas of Kangan in Ganderbal, Rajouri and Poonch districts located in upper reaches of Pir Panjal mountain ranges and others experienced fresh snowfall, leading to the closure of many roads including Gurez-Bandipora, Mughal road and Srinagar-Jammu highway.

The fresh snowfall in the upper reaches of twin districts Rajouri and Poonch started Tuesday late afternoon and continued till today morning intermittently.

Reports said that almost all the upper reaches in the twin districts are under white blanket of snow following which the district administration Rajouri with the help of SDRF launched a rescue operation to trace the families of Kotranka tehsil, who are on seasonal migration.

Moreover, the incessant rains for more than 15 hours caused flash floods and landslides at multiple places and also resulted in inundation of the roads, lanes and bi-lanes here, causing inconvenience to the commuters as well as pedestrians.

The locals said that the water has entered almost every house in the area where the officials of Irrigation and Flood Control (I&FC) in unison with the men from other departments and locals had started the restoration work. However, no loss of life or injury was reported in the flash floods.

The breach in nallahs were also reported in Sopore and Tangdhar areas of northern districts where the restoration work was started, the officials in I&FC said.In Kulgam, 24 nomadic families were evacuated and have been shifted to safer places after they were stuck near the banks of Vaishow and Sunman nallahs due to flash floods.

“On tip off, Police teams led by SHO Kund, SHO Devsar, SHO Yaripora and IC PP Mirbazar under the close supervision of SSP Kulgam were constituted to rescue the families. With strenuous efforts of the police parties deputed all the 24 families were evacuated and have been shifted to safer places,” police said.

In an another incident after a distress call from the residents of Sanyadi DK Marag, DH Pora during the intervening night of 21/22 June, 2022 was received and promptly; a Police team of Police Station DH Pora led by SHO DH Pora under the supervision of SSP Kulgam was constituted who on tip off reached the spot along with SDRF team where water with full flow was entering the said village after one bank of the Nallah was breached and there were apprehensions of major damage to property and lives of the said area.

With strenuous efforts from *0145 hours to 0400 hours* and by using all available means the water was diverted in the main stream (Booche Nallah) which not only retarded flood water from entering into the said village but safe guarded the property and lives of the said area, police said.

Moreover, two tourists including a local tourist guide are feared dead while a group of 11 tourists have been rescued who were stuck around Tarsar lake near Sikwas Pahalgam area of South Kashmir’s on Wednesday.

An official said that a group of 13 tourists including three local guides were on way to see sight when it got stuck in Tarsar Lake at Sikwas Pahlgam, adding that when tourists along with guides were walking near by this lake, a tourist guide along a tourist drowned into the water while the others got stuck there.

He added that a tourist guide identified as Dr Shakeel Ahmad of Gagangeer Ganderbal and tourist Dr Mahesh from Ganderbal, who drowned in the water, are still missing and efforts are on to trace them.

Tehsildar Pahalgam Hussian Ahmad said that soon after receiving the information about the incident a rescue team was dispatched who have already rescued 11 persons while efforts are on to find the two missing persons.

He added that 11 have reached Aru Pahalgam where they have been given first aid.Nearly half a dozen vehicles carrying 25 tourists were also stuck at Sinthan top road in Kokernag area of Anantnag district were also rescued.

Meanwhile, several roads including Srinagar-Jammu highway, Gurez-Bandipora road and Mughal road have been closed for the traffic after fresh snowfall and landslides triggered by heavy rains.

Jammu-Srinagar highway was closed for traffic movement today after heavy rains triggered landslides, shooting stones, leaving hundreds of vehicles stranded at various places on the route, while the restoration and clearance work is underway, officials said.

Deputy Commissioner, Ramban, Mussarat Islam said that 20 of the 30 landslides in the Ramban-Udhampur section of the highway have so far been cleared by the National Highways Authority of India (NHAI) while the clearance works was in progress near Battery Cheshma on Jammu-Srinagar highway.

Some trucks were caught in mud-slush. Continuous shooting stones over the steel tunnel at Panthyal were affecting road clearance operations amidst rains, the officials said, adding that a JCB machine also got swept into the river when the landslide occurred at Samroli area of Udhampur.Similarly, the Mughal Road connecting Poonch and Shopian districts through Pir Ki Gali has also been closed since Tuesday late evening and will be restored on Thursday morning.

Officials said that a landslide took place at Poshana on late Tuesday evening and the road got closed for traffic after this slide, adding that the road restoration work continued throughout Wednesday and debris has been cleared.“The road will be restored for traffic on Thursday morning and traffic will be allowed to ply if weather remains normal,” they said.

Officials in an advisory said that the movement of all type of vehicles shall remain suspended on Jammu-Srinagar NHW and subject to fair weather and good road condition, the vehicular movement on Srinagar-Sonamarg-Gumari road shall be allowed from both side viz Srinagar towards Kargil and vice-versa. Meanwhile, LG’s Advisor R R Bhatnagar told KNO that government was closely monitoring the situation and that there was no need to panic—(KNO)

Normal to above normal rainfall in July for north, central, south India: IMD