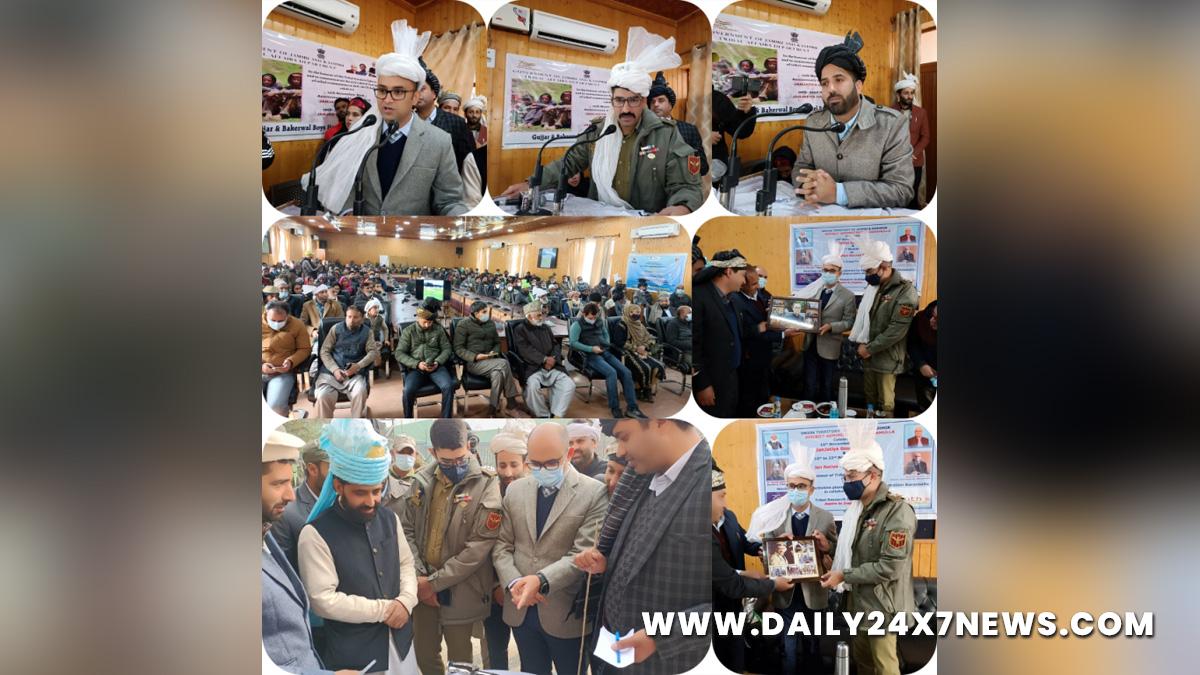 Baramulla : As part of the Tribal Pride Week Celebration being observed across the country, District Administration Baramulla today for the first time observed National Tribal Day to mark the celebrations of rich Cultural Heritage of Tribal Communities and honouring the Tribal Citizens for their excellent performance in various fields.Deputy Commissioner Baramulla, Bhupinder Kumar was the chief guest while SSP Baramulla Rayees Mohammad Bhat was the special guest on the occasion.The Tribal Pride Week Celebration is being observed in district Baramulla from 15-22 November which will mark a week long series of events and Cultural Tribal Festival showcasing the rich cultural heritage of tribes in Jammu and Kashmir.On the occasion, District Information Officer Baramulla Mudasir Choudhary in his inaugural speech presented a welcome note to the chief guest and other dignitaries present there. He also highlighted the importance of the event.Addressing the gathering, the Chief Guest Bhupinder Kumar enumerated the measures taken by the Government for the upliftment of Tribal communities. He said that specific attention is being given by the Government for holistic development and welfare of Tribal people to ensure empowerment of the community at all fronts.

On the occasion, the DC in his address asked the Tribals to come forward for being the active stakeholders under the Tribal Welfare schemes which guarantee employment and overall empowerment of the community.SSP Baramulla Rayees Mohammad Bhat on the occasion also threw light on the importance of the day and highlighted the contribution of various Tribal heroes and appealed the participants to ensure 100 percent literacy among Tribal population besides, to avail benefits of various schemes meant for their welfare.Earlier, during the Programme, mesmerising Cultural programmes were presented by the students of various schools coming from various tribal regions of the district thereby highlighting the Tribal Tradition and Culture.Meanwhile, various stalls of traditional medicines and other traditional equipments were also showcased depicting the old cultural and traditional lifestyle of the G&B tribe.DDC member from Tujjar Sopore Muzaffar Ahmad Dar BDC Chairperson Narwah Mir Iqbal, Joint Director Planning, Mohd Yousuf Rather, ACD, Yawar Ali Khan, Chief Education Officer G.M Lone, besides other eminent persons including G D Tahir, Arif Arfan, Rafiq Balote, Nazir Nawab of tribal community were also present on the occasion.