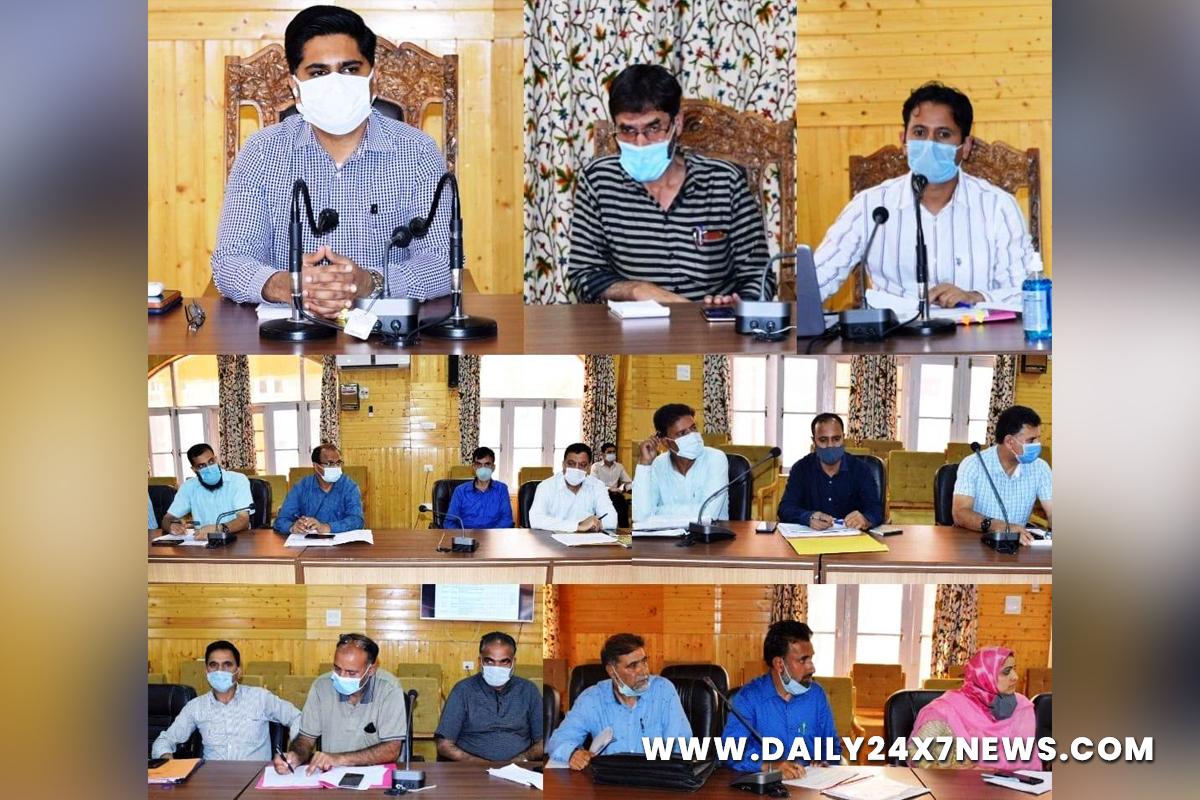 Bandipora : The Deputy Commissioner (DC) Bandipora, Dr Owais Ahmad on Tuesday chaired a meeting of officers to review and get the first-hand account of the developmental activities in vogue in the district.The meeting discussed detailed proposals under the District Capex Plan, 2021-22 including physical status of projects targeted for completion in the current fiscal and took a comprehensive review on the progress of developmental projects undertaken by various departments.It was given out that Rs 529 Crores have been earmarked for the financial year 2021-22 with major thrust on Jal Jeevan Mission (51%), PMGSY (21%), Rural development Department (8%), Education & Health (8%) etc.The DC said 3316 works have been targeted for completion for the financial year 2021-22 which includes 114 Water supply schemes, 24 PMGSY works, 23 Urban Development Works, 13 works of Education, 07 Hospitals, 13 Roads, 09 Irrigation Schemes and 1875 MGNREGA Works.Officers informed that 629 works have been completed so far under different schemes and Rs 16.61 Cr has been spent so far out of the released budget of Rs 70.81 Cr.The DC sought details from the heads of departments including Rural Development department, Health, JKPDCL, R&B, Jal Shakti and other sectors about the approved works, tendering status and status of estimations and progress of ongoing projects/works.At the outset, Joint Director Planning, Imtiyaz Ahmad gave a detailed PowerPoint Presentation about achievements of the District during 2020-21 and Plan highlights of 2021-22.

Terrorist involved in killing of UP carpenter…

He informed the meeting about the major developmental activities completed till date and the future plans. JDP informed that District Hospital Bandipora has been completed and made operational during the current financial year besides four other major work projects including Gujjar and Bakerwal hostel Bandipora at the cost of Rs 3.25 crores, Polytechnic College Bandipora at the cost of Rs 18.00 Crore, Dak Banglow Gurez at the cost of Rs 3.25 Cr and Indoor Stadium Shadipora at the cost of Rs 4.83 Crore.It was revealed that the Wullar Dredging Project is being completed at the cost of Rs 200.00 Crores and the work is in progress at full pace and 60 lakh cubic metres have been dredged so far.ADC Bandipora said among new initiatives, Burnai-Tulail has been provided with a Mobile Network for the First time. He said Rs 2.00 Crores are being spent on 3 towns of Hajin, Bandipora and Sumbal. He said in addition 900 solar street lights have been installed in 123 Villages including Gurez and 03 towns of Bandipora while 1175 Works with 06 school buildings, 06 Roads, 03 Irrigation Schemes etc have been completed during last financial year.It was revealed that last year a record macadamization of 115 Kms was macadamized while this year the administration has set a target to macadamize 173 Kms out of which about 90 kilometers have been macadamized so far.Dr Owais was informed that 10 MVA Receiving Station at Nasoo Bandipora was recently inaugurated that further augmented the power infrastructure in the district. It was announced that a modern ISM Health and Wellness centre with all modern facilities was also established in Aragam.

Speaking on the occasion, the DC said that district administration is committed to ensure all development projects/works are completed within a set timeline. He stressed on the concerned officers/officials to take all possible measures to accelerate the pace of the ongoing works for their time-bound completion and directed for regular monitoring of works. He also directed all the officers to keep a close liaison and coordination with PRIs (DDCs/BDCs/Sarpanchs/Panchs) so that a new system of implementation of developmental activities is ensured in a hassle free manner and people can realize the actual and intended benefits of work.While deliberating on the development plan of the current year, Dr Owais said the government has taken up the water supply issue as a priority area and under Water Security Plan water supply shall be provided to each Household with 51 percent budget being invested in the sector. He said 45000 HHs shall be provided 100% FHTC (functional Tap Connections) under JJM. He said for the first time 30 Filtration Plants and 60 Service reservoirs are being added to the system. “All 114 Schemes of JJM have been put to tenders and the massive & ambitious single year target has been set for 21-22” he added.Dr Owais said 21 percent of the budget is being spent on connectivity of remote areas. He said owing to its topography the district poses challenges in road maintenance and upkeep and the administration is working on two fronts- identifying and projecting new roads, Bye-passes and charging existing schemes to the fullest.The meeting was attended by Additional District Development Commissioner, Ali Afsar Khan; Joint Director Planning Bandipora, Imtiyaz Ahmad; Assistant Commissioner Development, Abdul Rashid Dass; District Information Officer, Jehangeer Akhoon; District officers and other senior officers of the district.