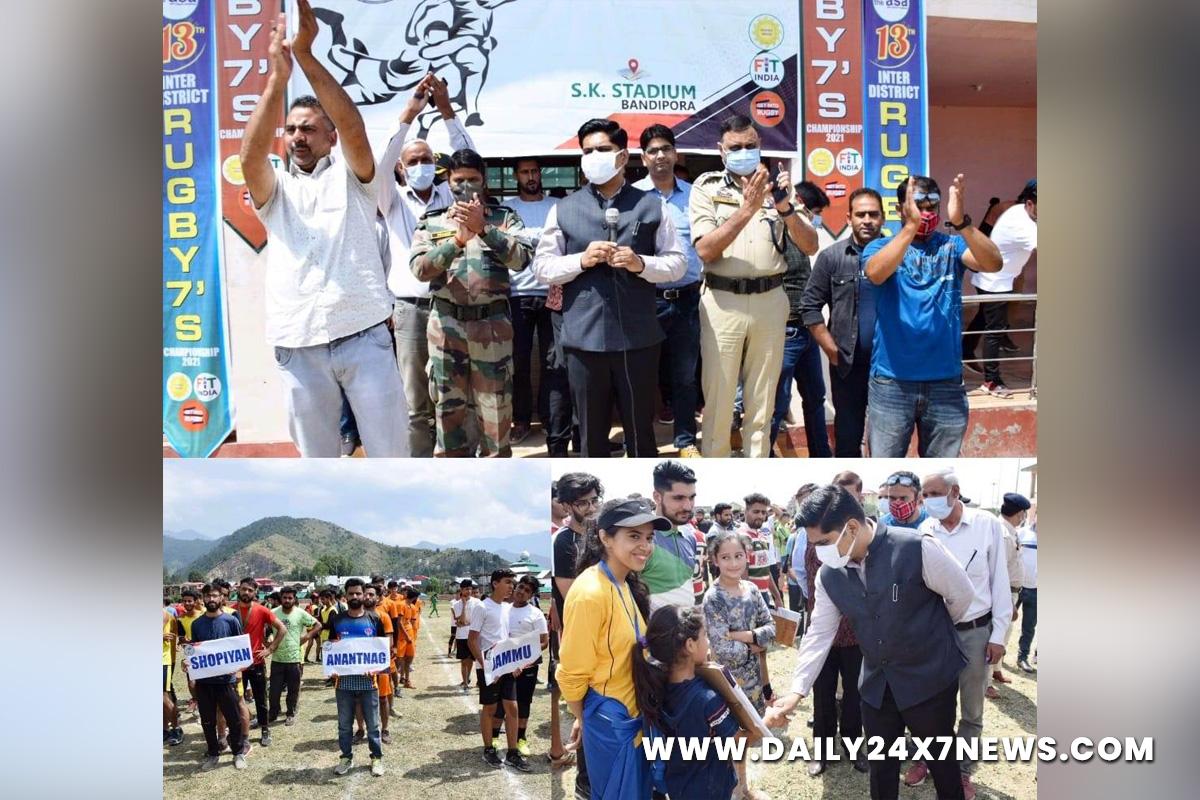 Bandipora : The Deputy Commissioner (DC) Bandipora, Dr Owais Ahmad on Tuesday kick-started the J&K UT Level Rugby 7C’s Championship at SK Stadium here.The championship is being organized by Bandipora Rugby Association under the aegis of J&K Sports Council and Ali Sports Academy Bandipora. About 600 players from about 16 districts of the J&K UT are participating in the tournament that shall conclude on Wednesday.Senior Superintendent of Police Mohammad Zahid, Vice-Chairman JK Rugby Association Gh Nabi Tantray, Manager Ali Sports Academy Faisal Ali, Officers of JK Sports Academy, Civil and military officers were present on the occasion.Speaking on the occasion, the DC said it is a matter of great pleasure that the sports infrastructure has been developed to the level that Bandipora district is able to host the UT level championship. He said more needs to be done with regard to the development of infrastructure and assured every possible support from the district administration.

Dr Owais while interacting with the players, expressed satisfaction about the Youth of Bandipora excelling in sports and said the youth have showcased their talent in several UT, national and even international platforms. He said the youth have potential and talent and there is a need to expose and polish this talent. He said events like these championships help the local talent to expose themselves so that their talent can be polished to make them available for international and national platforms.He lauded the efforts of the local academies for working hard to train local youth in different sports at a very young age thereby channelizing their energies in the right directions. He said it is because of these efforts that the youngsters have shown interest in Rugby sports. He said Bandipora is becoming more familiar because of sports and efforts made by Ali’s sports academy and the same are acknowledged by district and (UT) administration. Dr. Owais Ahmed said Rugby is a unique and popular sport and assured for every support to promote rugby in Bandipora.Dr Owais advised players to adopt a healthy lifestyle and stay away from the menace of drug abuse and asked participants to take active part in sports as it helps in the personality development besides enhancing the decision making capability of the individual.