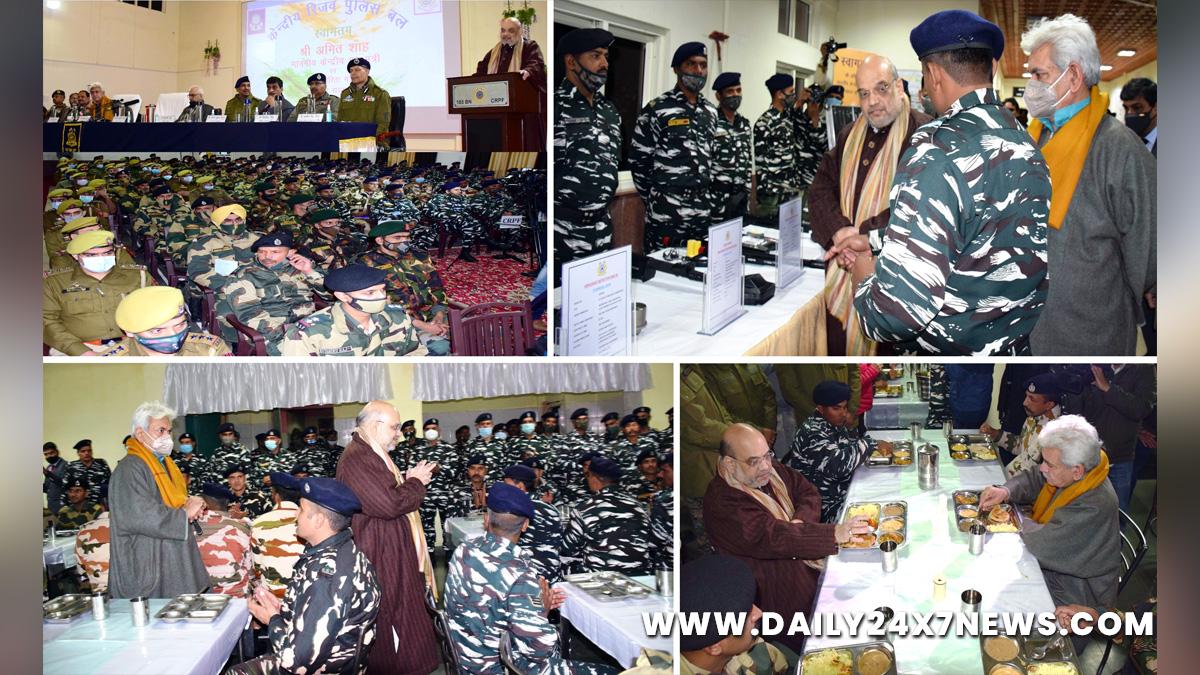 Pulwama : Union Minister of Home Affairs and Minister of Cooperation, Shri Amit Shah today addressed the Sainik Sammelan at CRPF Camp, Lethpora, Pulwama, on the third day of his J&K visit.The Home Minister was accompanied by Lieutenant Governor, Manoj Sinha during his visit to the CRPF Camp.Addressing the Army Jawans, the Union Home Minister said that his visit at the CRPF camp is the most important programme of his three day visit to J&K.I want to spend a night with Jawans in CRPF camp, want to know the experience and hardships and witness the spirit and passion for the nation. You are 24×7 ready for the security of the country even in minus 43 to plus 43 degree temperature. This is the determination that made the people of the country feel secure that they can sleep peacefully, said the Home Minister.When Article 370 and 35A were removed, there was speculation that there would be a huge backlash and a possibility of bloodshed, but because of the promptness of our Security Forces, no one had to fire even a single bullet.Almost all the forces have more than 28 thousand Jawans. Without any bloodshed, a new era of development has begun in Kashmir.The law and order situation in Jammu and Kashmir has improved significantly. From 2014 to 2021, the number of civilian deaths has come down from 208 to 30 and the number of martyred soldiers of security forces has come down from 105 to 60, which shows that this decision has also been accepted by the people of Jammu and Kashmir. There was a time when stone pelting was common in Kashmir, but today such incidents have also reduced a lot, observed the Union Home Minister.

With the kind of development taking place in the country after Shri Narendra Modi became the Prime Minister in 2014, we are confident that in no time India will strengthen its place in one of the top economies of the world.In 2014, we were at 11th place in the world’s economies, today we are at 5th-6th, by 2024 we will definitely reach the third place which will be a big milestone.The country is witnessing economic development, infrastructure, industrial development, radical changes in the country’s education system, huge changes are taking place in the construction sector, all because the Army and CAPF personnel are standing on the front and are capable of crushing all nefarious intentions of the enemies.The Prime Minister has decided to celebrate the ongoing Azadi ka Amrit Mahotsav in a different way to make it a memorable one. When we will be celebrating hundred years of independence, then where will India be, it is also time to set the goals and strengthen our resolve.In the 75th year itself, all the people who are working in different ways for the country, they have to set their resolution and goal. All these goals can be accomplished only when we secure our country from the enemies.Pulwama which the country and the world knew for the ruthless attack on our soldiers, in the same Pulwama, today a medical college worth Rs 2000 crore has started, this is such a big change.

If there is peace, security, if the elected representatives are determined for development, then what transformation can happen, Jammu and Kashmir is an example of this, said the Union Home Minister.Today, development in Jammu and Kashmir is progressing at a fast pace, investment is coming, all national level institutions are coming, Jammu and Kashmir has started to change and transform in every aspect.I am sure that when Modi ji’s dream of development of Jammu and Kashmir is fulfilled, then we will be able to witness peace and harmony here forever.The Central Governemnt under Narendra Modi has zero tolerance policy against terrorism because it is against humanity and those who are involved in this activity are committing heinous acts.Narendra Modi government has done many things for the CAPF jawans. Support has been extended under Bharatveer for the soldiers who laid down their lives while doing duty during Covid.We have just started the Ayushman CAPF card, I request that every jawan should be given two cards, one for himself and one for his family. If there is any health related problem in your family then you can get complete treatment without incurring unlimited health expenses with the Ayushman card.When you are on the border, or any other place like Pulwama, your family should be the concern of the Government of India and with this sensitivity we have implemented this scheme. The credibility that our forces have built due to hard work and the spirit of sacrifice has to be continued, added the Union Home Minister.