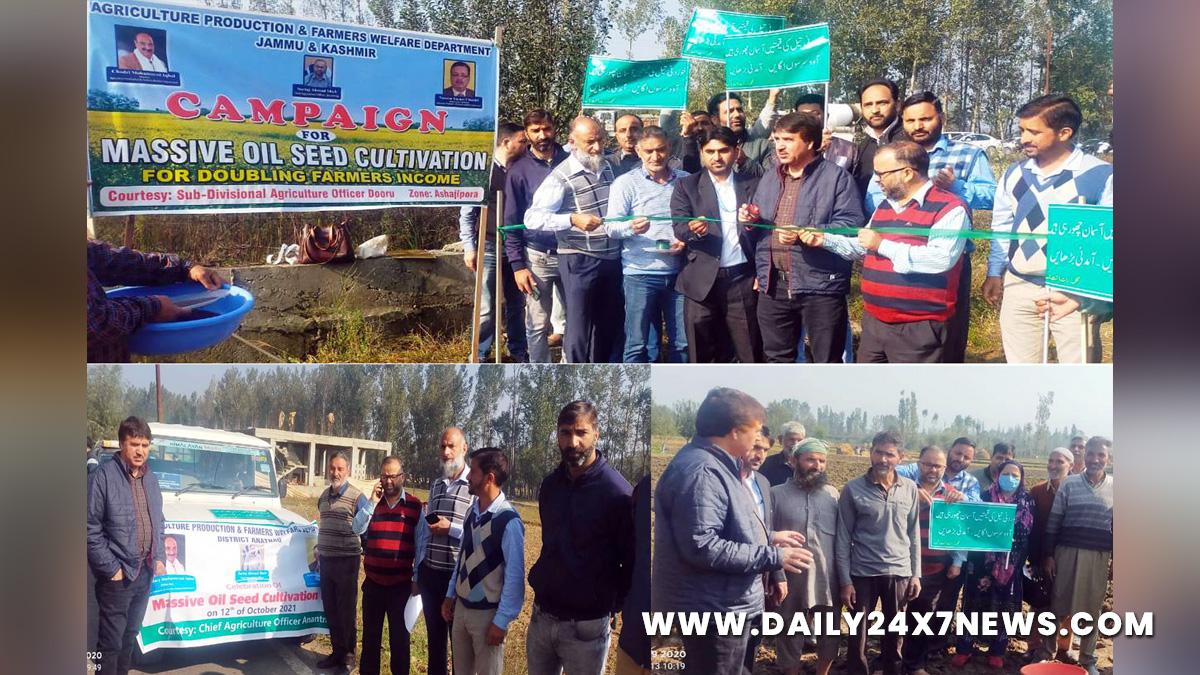 Srinagar : To realize the Prime Minister’s goal of doubling the farmers income by 2022, the Department of Agriculture Kashmir today launched a two day massive campaign under ‘National Mission on Edible Oils’ for doubling the area under Oilseeds (Mustard) during Rabi 2021-22.The campaign was initiated by Director Agriculture Kashmir, Chowdhary Mohammad Iqbal from Srinagar district and a series of events including field visits, participation in Oilseed sowing operations, awareness programs for farmers and interactive sessions with the farmers, bike and car rallies were also organized by the department across the valley.After formally inaugurating the mass campaign, the Director Agriculture said that AP&FWD under the supervision of Principal Secretary AP&FWD, Navin Kumar Choudhary has chalked out an ambitious plan for increasing oilseed production to cut imports of edible oil in the country.He further added that the Government is planning to double the area under the cultivation of oilseeds during the coming Rabi season by way of utilizing paddy land which otherwise remains idle during the winter in cold climatic areas, and sowing mustard in these paddy lands will produce an additional crop.Iqbal emphasized on the importance of oilseed in the agriculture sector.

He said there is a great scope for this crop in the valley as far its productivity is concerned and oil recovery rate is comparatively better than many other parts of the country, and these are the driving forces that the department is taking seriously to increase the area under this crop.He said the agro climatic conditions for the cultivation of mustard are very conducive and we are expecting good returns in days to come.While highlighting the importance of recent technologies for crop improvement programs, the Director said that various conventional methods have been exploited for enhancing the yield of oilseed crops like mustard, however for further improvement there is a need to adopt recent technologies, which will lead to improved sustainability.He asked the officers/officials of the department to work in close coordination with the farming community and ensure that all the recent interventions are being adopted and practiced by the farmers on their field. Similar functions were held in all the districts of Kashmir valley. The different events organized by the Department in the two districts of central Kashmir (Srinagar/Budgam) were supervised by Joint Director Agriculture Inputs Kashmir, Farooq Ahmad Shah.In South Kashmir’s Anantnag/ Kulgam, the proceedings were monitored by Joint Director Agriculture Extension Kashmir, Shahid Iqbal Sheikh while as in Pulwama and Shopian the massive campaign was run under the supervision of Joint Director Agriculture Apiculture and Mushroom Development Kashmir Mohammad Sayed Peer.In North Kashmir’s Baramulla and Kupwara districts massive campaign was lead by Joint Director Agriculture PHM&FM Kashmir, Mohammad Qasim Gani while as in district Bandipora and Ganderbal the massive campaign for doubling the area under oilseeds (Mustard) and the related events were lead by Joint Director Agriculture Farms Kashmir, Dr. Syed Waseem Ahmad Shah.