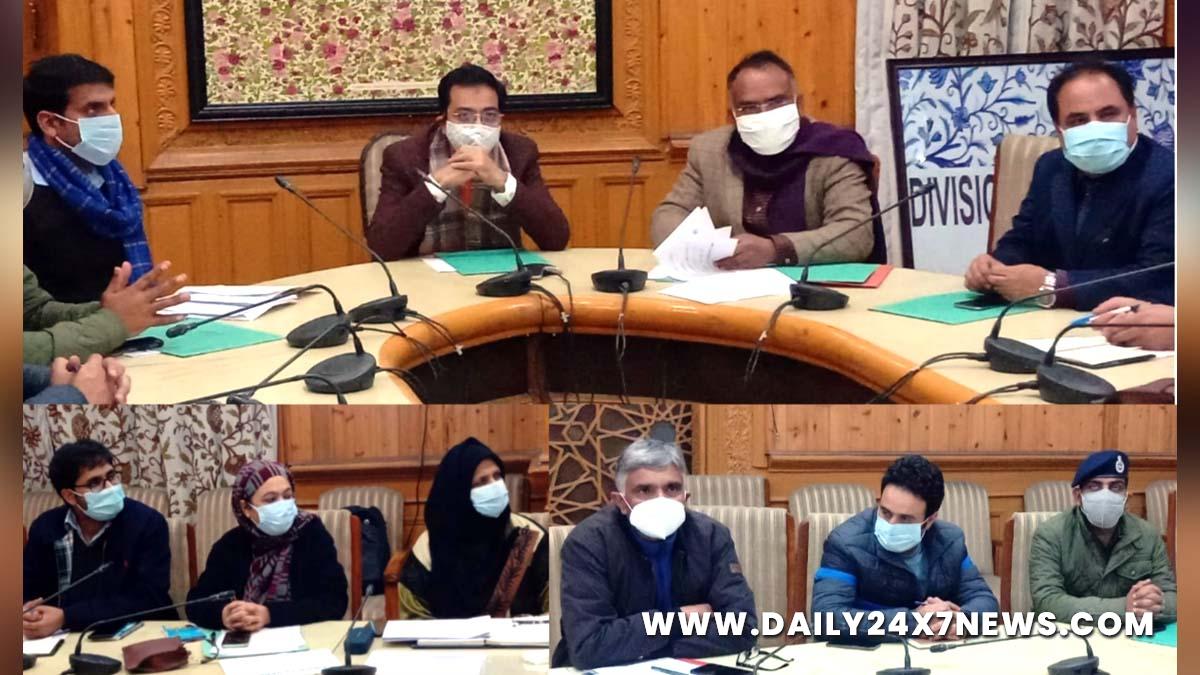 Srinagar : Additional Chief Secretary (ACS), Health and Medical Education, Vivek Bhardwaj today chaired a meeting with officers to review the COVID-19 status in the Kashmir division.The meeting was attended by Divisional Commissioner Kashmir, Pandurang K Pole; Deputy Commissioner Srinagar, Ajaz Asad; Director Health Services Kashmir, Dr Mushtaq Ahmad; Senior Superintendent of Police Srinagar, Sandeep Chaudhary; Chief Medical Officer Srinagar and other concerned.At the outset, the Additional Chief Secretary H&ME was briefed about the status of coronavirus in Kashmir division with regard to daily testing, positivity rate, current active cases among contact tracing and other things.He was informed that the average number of daily tests last week was 22,393 while as the average number of daily positives last week was 105 (Srinagar = 60).Similarly, the positivity rate of the division last week was 0.43 % while during the same period it was 1.96 percent in the Srinagar district. Likewise, the average number of contacts traced per positive case last week was 18 while as in Srinagar it was 20.On the vaccination front, the ACS was informed that the average number of daily vaccine doses administered in Kashmir during last week was 46,589 doses/day and 14,143 doses/day were administered in Srinagar.

The meeting was also told that the second dose vaccination coverage in Kashmir is 63% with the maximum in Srinagar district at 75% and the minimum in Bandipora at 54%.Speaking on the occasion, the Additional Chief Secretary highlighted the importance of contact tracing among populace, besides institutional quarantine for symptomatic COVID-19 positive patients, patients with comorbidities and positive patients with higher group in order to reduce the positivity rate.He asked the concerned officers to chalk out a strategy to trace out the source of the infections among the local population and the reasons behind high positivity rate in Srinagar as compared to other districts of the Kashmir division.Bhardwaj also emphasized on the need to follow a protocol for sharing clinical and epidemiological data with genome testing laboratories on a periodic basis for more detailed study of mutant strain of virus for genome sequencing.Post detailed and elaborated discussion, the ACS reiterated the urgency for a meticulous strategy with respect to stringent enforcement of containment and surveillance measures, proper management of Containment Zones; testing of 100% population in the containment zones.Besides, the meeting also discussed the steps viz aggressive, targeted and timely contact tracing, enhancement in testing in proportion to positivity rate, as well as intensive IEC campaign for awareness of general masses and robust surveillance mechanism for testing, tracing and treating of suspected cases in every district by rapid response teams framed by district administrations.