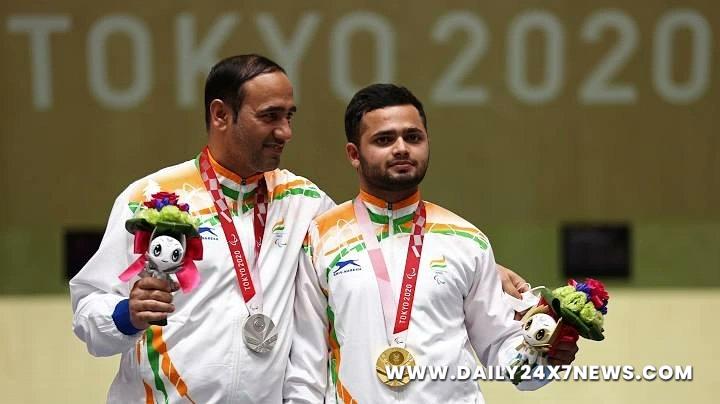 Tokyo : It was double delight for India at the Asaka Shooting Range on Saturday as Manish Narwal and Singhraj won gold and silver respectively as they finished 1-2 in the P4 – Mixed 50m Pistol SH1 at the Tokyo Paralympic Games here.Narwal shot a Paralympic record 218 in the final while Singhraj, who had won a bronze medal in the 10m Air Pistol SH1 earlier this week, finished second with a score of 216.7. Sergey Malyshev of the Russian Paralympic Committee (RPC) took bronze with a score of 196.8.The 19-year-old Narwal had qualified seventh while Singhraj was fourth going into the final but both the Indians shot brilliantly, holding their nerves to surge to the top of the list. Narwal is the world record holder in the final, set at Al Ain, UAE, in March this year.Singhraj, 39, shot into the lead after the first elimination round but Malayshev soon came back to open up a two-point lead as Uzbekistan’s Server Ibragimov, who topped the qualifying, Iran’s Sareh Javanmardi and Serbia’s Zivko Papaz all got eliminated one after another.Though Narwal made a slow start with two poor shots of 7.7, Singhraj was in the zone straight away with a score of 19.4 after two shots.However, by the fifth-sixth shots were fired, the duo was in the reckoning for the podium. Singhraj and Narwal were both in the top three with scores of 46.1 and 45.4 respectively.Narwal was a bit wayward in the next two shots and slipped to the sixth spot while Singhraj held on to the third position after seven shots were fired.Narwal remained calm and composed and shot a couple of 10s to claw back into contention, moving to fifth position with 104.3 points. Singhraj was consistent enough to hold on to the third position.In the second elimination round, Singhraj and Manish were lurking behind each other in fourth and fifth positions with Malyshev leading followed by two Chinese Lou Xiaolong, and Chao Yang in second and third.
However, the tables turned with the Chinese slipping to the fourth and fifth with scores of 7.5 and 8.7 respectively and Indians Narwal and Singhraj taking up third and fourth positions.

Yang got eliminated next and his countryman Xiaolong followed two shots later. This left the podium places to be decided amongst the two Indians and the Russian Malyshev.Malyshev, who till then was sailing smoothly, buckled under pressure and shot 6.9 and 8.5, and Narwal shot a 10 and Singhraj 9.2 to jump to the top two positions, the Russian settling for bronze.”I was very close to gold, but then I started to get nervous. And then – bronze. I was very close to the medal as well, but unfortunately, a little bit was missing,” said the seasoned Russian.In the next two shots, Narwal managed 8.4 and 9.1 while Singhraj made 8.5 and 9.4 respectively but that was not enough for him to overtake Narwal and Singhraj had to be satisfied with the silver, his second medal at Tokyo 202.Earlier, Singhraj shot superbly to surge into the final with a score of 536 and finish fourth while Narwal had a topsy-turvy round as he went up and down the table a few times before finishing seventh with a score of 533 as eight shooters made it to the final. Uzbekistan’s Server Ibragimov, China’s Lou Xiaolong, and Iran’s female shooter Sareh Javanmardi finished with an identical score of 539 but the took the top position as he had shot nine pellets into the inner-10 circle (9x) as compare to eight by the Chinese and five by the Iranian shooter.Russian Paralympic Committee’s (RPC) Sergey Malyshev, who had shot a world record score of 555 in Lima, Peru in June this year, could manage only 532 on Saturday as he booked the eighth and last spot in the final. Serbia’s Zivko Papaz and China’s Yang Chao are the other two shooters in the final.Narwal, who holds the World Record for the final, scored 79 in his fourth series of 10 shots and also had an 88 on his sixth turn. These two low scores pulled him down and he had to be satisfied with the seventh position. Narwal shot a 91 in the first round of 10 shots and followed that up with 93 and another 91 before disaster struck in the fourth series. He responded with a 91 before ending his qualification round with an 88.Singhraj was more consistent as he shot 90 or more in four rounds. He started with 93, 90, and 91 in first three rounds followed by two 86s before winding off with a 90.

‘Govt will sell Jaipur’s Hawa Mahal and Amer Fort too’