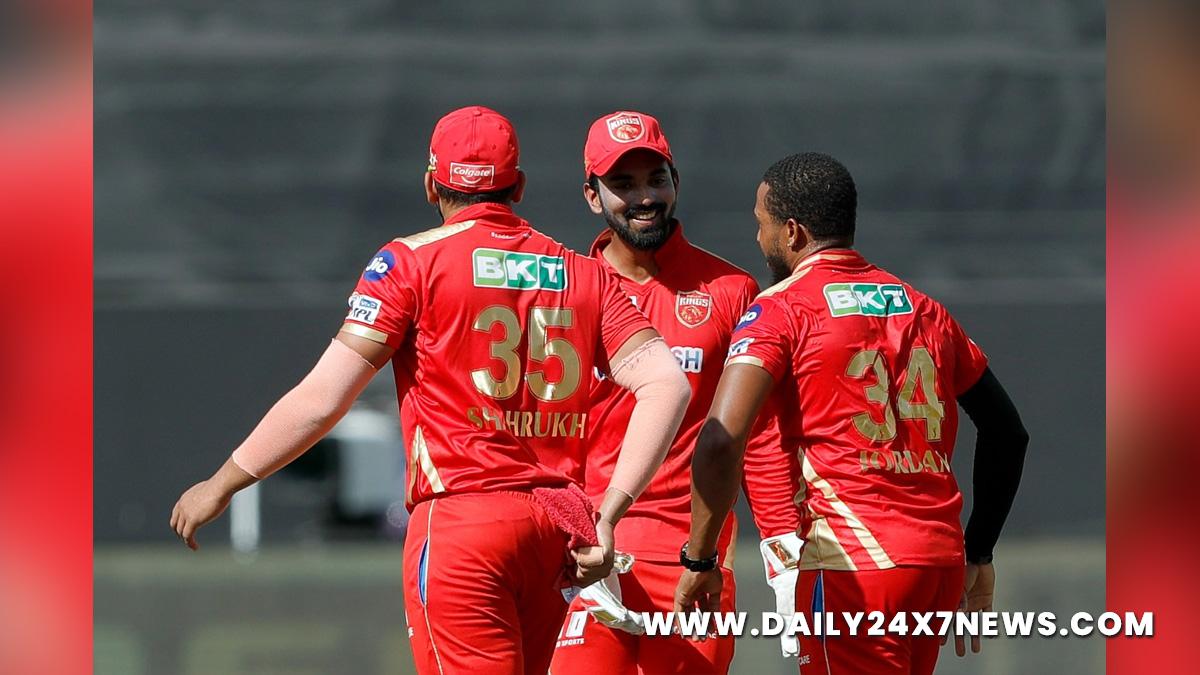 Dubai : Riding on a quickfire fifty by skipper KL Rahul (98 off 42) and a clinical bowling effort, Punjab Kings thrashed Chennai Super Kings by six wickets in the 53rd match of the IPL 2021, at Dubai International Cricket Stadium, here on Thursday.This was Punjab’s sixth win in 14 matches and they still have an outside chance of advancing to the playoffs.A hard-earned fifty by Faf du Plessis (76 off 55) took Chennai Super Kings to 134/6 in 20 overs on a tough pitch. Punjab Kings were excellent with the ball and Arshdeep Singh (2/35) and Chris Jordan (2/20) were the main wicket-takers for them.Chasing 135 for the win, openers Rahul and Mayank Agarwal gave Punjab a flying start, putting on 46 in 4.3 overs.However, Shardul Thakur dismissed Mayank (12) and Sarfaraz Khan (0) in the same over to give Chennai Super Kings two quick breakthroughs.Unfazed by things at the other end, KL Rahul kept on playing aggressive cricket and completed his half-century in 25 balls. Shahrukh Khan, who was promoted up the order, also hit one huge six before getting out to Deepak Chahar.Aiden Markram, who came to bat next, scored 13 of 8 before giving his wicket to Shardul Thakur. In the end, Rahul remained unbeaten on 98 and single-handedly helped Punjab Kings overhaul the target in the 13th over.

Earlier, CSK were off to a poor start as they lost the wickets of Ruturaj Gaikwad (12) and Moeen Ali (0) inside the powerplay.Arshdeep Singh provided Punjab Kings the first breakthrough as he dismissed Gaikwad. The in-form opener tried to take on the short-pitch delivery bowled by Arshdeep but got a top edge and Shahrukh Khan completed the catch. Faf du Plessis was then joined by Moeen Ali, who didn’t trouble scorers and was dismissed for a duck.Du Plessis looked in fine touch and hit back-to-back boundaries. But, he didn’t get the required support from the other end as Robin Uthappa (2), Ambati Rayudu (4) got out cheaply. Both Uthappa and Rayudu were dismissed by Chris Jordan, who is playing this game in place of Nicholas Pooran.MS Dhoni, who came to bat next, hit a few boundaries before getting playing-on to his stumps a googly bowled by Ravi Bishnoi, leaving CSK struggling at 61-5 after 11.6 overs. From there on, Du Plessis and Ravindra Jadeja batted sensibly and rebuilt the CSK innings.The Proteas cricketer took calculated risks and completed his fifth fifty of IPL 2021 in 46 balls and kept Chennai Super Kings alive in the match. Jadeja, on the other hand, gave him the much-needed support by rotating the strike regularly.In the final overs, Du Plessis batted freely and hit a few lusty boundaries to give impetus to CSK innings. His fine innings came to an end for 76 in the last over of the innings and he added 67 runs for the sixth wicket with Jadeja. Dwayne Bravo hit a four in last last few balls and helped CSK post a total of 134-6 in 20 overs, which was not enough in the end.
Brief Scores:
Chennai Super Kings Innings – 134-6 in 20 overs (Faf du Plessis (76 off 55, Chris Jordan 2/20, Arshdeep Singh 2/35) lost to Punjab Kings 139-4 in 13 Overs (KL Rahul 98 off 42; Shardul Thakur 3/28

Google to train over 40 mn people on Cloud skills