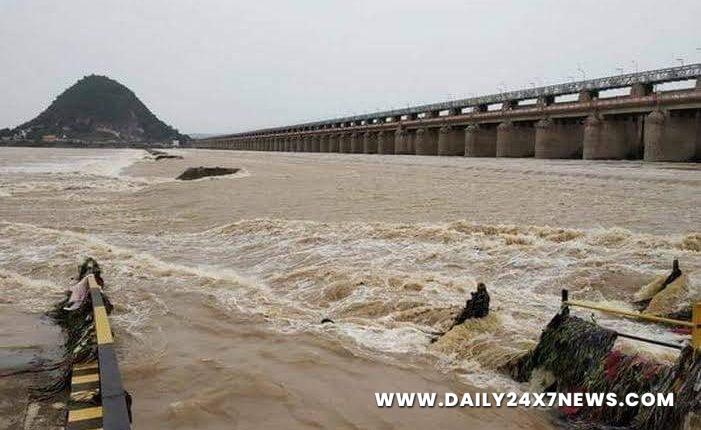 Vijayawada : Even as the Krishna river in Andhra Pradesh’s Vijayawada has been in spate since Sunday afternoon in the wake of a downpour, officials monitoring the situation said on Monday that around 2,000 families living in the catchment area were affected by floodwater.”Of the nearly 2,100 families living there, around 2,000 families have been affected,” said an official.He said the government was making arrangements at the IGM stadium and five municipal schools to house 2,000 displaced persons.Officials have been monitoring the situation since Sunday night and arranging vehicles to shift out people. “However, only 500 persons are willing to move out while many others are not interested to leave their homes,” he said.Many residents were seen wading through chest-deep waters with their belongings.The government has also made food arrangements for the evacuees.
Likewise, medical teams have also been readied to attend to the affected people.”We are holding a medical camp near the flood-affected place. We have advised people to wear masks due to coronavirus pandemic. We have made public announcements to this effect,” said another official.Relief efforts would be intensified once the floodwater recedes. Floodwater began to rise around 2 pm on Sunday and was expected to go up further.Meanwhile, Andhra Pradesh government’s adviser Sajjala Ramakrishna Reddy took a jibe at former Chief Minister and Telugu Desam Party (TDP) supremo Nara Chandrababu Naidu over the flood issue.”Dear Chandrababu, there is flood in the Krishna river. At least now you should vacate the illegal house you built at Undavalli. You may block the government with protection from the courts but the floods may not spare your home from submergence,” Reddy said.Following a downpour, the Krishna river is swollen at the Prakasam barrage in Vijayawada, compelling authorities to open all sluice gates to release the excess water.

Cong doing drama on the name of farmers : Prakash Javadekar