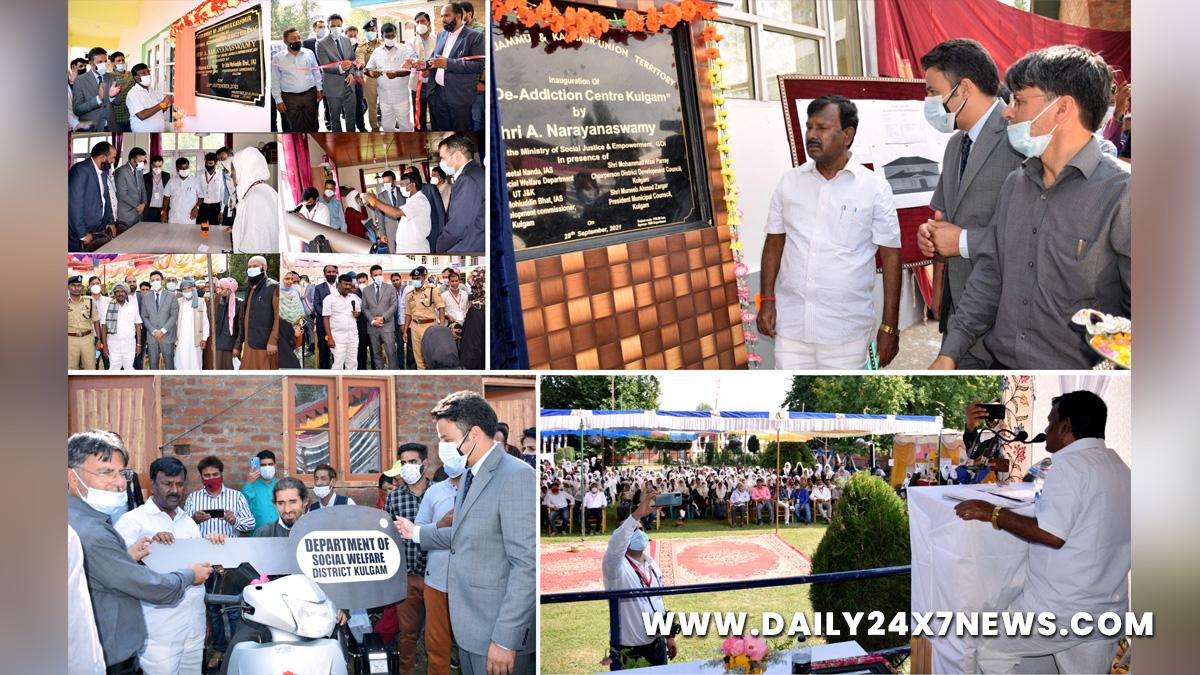 Kulgam : Union Minister of State for Social Justice and Empowerment, A. Narayanaswamy today visited District Kulgam as part of the ongoing public outreach programme of the Union Government.During his visit the Minister took part in a series of events and activities that witnessed participation of public officials, and delegations from tribes.He also inaugurated developmental projects and interacted with multiple public delegations, members of Panchayat Raj Institutions, SHG members and tribal delegations.The Minister during his visit to Government Girls Higher Secondary Kulgam inaugurated an additional block at the school which has come up at an estimated cost of Rs 61.58 lakh. Atul Innovation Lab was also inaugurated by the Minister at the same school. The School children also presented colorful cultural programmes and patriotic songs during a cultural event.Stalls were also installed by these students showcasing their achievements, innovations and cultural ethos which were inspected by the Minister. He also inspected various sections of the school which include herbal garden and fish pond raised inside the school premises. A deodar sapling was also planted in premises of school by the Minister.Present on the occasion were DDC Chairperson, Mohammad Afzal Parrey, Deputy Commissioner, Dr. Bilal Mohi-Ud-Din- Bhat, Director General Social Welfare, Bashir Ahmad Dar, SSP GV Sandeep, BDC Aabid Hussain Khan and other officers.At Mini-stadium Kulgam, the Minister inaugurated inter- zone district level competition for girls in cricket, volleyball, Kabaddi and Kho-kho.

The Minister also interacted with the players and while speaking on the occasion, highlighted the measures and initiatives taken by the Government headed by Prime Minister to promote sports culture across the country.He added that the youth of the country are participating in sports proactively and recently clinched medals in Olympic and Para Olympics besides proving their mettle in other fields as well.He also complimented the local players who have made their place at national and international levels sports categories.Later on, the Minister inaugurated drug de-addiction Centre which has come up at an estimated cost of Rs 1.44 crore. He also presided over Nasha Mukt Bharat programme which was organized by District Administration in collaboration with Social Welfare Department.During a distribution function, the Minister distributed motorized tricycles, wheel chairs, hearing aids and sanction letters among the beneficiaries.The Minister asked the concerned to play a role in public awareness regarding various beneficiary and social welfare schemes meant for downtrodden sections of society so that benefits of the same can percolate to ground level.He also said that the government has introduced loan and self- employment generation schemes to enable youth to benefit from them and set up their own units to earn a livelihood.
Earlier the Minister interacted with members of Self Help Groups of NRLM who shared their successes stories with the Minister. The Minister stressed upon these members to register as Women Cooperative Societies.On the occasion farm machinery was also distributed among beneficiaries.During his extensive tour of the district, the Minister also visited a vaccination centre and took stock of vaccination process.On the occasion the Deputy Commissioner informed the Minister that the district is close to achieving 100 percent vaccination target for all eligible populations which was appreciated by the Minister.Later on, the Minister held an interactive meeting with DDC, BDC and members other PRIs, Presidents of Municipal Committees and other ULB members/councillors.Chairperson District Development Council, District Development Commissioner, Senior Superintendent of Police and other district and sectoral officers also attended the session.These members brought forth various demands concerning the development and public welfare in the whole district as well as in their respective areas.Earlier the Minister also met also several public delegations including members of tribal community.The Minister listened to all the delegations patiently and assured to address their genuine issues and demands in a time bound manner.