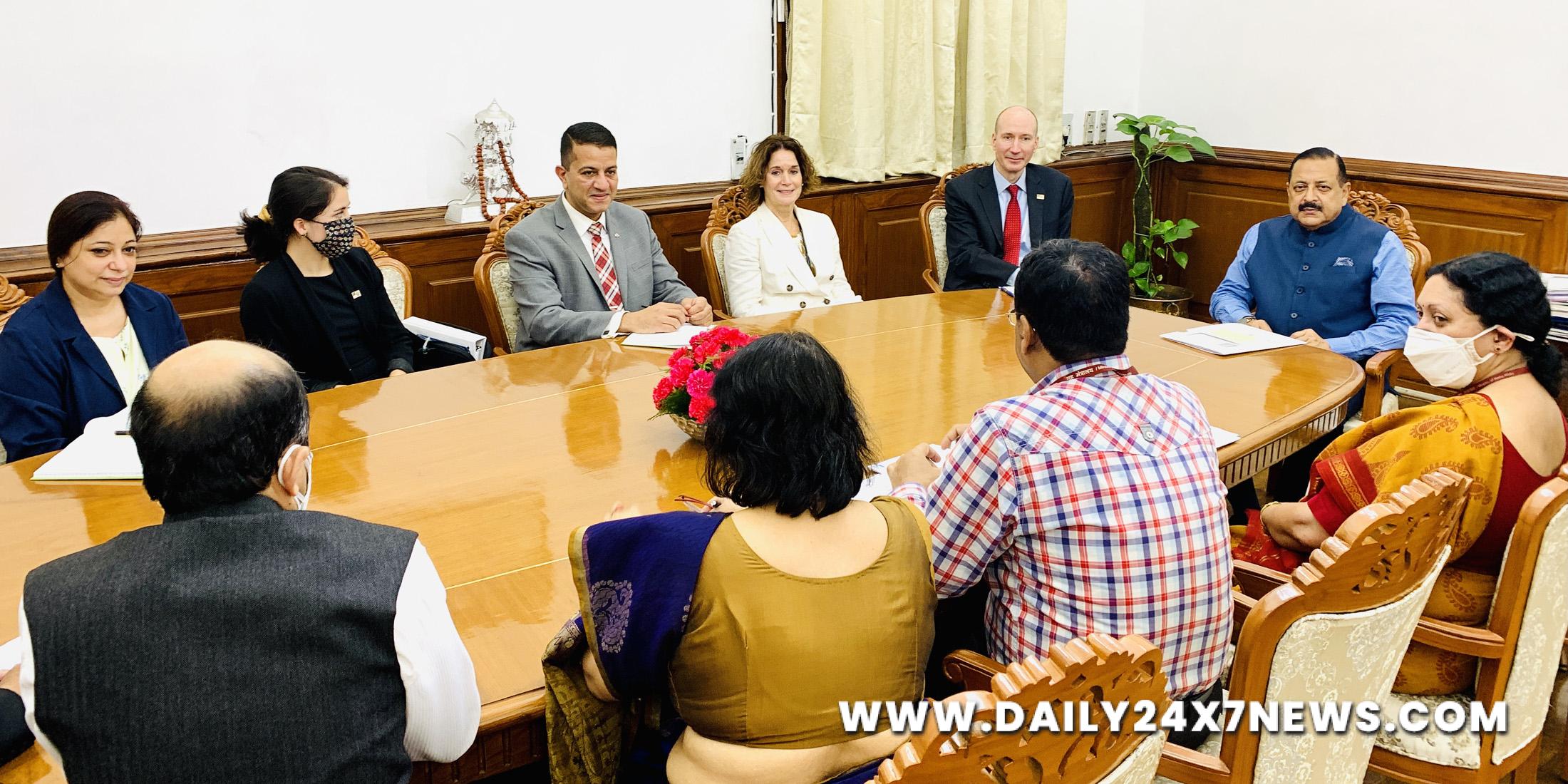 New Delhi : Union Minister of State (Independent Charge) Science & Technology; Minister of State (Independent Charge) Earth Sciences; MoS PMO, Personnel, Public Grievances, Pensions, Atomic Energy and Space, Dr Jitendra Singh today called for greater Indo-US cooperation in the field of clean and green energy, and reiterated India’s commitment to promote our Atomic/Nuclear programme for providing not only a major source of clean energy but also as a major tool of application in areas like healthcare and agriculture sector.At a meeting with a high level US Delegation, led by Deputy Secretary of Energy, David M. Turk, who called on Dr Jitendra Singh here, the Minister said that India and the United States are revamping their strategic partnership to focus on clean energy sectors, such as biofuels and hydrogen.Dr Jitendra Singh informed the delegation that in the next ten years, India will produce more than three times nuclear power and it is expected to reach 22,480 MW by the year 2031, from the current 6780 MW as more nuclear power plants are also planned in future. Referring to Prime Minister Narendra Modi’s out of box idea for joint ventures in Nuclear Energy sector, the Minister pointed out that Gamma irradiation technology for food preservation has already been shared with private players and presently 26 Gamma Radiation Processing Plants are operational in the country in private, semi government and government sector for irradiation of various products.

The Minister also underlined the proposal for establishing a Research Reactor in PPP mode for production of medical isotopes to promote welfare of humanity through affordable treatment for cancer and other diseases. US Deputy Secretary of Energy, David M. Turk assured Dr Jitendra Singh that America will deepen its collaboration with India in Nuclear Energy as there is a lot of complementarity there. Mr Turk also promised deeper engagement with India in the Green Hydrogen sector as recently announced by Prime Minister Modi in his Independence Day Speech. The visiting Energy Minister said that it is also imperative for Climate Change and mitigation related issues. The two countries have also signed up for the transformation of the US-India gas task force. This will entail emphasis on the intersectionality between bioenergy, hydrogen, and renewable fuels with natural gas. Dr Jitendra Singh said, with the rapid introduction of biofuels, renewable energy and green Hydrogen, India is well poised to play an important role towards Carbon neutrality. He informed that the Government is already encouraging adaptation of Hydrogen fuels and technology for the mobility sector and many industries like Steel, Cement, and Glass Manufacturing Industries have already started using Hydrogen for heating requirements. Referring to all-encompassing cooperation in Science and Technology and academia exchange programmes, Dr Jitendra Singh said that India has proposed to launch a Mission “Integrated Bio refineries” where the US is actively supporting the initiative.

A few areas of potential R&D for collaboration in Advanced Biofuels and Renewable Chemicals and Materials have been identified. He said, under Mission Innovation phase 1.0, India has been actively co-leading the Sustainable Biofuel Innovation challenge and supporting the RD&D collaborative projects (via Funding opportunity announcement) in close coordination with other IC4 member countries, including the USA.On COVID-19 Front, United States–India Science & Technology Endowment Fund awarded 11 bilateral teams under the category of COVID- 19 Ignition Grants. They are working on solutions that include novel early diagnostic tests, antiviral therapy, drug repurposing, ventilator research, disinfection machines, and sensor-based symptom tracking.Dwelling on Bi-lateral Artificial Intelligence Initiative, Dr Jitendra Singh said, Curtain Raiser of IUSSTF’s U.S. India Artificial Intelligence Initiative (USI-AI) was held on 17th March, 2021. Objective of this initiative is to provide a unique opportunity to both the countries to strengthen their strategic partnership by focusing on AI cooperation in critical areas at the interface of Science, Technology, and Society. The Minister said that in the last 7 years, the World has seen how Prime Minister Modi has championed the cause of Green Technology to fight the challenges of Climate Crisis. He said, even in his Independence Day address, Modi underlined that Science and Technology will play a lead role in next 25 years, when India turns 100. He said, the ultimate aim of all technological innovations is to bring “Ease of Living” for the common man.