Challenge, whether Channi and Sidhu take action against corrupt ministers or prove themselves as new 'Ali Baba' like Captain 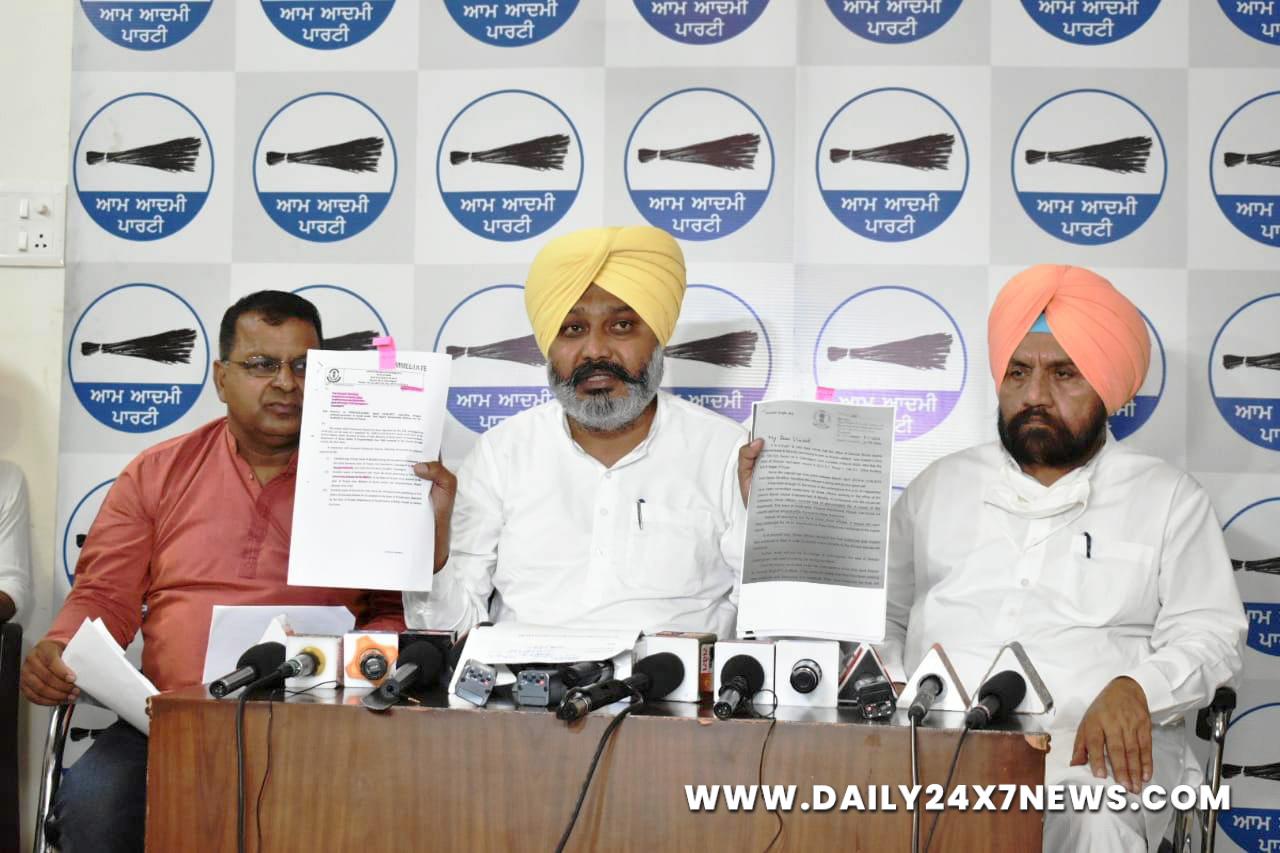 Chandigarh : The Aam Aadmi Party (AAP) Punjab senior leader and Leader of Opposition (LoP) Harpal Singh Cheema challenged the newly appointed Punjab Chief Minister Charanjit Singh Channi, demanding registration of cases against five most tainted ministers of Captain’s cabinet and to put them behind bars along with recovery of billions of rupees looted from the state.Addressing a press conference with party’s state general secretary Harchand Singh Barsat and spokesperson Neel Garg at the party headquarters here on Wednesday, Harpal Singh Cheema said, “Although Capt Amarinder Singh along with his entire cabinet and most of the Congress MLAs looted Punjab and the people to their heart’s content like the Badals, but the facts against Cabinet Ministers Sadhu Singh Dharamsot, Balbir Singh Sidhu, Rana Gurmit Singh Sodhi, Bharat Bhushan Ashu and Sunder Sham Arora have become public.”He said the Aam Aadmi Party has not only been seeking dismissal and action from the Punjab Government and the Governor of Punjab against these ministers but has also been besieging the residences of these corrupt ministers along with former Chief Minister Capt Amarinder Singh; but Captain kept defending them for his chair. “Therefore, it is a test for the new Chief Minister Charanjit Singh Channi and Congress president Navjot Singh Sidhu to decide whether to get FIRs registered against these corrupt people and put them in jails in the interest of Punjab and the people or by forgiving the ministers again; prove themselves as new ‘Ali Baba’ like Captain Amarinder,” said Cheema.

Presenting government documents and various investigation reports as evidence, Harpal Singh Cheema said Cabinet Minister Sadhu Singh Dharamsot had violated the right of lakhs of poor students to get education by embezzling about Rs 8 crore in post-matric scholarships. He said while senior Punjab government official Kirpa Shankar Saroj had lodged an investigation report against minister Dharamsot, the Union government and the CBI had also sought files from the Captain government for action against the minister. Not only this, another senior officer Davinder Singh had lodged a complaint with the Chandigarh police asking them to register a case against Sadhu Singh Dharamsot. Cheema demanded that strict action should be taken against the officials including minister Sadhu Singh Dharamsot who had given him clean chit and the amount of scam should be recovered.Accusing Food and Civil Supplies Minister Bharat Bhushan Ashu of being associated with land mafia and mandi mafia, Cheema said that a scam of Rs 10,000 crore to import paddy and wheat from other states and sell it in Punjab mandis has taken place under the patronage of the minister. Similarly, Bharat Bhushan Ashu is involved in the multi-crore CLU land scam in Ludhiana.Similarly, Health Minister Balbir Singh Sidhu had embezzled crores of rupees by procuring Fateh kits for treatment of Covid and de-addiction pills and had illegally occupied the Panchayat land of village Balongi worth crores of rupees in the name of Gaushala. Cheema said that Industries Minister Sunder Sham Arora had sold 31 acres of JCT land in Mohali to a private company and committed a scam of Rs 1,500 crore and Cabinet Minister Rana Gurmit Singh Sodhi had embezzled crores of rupees from the exchequer by taking compensation for his land twice.Harpal Singh Cheema said that the Punjab government and the media has evidence of corruption against the said ministers; but other Congress ministers and MLAs have also been linked to corruption and land-sand mafia, which will be revealed in the coming days.