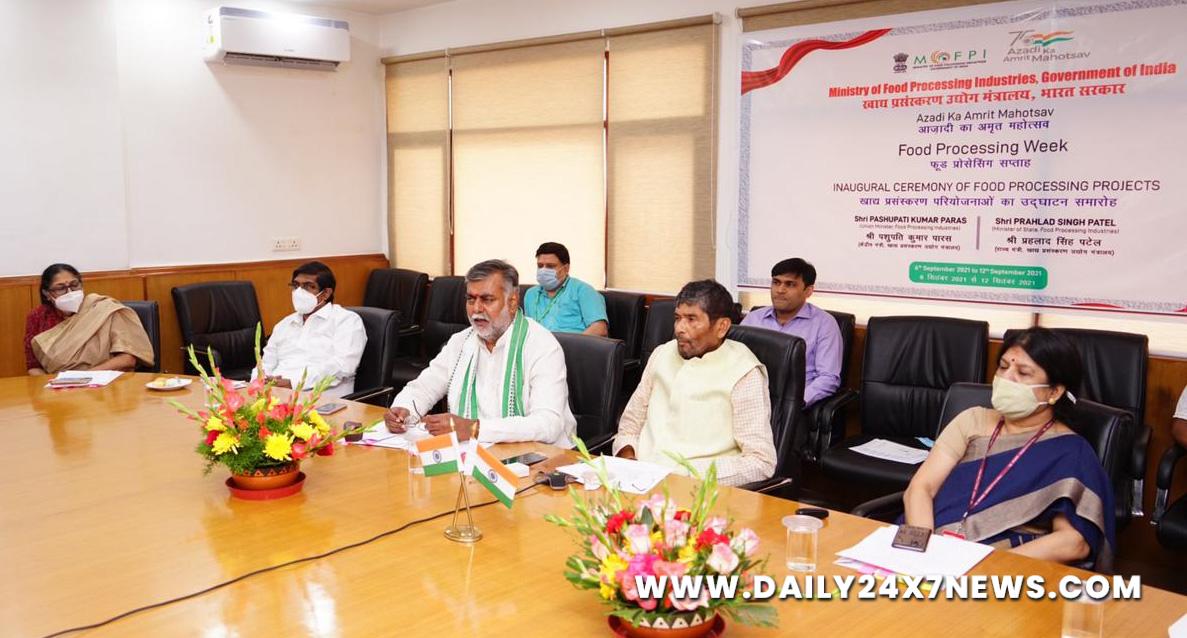 New Delhi : The Union Minister for Food Processing Industries, Shri Pashupati Kumar Paras and the Minister of State for Food Processing Industries, Shri Prahlad Singh Patel, inaugurated 7 food processing projects at Uttar Pradesh, Andhra Pradesh and Tamil Nadu, through video conferencing here today as part of the ‘Azadi Ka Amrit Mahotsav’ celebrations.The total cost of these 7 projects is about Rs.164.46 crores and a grant in aid of Rs. 27.99 crores has been approved by the Ministry. Along with this, 3,100 people will get direct and indirect employment, and 16,500 farmers and entrepreneurs will be benefited from these projects.Speaking on the occasion, Shri Pashupati Kumar Paras said that I would like to convey my appreciation to the promoters of these projects for developing state-of-the-art processing facilities which will prove a milestone in the growth of food processing sector, benefit farmers, growers, processors and consumers of respective regions and adjoining areas immensely.

Addressing the ceremony, Shri Prahlad Singh Patel said that if the surplus crops/products are processed locally, that would be ideal, and everyone would benefit from it. While talking to the promoters, he added that we all have to work together for establishing presence of our brands at international level so as to ensure recognition to our processed products.To commemorate 75 years of India’s Independence, the Government of India is celebrating the ‘Azadi Ka Amrit Mahotsav.’ As a part of the celebration, the Ministry of Food Processing Industries is celebrating Food Processing Week from 6 September 2021 to 12 September 2021, under which the Ministry is organizing various programmes.Meanwhile, aWorkshop on Honey Processing under ‘One District One Product’ was organized by the Ministry of Food Processing Industries at Bhatinda, Punjab today. Rs. 22.02 lakh to Districts Project Management Unit (DPMU) of SRLM for 74 SHG members and Rs.2.01 Cr. to 213 Community Based Organisations for 1,250 SHG members was transferred today as Seed Capital in Meghalaya and Assam respectively, under the PMFME Scheme.As part of the ‘Food Processing Week’ campaign, the success story of the beneficiary of the PMFME scheme, Mrs. Sudha Mahipal of Annapoorna Foods India, was also published on the Ministry’s website in the ‘Atmanirbhar Enterprises’ series.