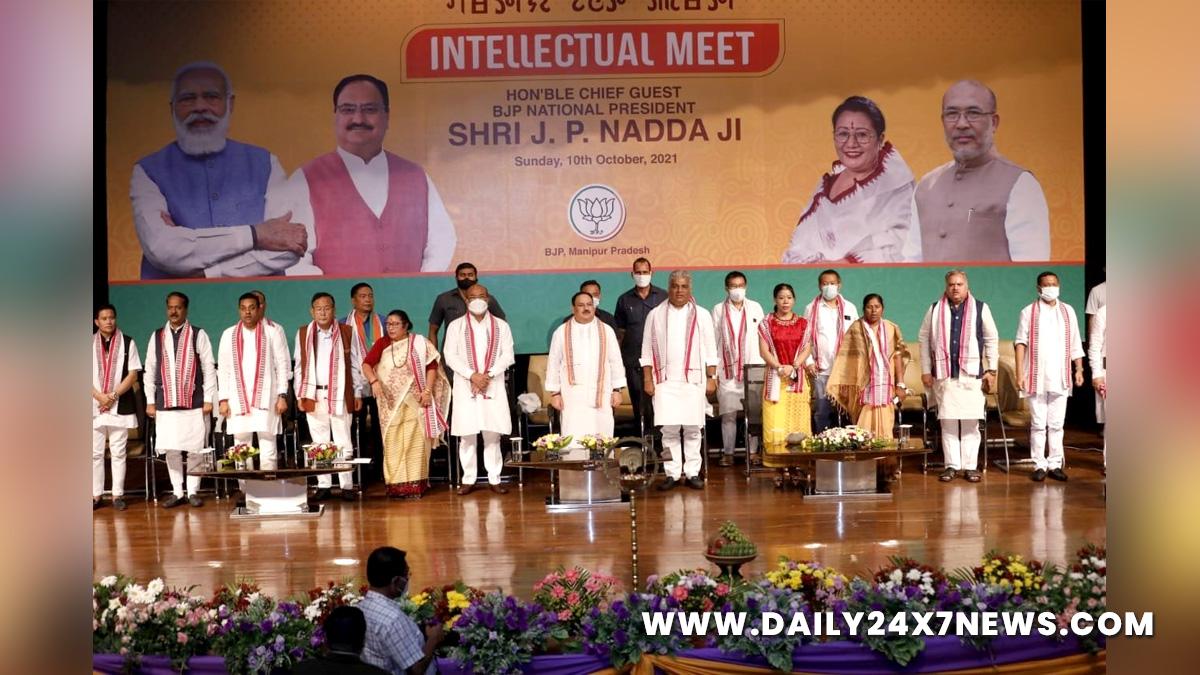 Imphal : BJP president JP Nadda on Sunday said the people of Manipur have suffered a lot due to the insurgency and blockade but now the state along with other northeastern states have turned into a gateway of India’s development.Nadda said that the era of destruction has ended, and with the installation of the BJP government (in 2017) a new phase of growth began.The Bharatiya Janata Party (BJP) president, who came to the poll-bound state of Manipur on Saturday on a two-day visit, while attending a series of events and public rallies, said that development is taking place both in the plains as well as the mountainous areas.”The work is in progress to connect Manipur capital Imphal by railway networks. Work is also going on to develop 16 National Highways in the state at a cost of Rs 4,000 crore while foundation stones were laid for more than 300 projects,” Nadda said.He said that Manipur was considered as the gateway of fighting for the Independence.”Peace and harmony is there, fundamental rights are being protected and economic activity is now growing. Northeast as a whole is now in the mainstream of India’s development. Earlier the northeastern region including Manipur was considered as a tourist destination. But now the region is the hub of development and a tourist destination as well,” he said.

Nadda on Sunday virtually inaugurated the party offices for Thoubal and Bishnupur districts and renamed the offices as ‘Thambal Shanglen’ (Lotus House).”Unlike government offices, the party offices should remain open for all the time as the party offices are the place for serving the people and make all the party functionaries as service providers of the people,” the BJP leader said.”These party offices would encourage and support all the party workers to further strengthen the party organisation in Manipur,” Nadda said.He was accompanied by a host of senior central and state party leaders including Manipur Chief Minister N.Biren Singh, union minister Bhupender Yadav , national spokesperson Sambit Patra, Manipur BJP president A. Sharda Devi and ace boxer M.C. Mary Kom.He also met Manipur Governor La. Ganeshan at Raj Bhavan, met Maharaja Leishamba Sanajaoba at his residence in Imphal, visited Shree Govindajee Temple in Imphal and interacted with the achievers and prominent celebrities of the state in different fields.

This is the golden period of agriculture happening in India under PM Narendra Modi : Jitendra Singh