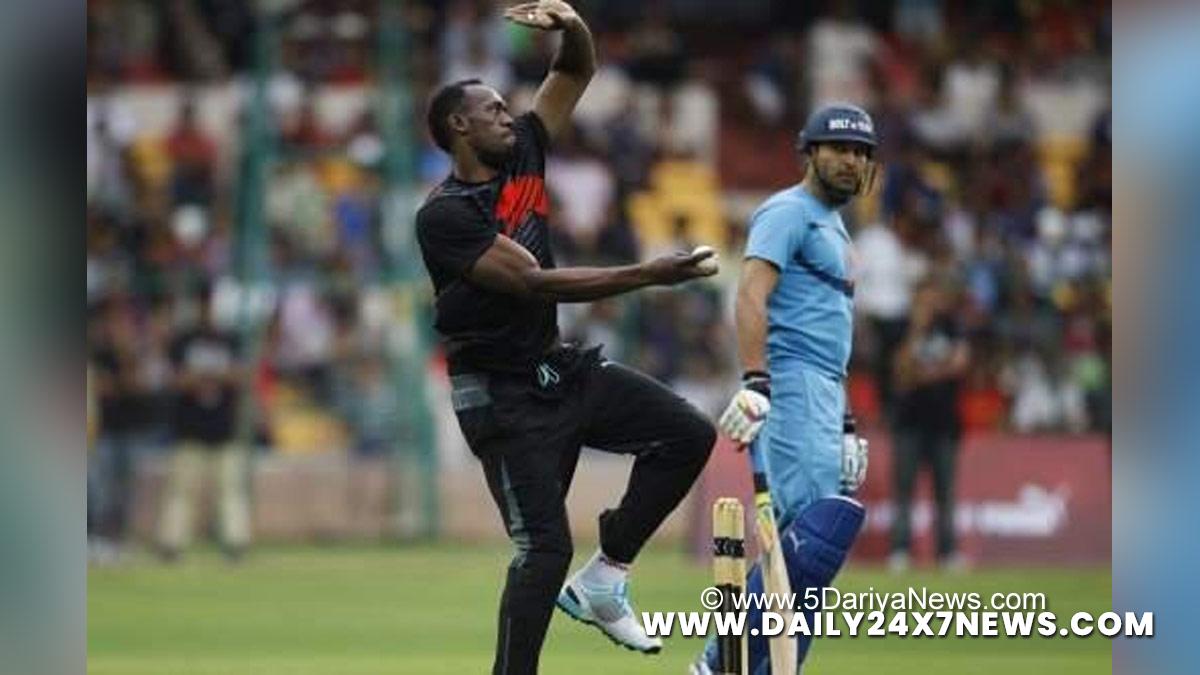 New Delhi : The fastest man on earth, Usain Bolt, is eyeing a career in cricket and is keen to play in the T20 Leagues like Jamaican superstars such as Chris Gayle and Andre Russell.Tapping into Bolt’s ambition to play T20 cricket, the Jamaican legend has been approached by Power Sportz, India’s first live digital Sports channel, to be part of a T20 League likely to be hosted at a venue in the Middle East soon.While Ms Kanthi D Suresh, the Founder and Editor-in-Chief of Power Sportz who are the rights holders of the League , was not available to confirm the venue, it is learnt that it could be held in the Gulf, which has emerged as a popular cricketing destination of late.An eight-time Olympic gold medallist and 11-time world champion, “Lightning Bolt” holds the current world record of 9:58 seconds in 100 metres, which he achieved at the IAAF 2009 World Championships in Berlin. And, while he might have retired from the track, the sprinter has on several occasions expressed the desire to show his “cricketing skills”.

Bolt has also revealed that he took up track and field as a career option, bowing to his father’s wish and that cricket was always his “first love”.
Bolt has expressed his interest to commit to cricket at the right time, as T20 Leagues are mushrooming in the Gulf and elsewhere. But the legend will have to back his sprinting skills with cricketing acumen if he wants to showcase his talent on the cricket field.It may not be easy for the Jamaican though, as securing a place alongside marquee international players, who understand the game like the back of their hand, will be a big task.It also remains to be seen whether Bolt would prefer to be a batter or a bowler. With his long strides, he could make for a great fast bowler, or he could be a valuable batter, given his strength to clout sixes or take cheeky singles.But, all eyes would be on ‘Bolt the runner’ when he takes the field. Will he be faster than Mahendra Singh Dhoni who is considered one of the fastest runners in the sport? Dhoni ran at 31km/hour to complete two runs against Australia in a T20 game. If Bolt were to run at his peak of 9:58 seconds, he would do it at 38km/hour!Only time will tell whether Bolt is able to match Dhoni’s pace on the pitch.Meanwhile, going by the trend, several leagues have been announced in the Middle Eastern in the recent past with the Emirates Cricket Board (ECB) making a big splash about a T20 League.The Kingdom of Saudi Arabia, which has the largest diaspora population, is also focusing on popularising cricket.The Indian Ambassador to Qatar, Dr. Deepak Mittal, during a recent interaction in Doha (Qatar), which will host the FIFA World Cup next year, said in the presence of leading industrialist Kumar Mangalam Birla (Chairmanm Aditya Birla Group), that, “We are also working on having a cricket league here in Qatar.”Hassan al-Thawadi, secretary-general of the Qatar Supreme Committee, has said that Qatar’s spend on infrastructure since 2010, including the new metro system, is projected at $200 billion, and direct costs of the World Cup is around $6.5bn.

Australian Open: Halep, Mertens advance to Round 4 with easy wins

Hardik Pandya will be motivated to show what he is capable of as a leader: Gary…