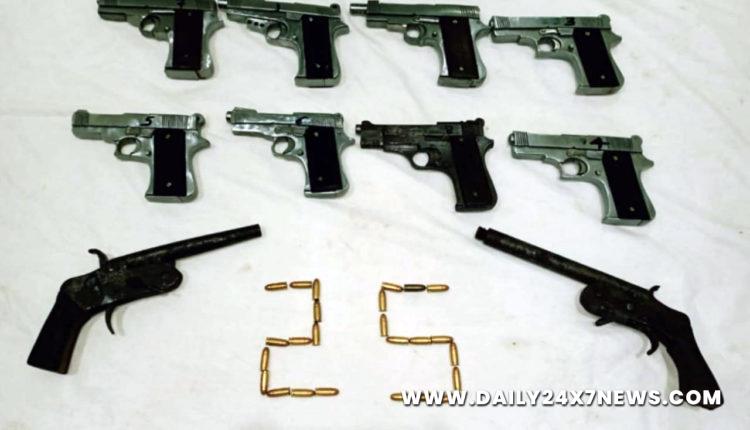 New Delhi : Delhi Police Special Cell has busted an interstate gunrunners’ racket by arresting two gang members and seizing 10 sophisticated pistols from them, a senior police officer said on Wednesday.”Both Sagar Gautam and Shyam Singh from Aligarh in Uttar Pradesh were involved in the sale of illegal weapons in NCR-Delhi and western UP after sourcing these from Madhya Pradesh for the last three years,” said PS Kushwah, DCP Special Cell.Both accused arrested from the ISBT at Anand Vihar on Tuesday told police that they had received the seized pistols and cartridges from an illegal manufacturer in Burhanpur in Madhya Pradesh.Sagar said that he was lured into gunrunning by a resident of a village near his own. Initially, he worked as a conduit for a year but subsequently he and his brother Raja developed their own network.Shyam Singh said that he was lured by Sagar to bring firearms from Burhanpur to the NCR and was paid Rs 5,000 to Rs 10,000 per trip.”Sagar purchased a pistol for Rs 7,000 and sold it in the NCR for Rs 25,000 to Rs 30,000. Efforts are afoot to identify other links to the syndicate,” the officer added.

ICC Awards of the Decade: Virat Kohli in fray for 5; five more Indians in race