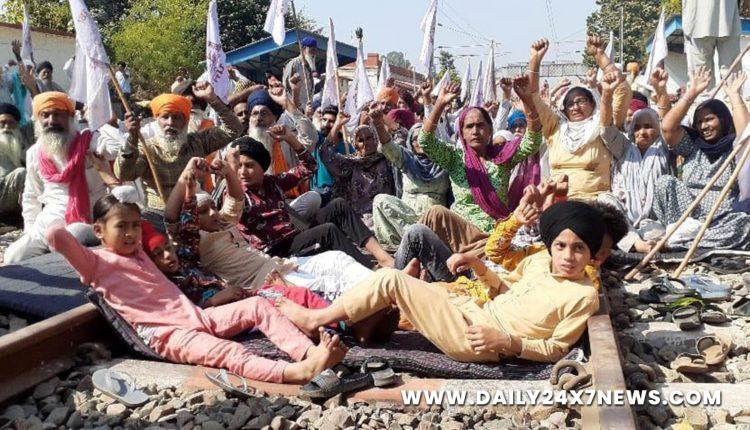 New Delhi : Amid the farmers protest at 32 locations in several parts of Punjab and Haryana, the Railways has lost revenue from freight to the tune of Rs 1,200 crore, the Railway Ministry said on Wednesday.A railway spokesperson in a statement said the Railways continue to lose revenue as freight operations remain forcibly suspended due to the track blockages in Punjab.”Till Date more than 2,225 freight rakes could not be operated upon carrying vital commodities. Loss already expected to have crossed Rs 1,200 crore already,” the spokesperson said.He said that the agitators have continued dharna at platforms and near railway tracks. “Train movement again suspended due to operational and safety considerations as agitators have suddenly stopped some train movements and sporadic blockade continued at various places, especially around Jandiala, Nabha, Talwandi Sabo and Bathinda,” he said.He said, as per the report at 6 a.m. on Wednesday, the farmers’ agitation was continuing at 32 places — 31 in Northern Railway and one in North Western Railway division.Farmers are protesting against the three controversial Agriculture Bills that were passed in Parliament in September.Railway Minister Piyush Goyal had written to Punjab Chief Minister Captain Amarinder Singh on October 26 seeking assurance about the safety of tracks and running staff to resume operations.
The official said that due to the continued blockages at sections of tracks in Punjab, there has been a major adverse impact on the freight movement and, hence, on the availability of vital commodities for the farm, industrial and infrastructure sector as well.He said that all passenger trains passing through the state of Punjab have been adversely impacted and till date more than 1,350 passenger trains have been cancelled, diverted or short terminated.”All inward and outward goods transportation, including essential commodities have been affected adversely in Punjab, Jammu and Kashmir, Ladakh and Himachal Pradesh. Number of freight trains, including loaded trains remained stuck as such for periods upto 15-20 days,” he said.The official also pointed out that many freight customers, after having suffered business losses, are getting diverted to other modes of transportation.The farmers agitation started on September 24 in Punjab after blocking railway tracks and stations. From October 1 onwards all movements had to be suspended as agitation spread all over Punjab which affected complete train operations in Firozpur Division, partially in Punjab area of Ambala, Delhi and Bikaner Division.The Railways resumed operation of limited goods trains on October 22. However, within two days the services were again suspended due to operational and safety considerations as sporadic blockade continued at various places, especially around Amritsar, Nabha, Talwandi Sabo, Firozpur, Moga, Jandiala and Bathinda.