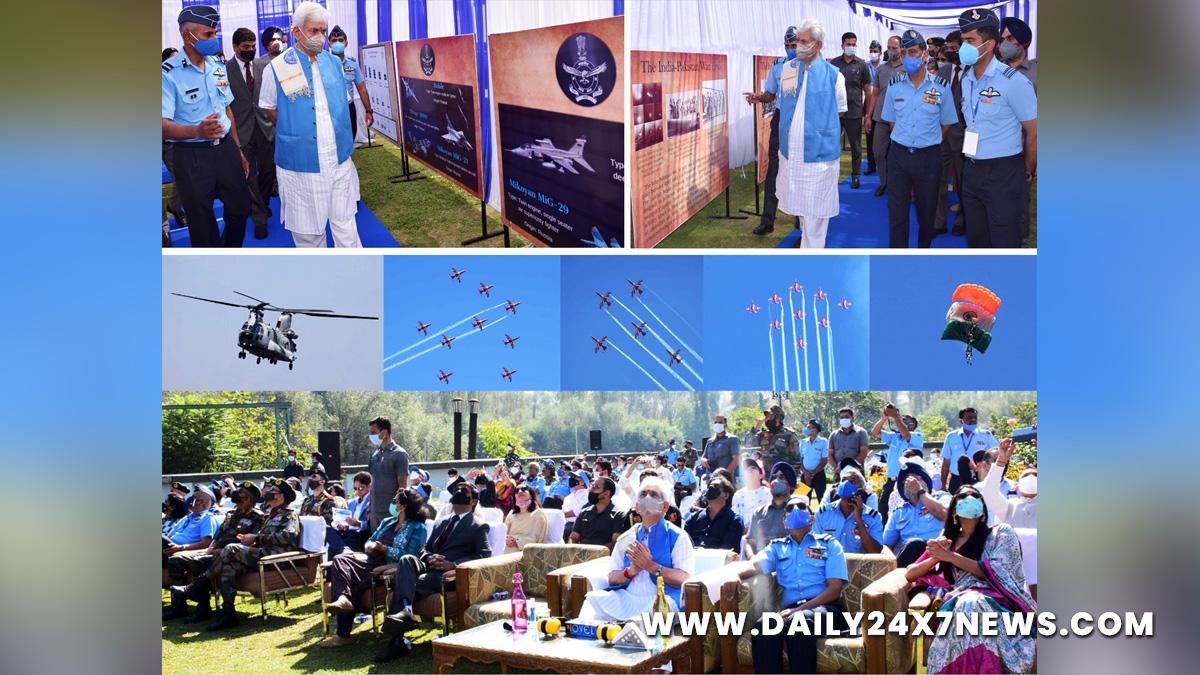 Srinagar : Lieutenant Governor Manoj Sinha today inaugurated Indian Air Force’s Air Show ‘Give Wings to Your Dreams’ as a part of the ongoing celebrations of Azadi Ka Amrit Mahotsav.Fighter aircrafts of IAF executed perfect maneuvers for the large crowd gathered at Dal Lake and SKICC lawns. The IAF’s Suryakiran aerobatic display team exhibited their formation flying skills while the Chinook helicopter also demonstrated its capability.This is the first-of-its-kind aerial display conducted by IAF after a gap of 13 years in Srinagar.Addressing the gathering at SKICC, the Lt Governor saluted the courage and valour of IAF personnel and paid tributes to the martyrs of the Air Force who made supreme sacrifices in the line of duty.Youth must take inspiration from our brave hearts, and discharge their social, moral duties with great responsibility and renew their resolve towards nation building, said the Lt Governor.He called upon the youth of J&K UT to join the Indian Air Force to give wings to their dreams.The Lt Governor underlined the need to encourage young minds to innovate and lead the way in technology. Apart from value-based education; financial, scientific and technological knowledge are the key drivers to move ahead on the path of development, he said.Under the able guidance of Hon’ble Prime Minister Shri Narendra Modi, we are making headways in establishing India as a Knowledge Economy and preparing our youth to meet the challenges of the future world, observed the Lt Governor.Besides inculcating the spirit of nationalism, peace, and communal harmony, the air show has also made the youth of the region acquainted with the new technological advancements achieved by the Indian Air Force, the Lt Governor added.