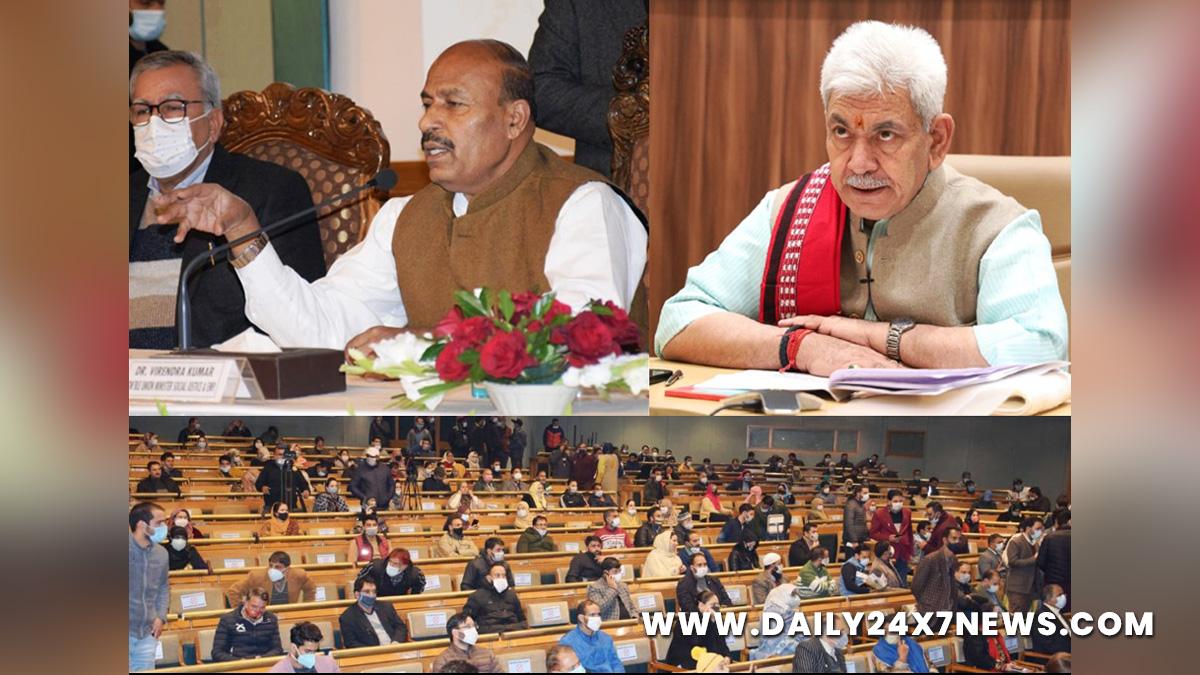 New Delhi/ Srinagar : Lieutenant Governor, Manoj Sinha today addressed the Nasha Mukt Bharat Abhiyan awards ceremony held at SKICC Srinagar, through virtual mode.The award ceremony aimed at acknowledging the contributions of District Administrations, NGOs, and Volunteers in eradicating the menace of drugs, where Union Minister for Social Justice and Empowerment, Dr Virendra Kumar conferred Nasha Mukht Bharat Abhiyan awards under different categories.In his address, the Lt Governor extended his sincere gratitude to Hon’ble Union Minister Dr Virendra Kumar for his cooperation and support to the mass movement against drug abuse in 10 districts of J&K.Drug abuse has emerged as one of the most serious social problems across the globe tearing apart our social fabric and posing a threat to mankind, the Lt Governor observed.UT Government is making dedicated efforts through its action plans, innovative prevention & rehabilitation strategies, besides creating supportive infrastructure, and continuous awareness dissemination to eradicate drug menace from Jammu & Kashmir, the Lt Governor said.The active participation of 3 lakh youth, 2.7 lakh women and more than 500 educational institutions have strengthened the government’s efforts to combat drug abuse in J&K, he added.

Malicious attempts are being made to push J&K’s Youth into the menace of drugs keeping them away from the mainstream. Let us all reaffirm our resolve and take a firm stance against drug abuse to give a befitting reply to Narco-Terrorism and bring back the misguided youth into mainstream arena, asserted the Lt Governor.Addressing the youth, the Lt Governor advised them to move ahead, participate in the development process and be role models for others.“I have full faith in the potential of the youth of J&K. We are committed to connect the present and future generations with the hopes and aspirations of their progress and build a society in which the Youth is the key driver of the development and prosperity of J&K”, the Lt Governor said.Prime Minister Shri Narendra Modi has paved the way for combating drug abuse through the National Action Plan for Drug Demand Reduction in 2018 which is having a greater impact in rooting out the evil of drugs from the society, the Lt Governor observed.The Lt Governor also underlined the importance of implementing multi pronged strategies like effective prevention strategies based on the community level and having an awaked social setting. “Now is the time for more synergized and comprehensive efforts to fight drug menace”, he said.Along with this, the youth clubs that have been set up in all the panchayats and wards of urban local bodies in Jammu and Kashmir will act as a catalyst in this direction, he added.The Lt Governor expressed happiness over the awareness programs that are being run in Rajouri, Kishtwar, Budgam districts by connecting Gram Sabha and Anganwadi workers to this campaign.The Lt Governor asked the DCs to identify fake de-addiction centers being run in both the Jammu and Kashmir divisions and take action against such centers within the ambit of law.