IND v NZ: Suddenly, I had to get into this mindset of playing red-ball cricket : Shreyas Iyer 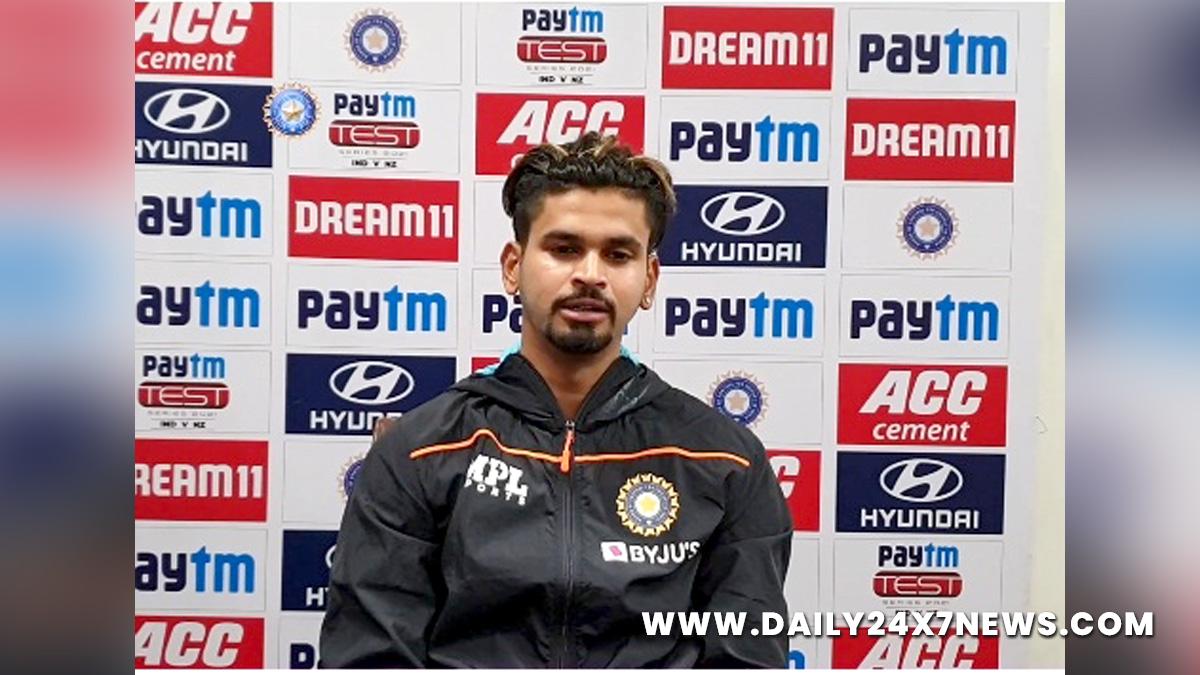 Kanpur : India batter Shreyas Iyer insisted that his debut against New Zealand in the first Test at Kanpur was something he didnt expect and had to get into the mindset of playing red-ball cricket. He added that head coach Rahul Dravid and captain Ajinkya Rahane had motivated him to do well before the start of the match. Iyer made his Test debut memorable by notching his first hundred in the format, making 105 runs off 171 balls, laced with 13 fours and two sixes.”When I came to Kanpur, I didn’t know that I was going to play. Rahul sir and the skipper told me that I was going to play the match. Suddenly, I had to get into this mindset of playing red-ball cricket. The last match I played was almost three years back, which was Irani Trophy (Cup). I took this as an opportunity and a challenge as well because once you play white-ball cricket for so long and then getting back to red-ball cricket and it is a different ball game. So, the mindset has to be set and routine has to be on point,” said Iyer in the virtual press conference after day two.”That’s what I focused on, rather than how I would play and whom I am going to face on the ground. I completely negated all the thoughts and focused more on my processes. I know I have got the skills and that was a really important thing to focus on. Also, Rahul Dravid and Ajinkya Rahane motivated me a lot before the game.

They said that you’don’t have to change anything as you have played this format before and have scored so many runs in Ranji Trophy with a really good average. So, that was my mindset before coming on the ground,” added Iyer, who became the 16th Indian batter to hit a Test hundred on debut.On the morning of his Test debut, Iyer was presented with his Test cap by legendary India batter Sunil Gavaskar. Talking about the same, Iyer said, “It was like a fairytale, to be honest. I never thought that I would be getting the cap from Sunil sir. I thought that Rahul sir would give me. Both are legends of the game and either of them would have given me the cap, I would have been happy. It was a great feeling and the way everything panned out, I was really happy but not satisfied today I thought.”He also revealed what Gavaskar had said to him before presenting the cap. “When Sunil Gavaskar sir gave me the cap, he told me one important‘point: ‘You don’t have to think about your past or your future, all you have got is the present and you got to focus on the n’xt ball’. That’s what I have been doing. My aim is to think about today and not think about what will happen in the next game. If I think about that, I won’t be in present’and won’t be able to perform on a given day. Whatever happens, happens for the best, and then take it on my stride.”

Iyer is hoping for India to get a good start on Saturday after New Zealand were 129/0 at stumps. “It’s going to be a really challenging day for us tomorrow with them getting off to a really good start. The wicket is not really helping the bowlers. So, we got to focus more on trying to give less runs as much as possible and try to build more pressure. One wicket would completely change the momentum towards us. Once the ball starts to spin or some cracks start to open on the wicket, it will really shift the momentum. I am hoping we get off to a good start tomorrow.”On a lighter note, the 26-year-old is hopeful of inviting his coach in Mumbai, former India batter Pravin Amre, to dinner now that he got a century in Test cricket. “Whenever I go to training with Pravin sir, he keeps‘on saying, ‘You have achieved a lot in life. You have been the captain of an IPL team, you have scored runs, this and that but in white-ball cricket. But your main achievement would be the Test cap and I am sure he would be really happy. He used to be like, ‘I will only come to your place for dinner if you score a century’. So, after today’s century, I will message him and invite him for dinner.”He signed off by saying that his century in Test cricket would make his father happy. “My dad loves Test match cricket the most. To give him this gift of a century would be the best achievement for me and also for him a’ a father. It’s a great feeling for both of us and my mom and dad have been supportive throughout my journey and been the pillars of my success so far. I would like to thank my whole family for being supportive.”

If Hardik Pandya is not bowling how can he be called an all-rounder, asks Kapil Dev