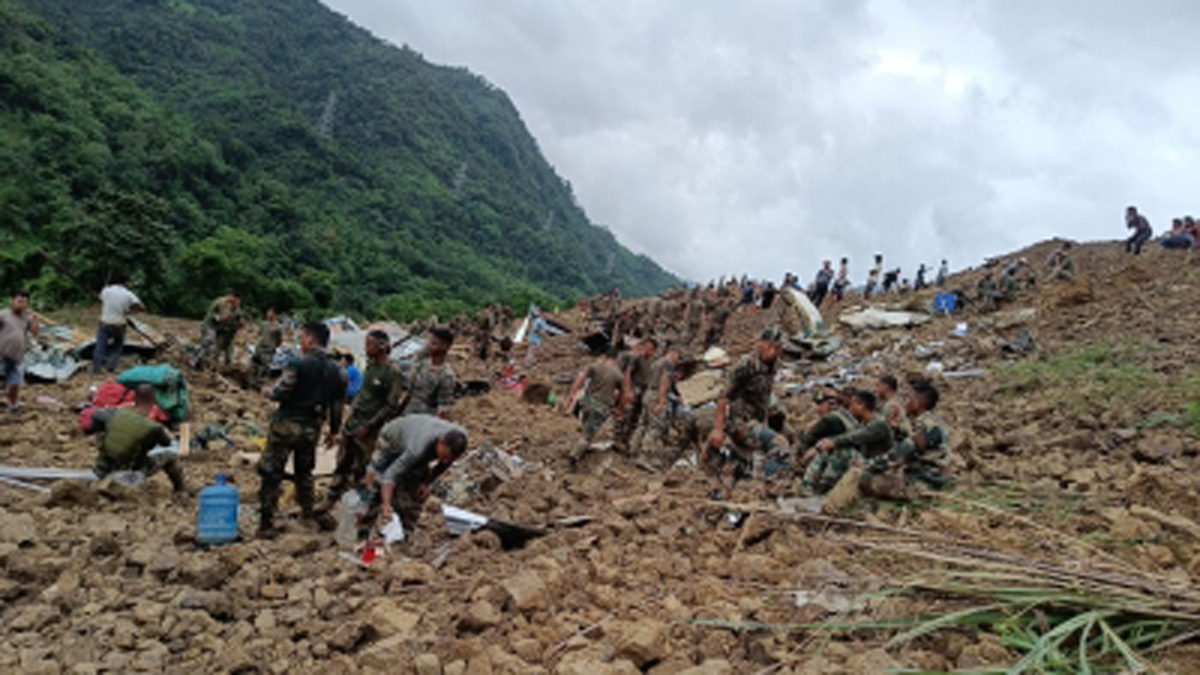 Imphal : Rescue operations by the central and state agencies were underway on Thursday after a massive landslide triggered by incessant rains during the past few days in Manipur’s Noney district buried dozens of people alive, officials said.

Assured all possible support from the Centre. I pray for the safety of all those affected. My thoughts are with the bereaved families. May the injured recover soon.”Home Minister Shah in a tweet said: “Spoke to N. Biren Singh and Ashwini Vaishnav in the wake of a landslide near the Tupul railway station in Manipur.

Rescue operations are in full swing. A team of NDRF has already reached the spot and joined the rescue operations. Two more teams are on their way to Tupul.”In an advisory, Noney Deputy Commissioner Haulianlal Guite said the landslide occurred at the Tupul Yard Railway construction camp.

The landslide also obstructed the course of the Ijei river which flows through Tamenglong and Noney districts.As the situation is still unfolding, the Deputy Commissioner has warned the general public, especially children, against going near the river.If the situation further deteriorates, it would wreak havoc to the low lying areas of Noney district, he added.

The district administration, in coordination with various national and state disaster agencies, is undertaking search and rescue, relief operations work.People have also been advised against travelling along the National Highway 37 due to multiple road blockages due to landslides.

The district administration has also launched several helpline numbers for the affected people to call for assistance.The under construction Tupul station building, track formation and camps of construction workers got damaged as a result of the massive landslide.

Senior Railways officials, engineers and equipment on construction sites have been pressed into the rescue efforts.So far, 19 people have been rescued and the injured individuals are being medically treated at Noney Army Medical unit.

However, bad weather and fresh landslides are affecting the rescue operations.Concerted effort by all is underway to rescue the missing individuals.The Army helicopters are also being used to airlift the critically injured, the CPRO said.

The injured Territorial Army personnel are being treated at the Noney Army Medical unit.Army helicopters are on stand-by, waiting for the weather to clear, Lt. Col. Vaishnava said.Meanwhile, Chief Minister Biren Singh has held an emergency meeting.

“Called an emergency meeting to assess the situation of the landslide in Tupul today. The search and rescue operation is already underway. Let’s keep them in our prayers today. Ambulances along with doctors have also been dispatched to assist in the operation,” he said in a tweet.

Scientists find norovirus, other gut viruses can spread through saliva

4 killed as car overturns after tyre-burst in Telangana

Wildfires spread in mountains of France