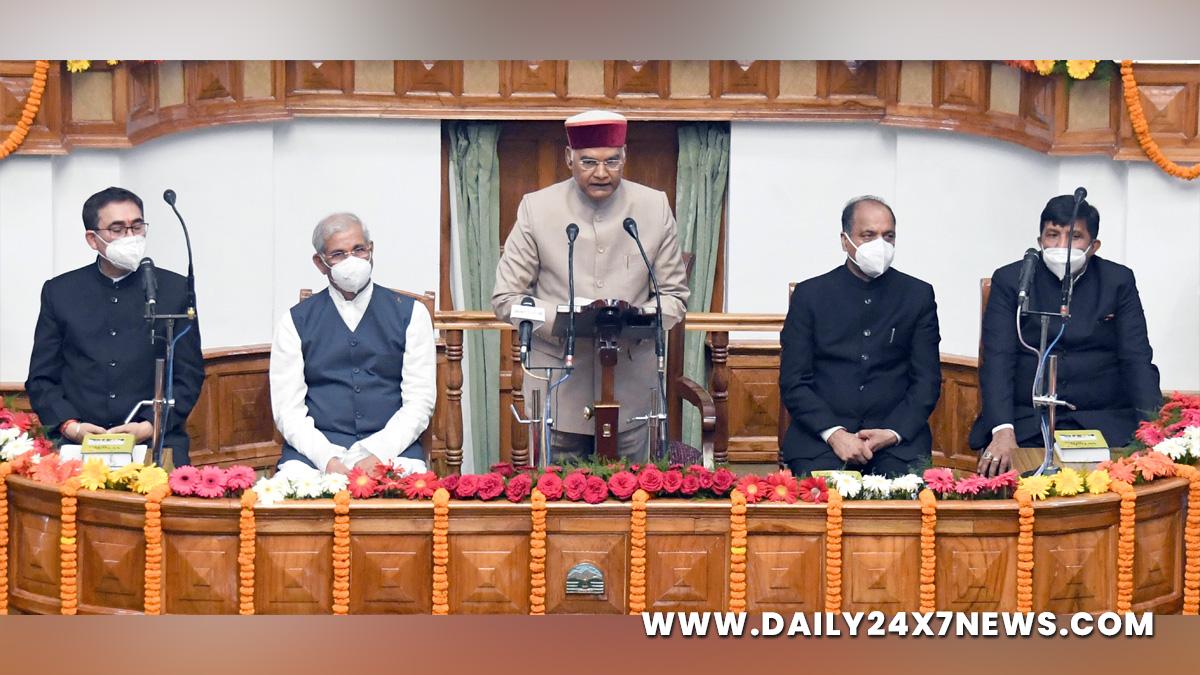 Shimla : Urging the farmers to adopt natural farming and keep the land free from chemical fertilizers, President Ram Nath Kovind on Friday said the country is proud of the development story written by Himachal Pradesh in the past 50 years.Addressing the special session of the state legislative Assembly here to mark the golden jubilee of statehood, he said all previous governments of the state have played an important role in this developmental journey.He appreciated contributions made by former Chief Ministers – late Y.S. Parmar, late Thakur Ram Lal, Shanta Kumar, Prem Kumar Dhumal and late Virbhadra Singh.”The initiative taken by the state government to take the development journey of the state to the people is highly commendable,” he said.Himachal Pradesh has set new dimensions of development in various fields.Quoting a report by NITI Aayog, he said Himachal Pradesh “ranks second in the country in the Sustainable Development Goals — India Index 2020-21”.Himachal Pradesh is the leading state in the country on many parameters.Pointing to the fact that water of rivers of the state is clean and soil is full of nutrients, the President urged the farmers of the state to adopt natural farming more and more and keep their land free from chemical fertilizers.He said eco-friendly agriculture, horticulture, tourism, education, employment, especially self-employment, etc., have immense potential for sustainable development in Himachal Pradesh.”This state is full of natural beauty.

Therefore, we should make continuous efforts for development while preserving its natural beauty and heritages.”Referring to the pro-active steps taken by the government of Himachal Pradesh for protection and conservation of environment, the President said it is a matter of pride for the people and government of Himachal Pradesh that in 2014 the Assembly became the first paperless Assembly of the country.”It is a good example of efficient use of technology, protecting the environment and saving economic resources.”He said for the protection and conservation of the environment, the state government has made many commendable efforts, including banning the use of plastic.Speaking about the nature of people, the President said the peace loving, yet brave people of Himachal Pradesh, have been valiantly responding to injustice, terror and any attack on the country’s pride when required.He pointed that youth from almost every village of Himachal Pradesh serve in the Indian armed forces.He said over 100 years old Ram Sharan Negi of Kinnaur was the first voter of independent India and is now the brand ambassador of the Election Commission of India.Union Minister for Information and Broadcasting Anurag Thakur, former Chief Minister Prem Kumar Dhumal and former Vidhan Sabha Speakers also attended the session.This is the third occasion when the President addressed the assembly. Prior to him, A.P.J. Abdul Kalam and Pranab Mukherjee had addressed the special sessions.