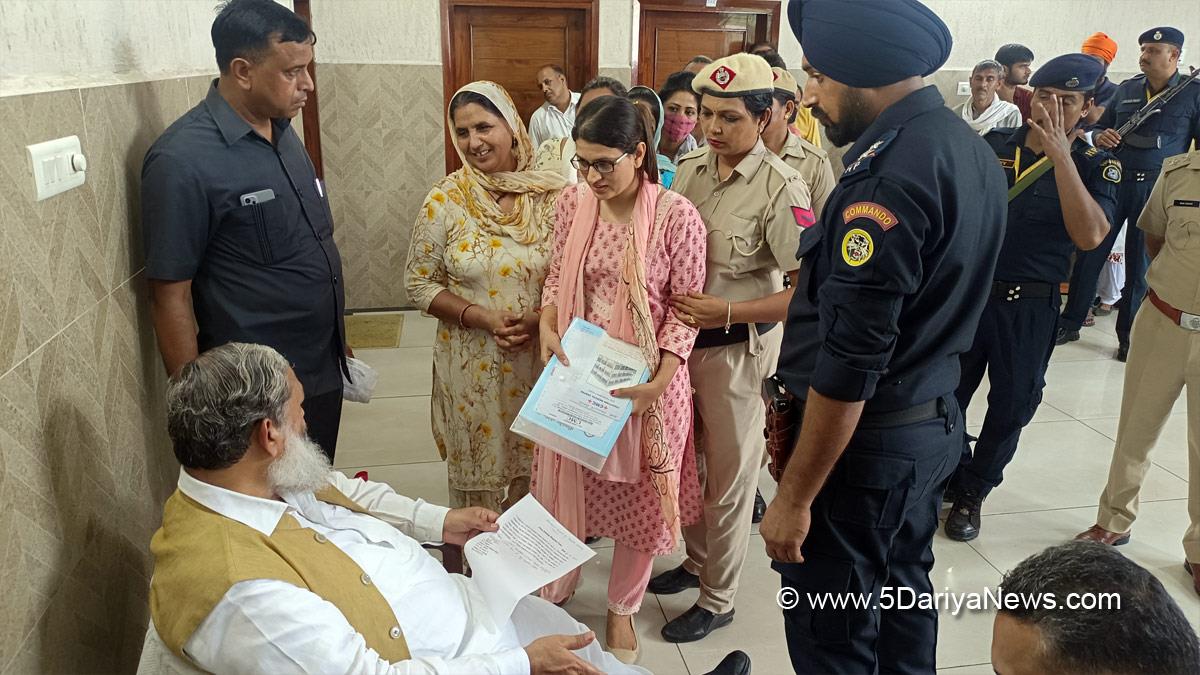 Rohtak : Haryana Home and Health Minister, Anil Vij today suspended the head constable Sushil Kumar who demanded money from the soldier in Rohtak and directed the SP Rohtak to investigate the matter.

Along with this, directions were also given to register a case against those who attacked and assaulted the army jawan’s house. Vij gave these directions while taking immediate action on the complaint of a soldier who came from Rohtak during the Janata Darbar held at Ambala Cantonment today.

During the Janata Darbar, he heard the problems of more than four thousand applicants who came from every corner of the state and also gave directions to the concerned officers for their disposal.

He said that the military personnel guard our borders on the snowy peaks and it is their priority to solve the problems of the soldiers and their families. He cannot tolerate under any circumstances that action is not taken on the grievances of the soldiers.

Solving the problems of soldiers is among his priority.At the same time, seeing the increasing number of complainants in the Darbar, Home Minister Vij himself came down to take a complaint among them.

In case of burning the house, action should be taken before reaching the applicant’s house – Anil Vij
Giving their complaint, a family from village Kharkadi in Bhiwani district said that some miscreants attacked their house and burnt the house by pouring petrol, in this case, despite complaining to the police, proper action is not being taken. The Home Minister called the Bhiwani SP and directed him to take action against the accused before the applicant reaches Tosham.

Similarly, a person who came from Kurukshetra stated in his complaint that his 6-year-old son studies in Grin Fields International School. A few days back, his son was seriously injured after suddenly falling down from the school van, who is still under treatment.

In the Janata Darbar, a woman from Palwal assured the applicant that “when I am sitting you will get justice” when the police did not take action in the rape case. In this matter, the Home Minister directed to form an SIT and investigate it.

I will straighten all the miscreants in Haryana – Vij
At the same time, a person who came from Panipat, while giving his complaint, said that a few days ago, when he was going to take medicines related to the crop, some goons beat him up on the way.

Despite complaining to the police, no action was taken. Similarly, a person who came from Vallabhgarh said that some miscreants attacked him and injured him, also tried to open fire on him.

In this case, the Home Minister called the Faridabad Police Commissioner and directed him to take action against the accused involved in the case. The Home Minister told the applicant that I will make all the miscreants in Haryana straight. Action will be taken on your complaint.

Vij gave money from his pocket to the young man in the darbar
The youth, who came from Mulana during the Janata Darbar, told that he is originally a resident of Bihar and his financial condition is not good and in such a situation he cannot even take help from his family. He also has only a few rupees to go to Mulana.

After listening to the youth, the Home Minister gave the appropriate amount from his pocket to the youth and handed over the application of the applicant to the Additional Deputy Commissioner present on the spot, for how the youth could be helped regarding financial assistance.

A permanent bridge will be constructed soon for the convenience of the villagers living across Makora Patan near the Ravi River : Kuldeep Singh Dhaliwal

No person, no matter how tall or powerful, will be spared if found in illegal…