Construction of roads and railway line is being done at a fast pace in the State : Manohar Lal 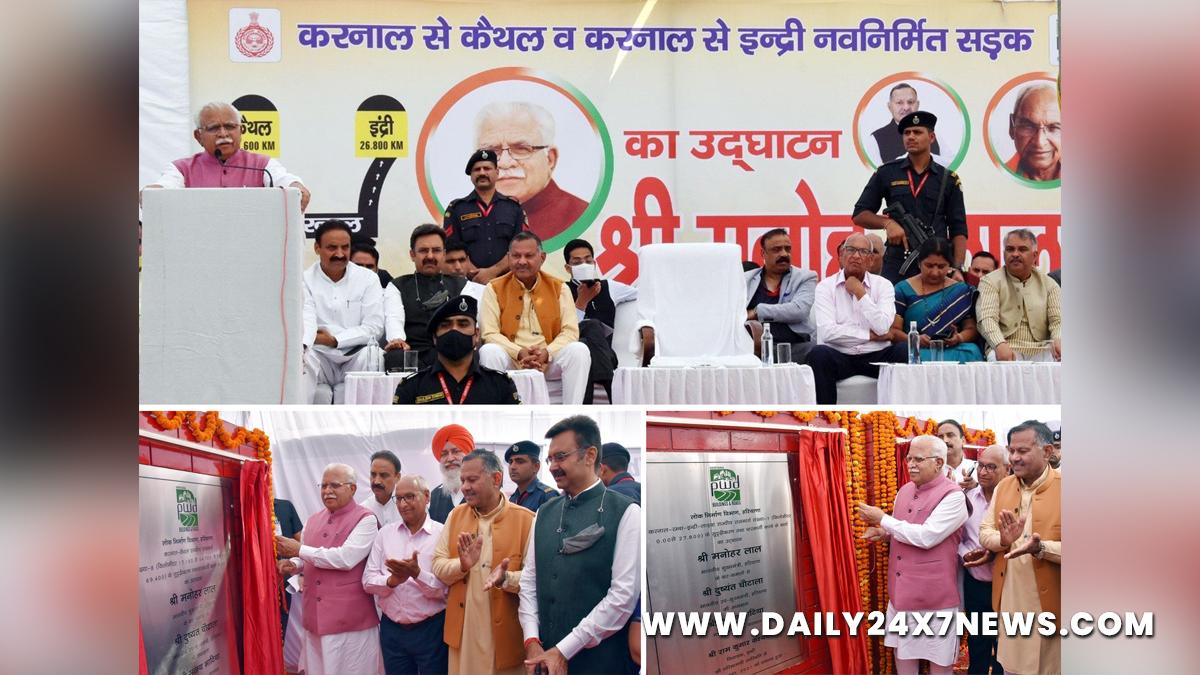 Chandigarh : Haryana Chief Minister, Manohar Lal said that the work on construction of roads and railway line tracks is moving at a fast pace in Haryana. That day is not far when Haryana will be leading in infrastructure. This will also enhance the financial status of the people of the country as well as the state. Haryana Government has got approval of 17 National Highways from the Central Government, for a stretch of 1070-km, of which work on 11 highways has been done and work on the remaining highways is being carried out. On Tuesday, the Chief Minister also inaugurated two road projects in Karnal built at a cost of Rs 225 crore and an oxygen plant at Kalpana Chawla Medical College at a cost of Rs. 50 lakh.Chief Minister, Sh. Manohar Lal said that 12 new bypasses are being built in the State at a cost of Rs. 950 crore. He said that in Karnal, projects worth Rs. 500 crore have been inaugurated of which nine projects worth Rs 284 crore were inaugurated on Monday and three projects worth Rs 225 crore were inaugurated on Tuesday. Four lanes of Karnal-Indri-Ladwa Road and Karnal-Kaithal Road will smoothen travel and curtail accidents. The Chief Minister assured the people of Karnal that all the 7 routes from Karnal would be four-laned in near future. So far, 4 roads have been completed, the remaining three roads will also be four laned soon.

Roads adjoining more than 3 villages will be widened from 12 feet to 18 feet
The Chief Minister, Sh. Manohar Lal said that the width of the roads adjoining three or more villages would be widened from 12 feet to 18 feet. Apart from this, all the paths of 5 karam will be made by Marketing Board or PWD. At present work is on 346 routes is going on while work has been completed on 1,174 routes. This will facilitate the movement of people from villages to mandis.
Infrastructure essential for economic progress
Chief Minister, Sh. Manohar Lal said that infrastructure is an essential component of economic progress. Rail lines and roads are being constructed in the state. He said that the State Government has completed the 135-km route of KMP and KGP in record time. Apart from this, the Orbital Rail Corridor has been approved from Palwal to Kundli, which will be built soon. The Chief Minister said that a National Highway has also been approved for Panipat to Dabwali which will be built soon. Along with this, the work of four laning of Jind-Gohana-Sonipat, Ambala-Saha-Shahabad Highway is also going on. In a ranking issued recently by an institution, Haryana has been ranked second in infrastructure, he added.
Prime Minister praised the development works of Haryana

Chief Minister, Sh. Manohar Lal said that the Prime Minister, Sh. Narendra Modi has also praised the developmental works being done in Haryana. He added that the schemes being implemented in Haryana are also being emulated by other states. In fact, the Central Government also implemented these Schemes.
There will be no unmanned crossing
The Chief Minister said that there will be no unmanned crossing in Haryana and work is already going on in this regard. Only 64 railway over bridges and railway under bridges were built in 48 years, whereas the present government has built 56 railway over bridges and under bridges in 7 years. Apart from this work is being done on 40 railway bridges. This will reduce accidents at unmanned crossings.
Roads should be opened in the interest of the general public
The Chief Minister, Sh. Manohar Lal said that the common people are facing problems due to the blocked roads on Singhu and Tikri borders. These roads should be opened in the interest of the public for smooth flow of traffic. He said that there is a 5-foot road open at the Tikri border and there is problem in the passage of big vehicles. While talks are on, however, if some people (protesting farmers) will stop being stubborn and start communicating then the matter can be resolved quickly.
Panchayat elections will be held after the decision of the court
Speaking on the Haryana Panchayat elections, the Chief Minister said that the matter related to the Panchayat elections is under consideration in the Punjab and Haryana High Court, as soon as the decision of the Court is pronounced, the Panchayat elections will be held soon.
20 girls topped in Class 10th were honoured
Chief Minister, Sh. Manohar Lal honoured 20 girls who topped Class 10 across the state and also handed over a cheque of Rs. 21,000. The Chief Minister wished them all the best for performing better in future.On this occasion MLA Nilokhedi, Sh. Dharampal Gounder, MLA Indri, Sh. Ramkumar Kashyap, MLA Gharaunda, Sh. Harvindra Kalyan and other senior officials were present on the occasion.

Team of officers constituted to have better coordination with GOI for supply of DAP : Randeep Singh Nabha

Kubbra Sait shares a special note on her character in ‘Foundation’