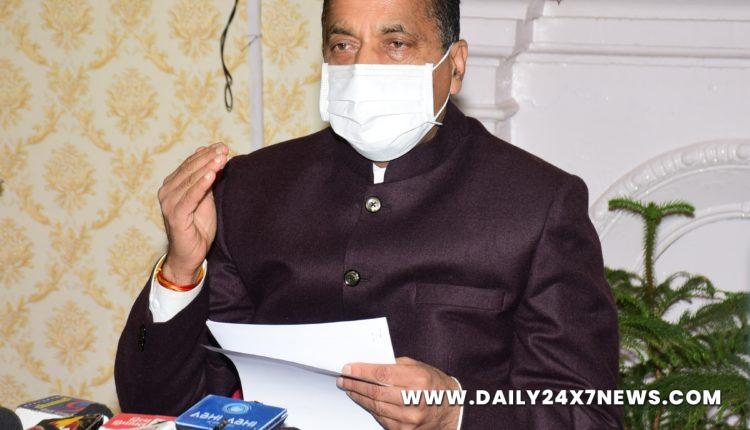 Shimla : The Government of India has today approved 12 projects amounting to Rs. 194.58 crore under Central Road and Infrastructure Fund (CRIF) scheme for the State.It is worth mentioning to note that Chief Minister Jai Ram Thakur has raised the issue for according approval to these projects with Union Minister for Road, Transport and Highways Nitin Gadkari during his recent visit to New Delhi.This is attributed to the consistent efforts of the Chief Minister that Government of India has sanctioned these 12 projects.Jai Ram Thakur thanked the Government of India for granting approval for these ambitious projects. He said that these projects would go a long way in providing better connectivity facility to the people of the State besides improving the quality of roads.He said that roads were lifeline of hilly areas and were vital for development agenda and make a crucial contribution to economic development and growth.Chief Minister said that these projects include Rs. 16.62 crore 80 meter span bridge over Markanda river and 27.60 meter span bridge over Khad on Gurudwara Sahib NH-07 to Markanda Nadi in Sirmour district, Rs. 22.82 crore 150 meter double lane span bridge with footpath over river Beas at Kothipattan on Dharampur Sandhole road via Seoh langana in district Mandi, Rs. 10.07 crore 60 meter span bridge over Markanda river on Moginand to Suketi road in Sirmour district, Project worth Rs. 8.39 crore for improvement, widening and strengthening of Ara chowk to Jourbar road in Kangra district, Rs. 14.60 crore for preliminary project report for 85 meter span double lane pre-bridge with footpath over Beas at Thalout in Mandi district and Rs. 21.03 crore for widening and strengthening of Parour Dheera Naura road upto Purba road in Kangra district.He said that approval for Rs. 15.56 crore for improvement and widening of Karchham Sangla Chhitkul road in Kinnaur district, Rs. 31.63 crore for improvement and strengthening of Alampur Harsipattan road in Kangra district, Rs. 32.66 crore for improvement and widening of Sujanpur to Hamirpur via Kot Chouri Patlander Chhamaian road in Hamirpur district, Rs. 8.03 crore preliminary project report for 40 meter double lane span bridge with footpath over Bekhli Khud at Lambathach in Mandi district, Rs. 8.37 crore for construction of 62 meter span double lane composite steel girder bridge in Shimla district and Rs. 4.80 crore for construction of 40 meter double lane span bridge over Sarotha Nallah on Chamba Sahoo Kiri road in Chamba district has also been given by Central Government.Chief Minister said that the specifications for these roads would be similar to those of National Highways works to the extent of pavement width, crust thickness and geometrics.He said that the State Government would ensure completion of these works with in stipulated time so that people could be benefitted at earliest.