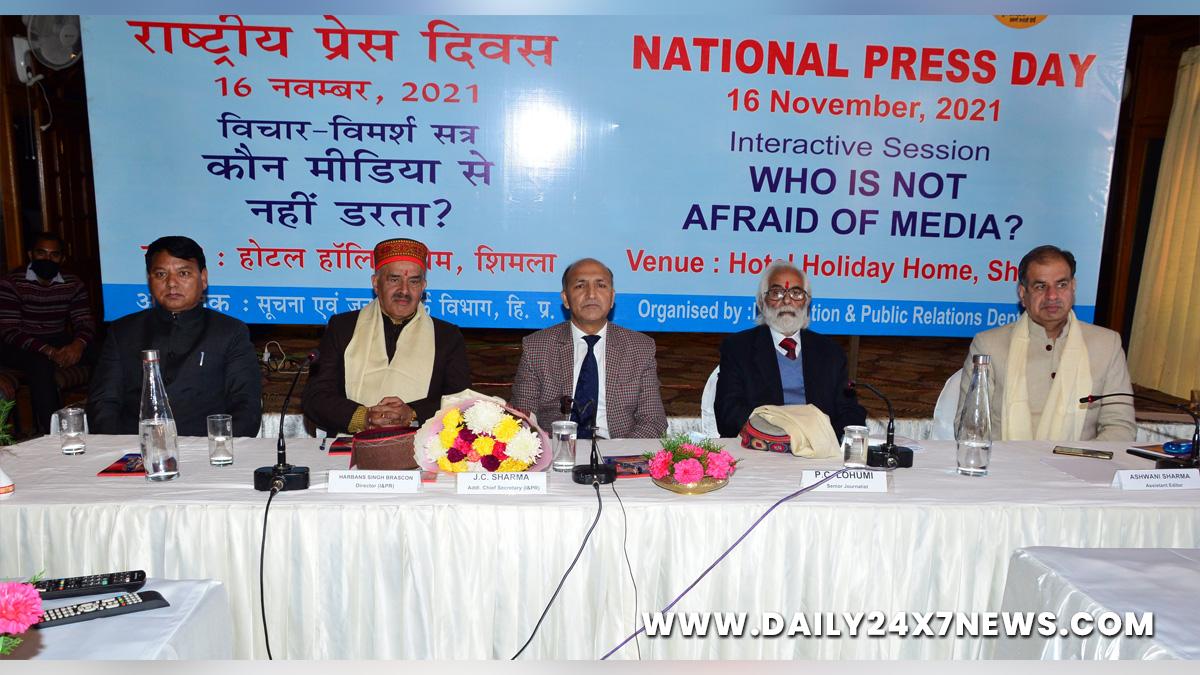 Shimla : The department of Information & Public Relations organised the state level function here today at Hotel Holiday Home on the occasion of National Press Day on the theme ‘who is not afraid of media?’.Speaking on the occasion, Additional Chief Secretary, Information and Public Relations J.C Sharma said that in a democratic set up, the Press was a vital pillar and the media had a great responsibility for capacity building so that people could contribute efficiently in running this system. Besides, the media also had onus to provide factual and true information to the masses to maintain a cordial environment in the society so that they were not carried away by the false propaganda of the anti-social elements.He said that constructive criticism was must for making public opinion and it also help the governments to get proper feedback of the people besides taking corrective measures for their welfare. He urged the Journalists to also take part in discussions on mygov portal of the state government for their suggestions on various important issues like drug abuse and road safety etc. He said that Right to Information has a very meaningful and constructive role but sometimes few people try to misuse it and therefore it was necessary that before reporting on information collected through RTI, the media person check the pros and cons to avoid any damage to the society. He thanked the media for the assistance provided to the state government during the Covid pandemic and said that the state government was always considerate to provide them better work culture. In his key note address, senior Journalist P.C. Lohumi said that it was high time to introspect why media was losing credibility and suffered decline during last about three decades.

Despite expansion and availability of facilities, the effect of media had gone down and it was becoming more like a business as a result of which, the voice of common man was not being aired. He said the Journalists should have courage for reporting news based on true facts without any fear or hesitation for which constant communication with the masses with all sections of the society was must for getting true information. It was the duty of the Press to maintain its credibility and would become meaningful in a true sense only by giving voice to those who were not being listened. He added that there should be more fear of media so that all those resourceful and influential people involved in corrupt practices could be checked.Assistant Editor, Outlook magazine and senior Journalist Dr. Ashwani Sharma stressed that the credibility of journalism should be maintained at every cost and the journalists should endeavour for value addition in their professional work by educating, informing general masses and creating public opinion on major social concerns. He said that in terms of technology we have advanced but at the same time the media was losing credibility and therefore it was must to report on facts instead of creating a narrative by mixing news and views. He said that deterioration of media has crated of feeling of fear in common and honest people while those at fault are hardly afraid as they try to manage the media by different means. He expressed concern that the investigative journalism was not seen these days and the media needs to work with transparency and report fearlessly. He underlined that we need an independent and fearless media which could present true picture of the society.

While sharing his views, Chairman, HIMFED and senior Journalist Ganesh Dutt said that as media was passing through the credibility crisis, the National Press Day was a special occasion for Journalists for introspection. They share great responsibility in raising the shortcomings of the governance but at the same time their observation could not be final. He said no media person should have any fear but should work with journalistic ethics, responsibility and honestly to guide the society.Director, I&PR Harbans Singh Brascon in his welcome address greeted the media person on the special occasion of National Press Day. He said the main objective of organising this day was to carry forward the high values of free and transparent of journalism as has been envisaged by the Press Council of India. He said the media in Himachal Pradesh had been playing a pivotal role in taking policies, programmes and welfare schemes of the state government up to the grass root level besides highlighting the grievances of the common man which helps the government in working as per their expectations and aspirations. An interactive session was also held on this occasion in which media fraternity deliberated on various issues and challenges before the media in present times and gave their valuable suggestions on how media can contribute more effectively for the betterment of the society.Additional Director, I&PR Arti Gupta, Joint Directors Pradeep Kunwar and Mahesh Pathania and other senior officers were also present on this occasion.