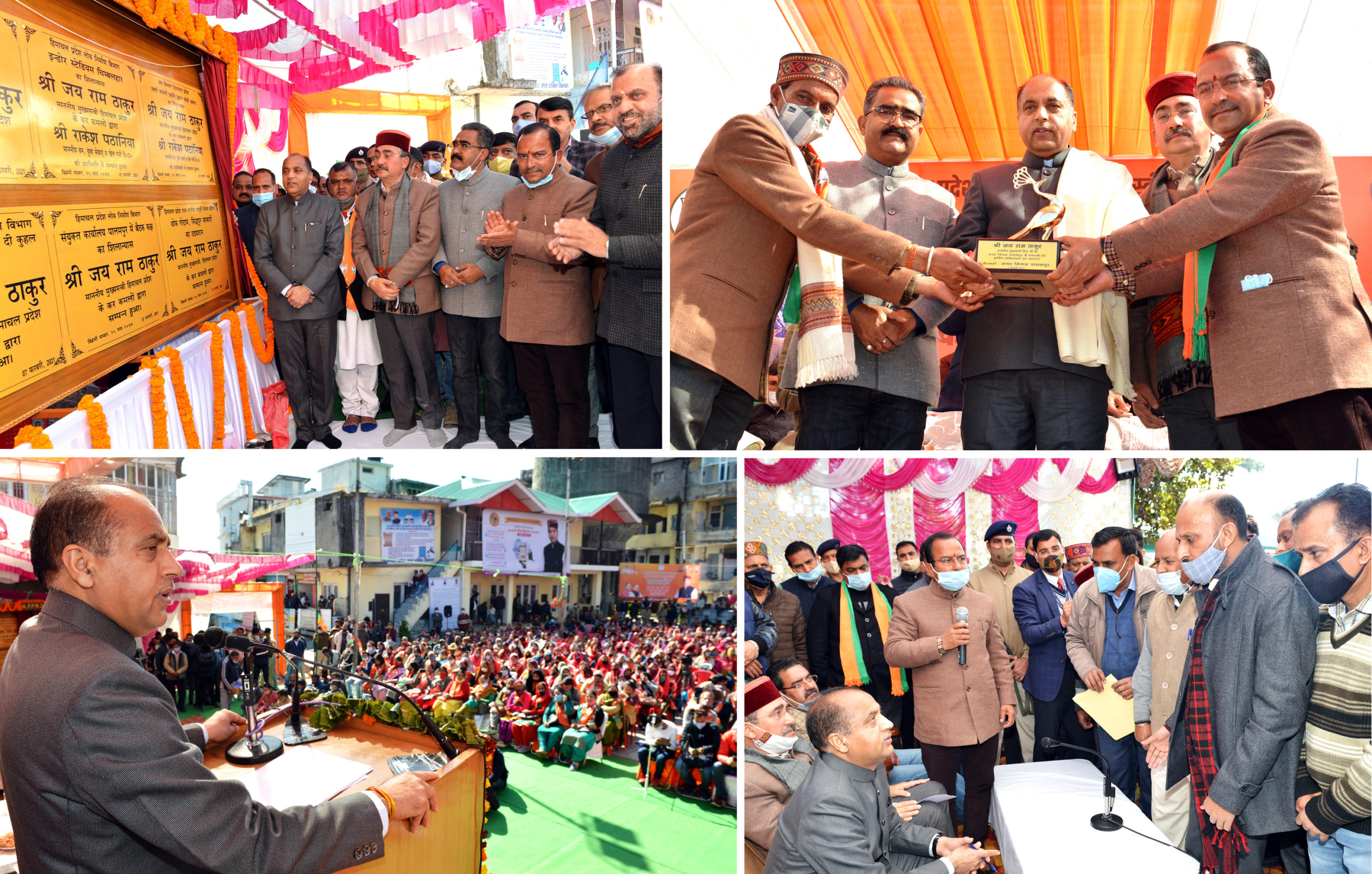 Palampur : Chief Minister Jai Ram Thakur today laid foundation stones and inaugurated developmental projects worth Rs. 45.66 crore in Palampur area of Kangra district. He inaugurated developmental projects worth Rs. 5.94 crore which includes Rs. 1.68 crore flow irrigation scheme Maniara Tappa and Jugehar, Rs.2.89 crore flow irrigation scheme Rani Di Kuhl and Rs. 1.37 crore civil supply godown at Sidhpur Sarkari. Chief Minister laid foundation stones of projects of Rs. 39.72 crore including improvement of Kasba Jugehar water supply scheme in Gram Panchayat Kothi Pahra of Tehsil Palampur to be constructed at a cost of Rs. 2.04 crore, Rs. 2.90 crore improvement of water supply scheme in Gram Panchayat Chowki Khalet, Rs. 2.04 crore improvement of water supply scheme in Gram Panchayat Dadh, Rs. 4.54 crore improvement of water supply scheme to P.C. habitations under Drognoo, Thala and Bhagotla under WSS Kandi Bhagotla, Rs. 5.18 crore source level augmentation of various water supply scheme under Gram Panchayat Nain, Nanahar, Speru, Rajehar Bhadraina Kandi, Sungal and Padhiarkhar, Rs. 3.30 crore head weir left out work and distribution system of flow irrigation scheme Bhadruhl Kuhl, Rs. 17.45 crore indoor stadium at Palampur near Chimbalhar, Rs. 62.38 lakh Meeting Hall on the third floor of Combined Office building at Palampur and Rs. 1.65 crore Forest Park at Chowki Khalet in Tehsil Palampur. While addressing the people on the occasion at Gandhi ground Palampur, Chief Minister said that the present State Government was committed towards the planned and systematic development of the urban areas of the State. He said that a few Opposition leaders were against the decision of upgrading Palampur at Municipal Corporation as they were fearing their political end and the fact was that they had done nothing for development of this beautiful city. He said that the Opposition were misleading people of the area regarding tax, but the people need not fear as neither they would be imposed tax nor they would be deprived of the benefits of MNERGA. They would be able to get benefit of Mukhyamantri Shahri Ajiva Yojna on the analogy of MNERAGA. He said that it was the present State Government which made 379 new panchayats in the State to ensure better development of the rural areas as well. He said that it was after the long 15 years that new panchayats were created in the State.Jai Ram Thakur said that the people of the State appreciated this decision of the State Government and 102 panchayats were elected unopposed and most of these were the new panchayats. The people of the State also gave their wholehearted support to the State Government in the PRI and Urban Local Bodies elections. He said that about 75 percent seats in the Panchayats were won by BJP supported candidates and out of the 69 Block Smities, BJP has won 61 and out of the seven Zila Parishads, the BJP has won all. This shows the support the BJP Government was getting in the State due to its people friendly policies and programmes, he added.
Jai Ram Thakur said that the Opposition in the country and state had no issue and was directionless and leaderless. He said that the nation today was secure in the hands of Prime Minister Narendra Modi who was committed to make India a most strong nation of the world. It was under his leadership that India not only was successfully coming out of the Corona pandemic, but an antivirus vaccine was also being administered to the people. He said that the State Government has also started vaccination for the frontline warriors. As many as 93000 frontline warriors would be administered this vaccine in the first phase, he said.Chief Minister said that welfare schemes such as Himachal Ghrihini Suvidha Yojna, HIMCARE, Sahara Yojna had proved a boon to lakhs of the people of the State. He said that the previous Congress Government did nothing towards welfare of the poor and the downtrodden. He said that the present State Government inherited a loan burden of over 47,500 crore from the previous State Government due to their unmindful and wasteful expenditure. He said that Jan Manch has ensured redressal of public grievances at their doorsteps. He said that this has helped the poor people in prompt redressal of their various issues. He said that even the Opposition leaders were deriving the benefits of this scheme. Going a step forward the State Government started Chief Minister Helpline 1100 which has ensured redressal of their grievances making a phone call, he added.Jai Ram Thakur announced that a statue of Dr B.R. Ambedkar would be installed at the premises of Mini Secretariat, Palampur. He said that Shahid Saurabh Kalia Park would be restored and developed by spending an amount of Rs 6 crore. He announced Rs 50 lakh for Golden Jubilee Nature Park being constructed at Palampur at a cost of Rs 1.65 crore. Speaker, HP Vidhan Sabha Vipin Singh Parmar said that the state was forging towards becoming ‘Swarnim Himachal’ under the able leadership of Chief Minister Jai Ram Thakur. He said that unprecedented development had been witnessed during the last three years in various sectors under the dynamic leadership of Jai Ram Thakur.Industries Minister Bikram Singh said that announcement of a new Municipal Corporation at Palampur, Mandi and Solan was the historic decision made by the Chief Minister for planned development of these three towns.Chairman Wool Federation Trilok Kapoor welcomed the Chief Minister and thanked him for dedicating developmental projects worth crores of rupees in Palampur area.MLAs Ravinder Dhiman and Mulk Raj Premi, former MLAs Praveen Sharma and Dulo Ram, District BJP president Hari Dutt Sharma were also present on the occasion among others.