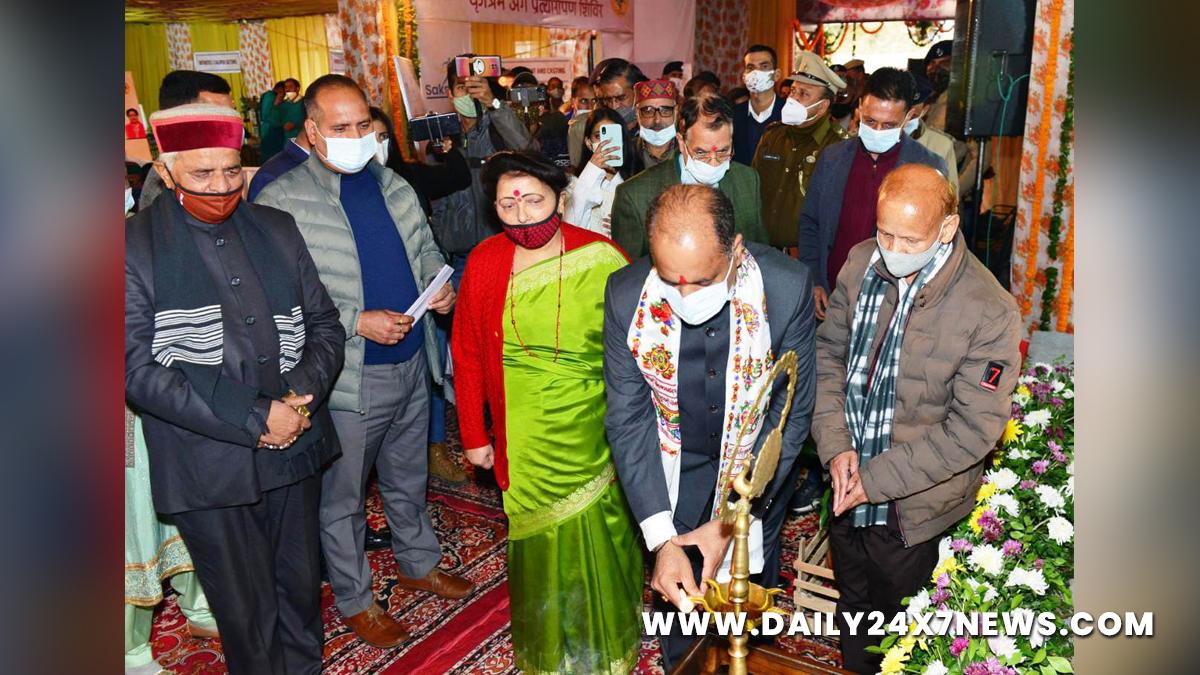 Shimla: The State Government would take steps to start the facility of providing artificial limbs in the IGMC Shimla for which adequate training would be provided to doctors and other staff so that needy in the State were not deprived of this facility. This was stated by the Chief Minister while inaugurating a State Level artificial limb transplant camp organized by the State Social Justice and Empowerment Department with cooperation of ‘Bhagwan Mahaveer Viklang Sahayata Samiti-Jaipur Foot’ here today for implantation of artificial limbs. Chief Minister said that ‘Bhagwan Mahaveer Viklang Sahayata Samiti’ was rendering a great service by helping the suffering humanity. He said that the people who were rendered handicapped due to some accident or mishap, were being provided artificial limbs so that they can realize their dreams. He said that this has brought a new ray of hope in their lives.Jai Ram Thakur said that Bhagwan Mahaveer Viklang Sahayata Samiti was established by D.R. Mehta in 1975 for the welfare of the specially abled and since then this Simiti has been continuously engaged in the service of the handicapped and has emerged as a largest organization in the world working for specially abled persons. He said that science today has made a lot of progress to avoid the disability associated with birth, but at times the disability may occur due to some disease or accident.

Chief Minister said that several people with physical hardships have achieved a lot in their life with hard work and commitment. He said that in special Olympics the physically challenged youths of the country and the State have brought laurels not only for themselves, but for the entire country. He said that Nishad Kumar of Una has won silver medal in this Olympics. He said that another girl, Arunima Sinha of Uttar Pradesh despite losing her one leg in an accident, conquered mighty Mount Everest. He said that these were the finest examples of that one can achieve anything with strong willpower and commitment.Jai Ram Thakur said that the State Government was committed to provide all possible help to the specially abled and people with disabilities. He said that the State Government has started Sahara Yojna to provide financial assistance of Rs 3000 per month to family with the chronically ill patient. He said that as many as 20,000 people were being providing financial assistance under this scheme. Chief Minister also honoured the doctors and technicians of Bhagwan Mahavir Viklang Sahayata Samiti. Urban Development Minister Suresh Bhardwaj said that the very first decision of the State Government headed by the Chief Minister Jai Ram Thakur was aimed at the welfare of the old people. He said that the age for availing the benefits of old age social security pension without the income limit criteria was lowered from 80 years to 70 years, which has further been lowered to 65years for the old women.

Social Justice and Empowerment Minister Sarveen Chaudhary said that ‘Bhagwan Mahavir Viklang Sahayata Simiti’ was indeed doing a commendable service in providing artificial limbs to the needy, thus bringing smile on the face of needy. She said that as many as 400 people have been identified in the State for the artificial limbs. She said that the State Government was committed to ensure welfare of the weaker sections of the society and has initiated several schemes for their upliftment. She also detailed various welfare schemes launched by the Department for the people with special abilities. She said that the State Government has also constituted a Divyagan Kalyan Board and Viklang Jan Kalyan Board for the welfare of these special people. Director Employment of SCs, OBCs, Minorities and Specially Abled Vivek Bhatia welcomed the Chief Minister and other dignitaries present on the occasion. He said that this was the first camp of its kind being organized by Shri Bhagwan Mahavir Sewa Samiti. Former MP and Chairman Scheduled Castes Commission Virender Kashyap, Mayor Satya Kaundal, Deputy Mayor Shalinder Chauhan, Chief Secretary Ram Subhag Singh, Dr Vijay of Bhagwan Mahavir Viklang Sahayata Samiti were present on the occasion among others.