Chief Minister Jai Ram Thakur today announced Sub-Tehsil for Raja Ka Talab to be opened in the premises of the office of Commissioner (Relief and Rehabilitation) in Fatehpur constituency of Kangra district. He also announced rupees two crore for the building of 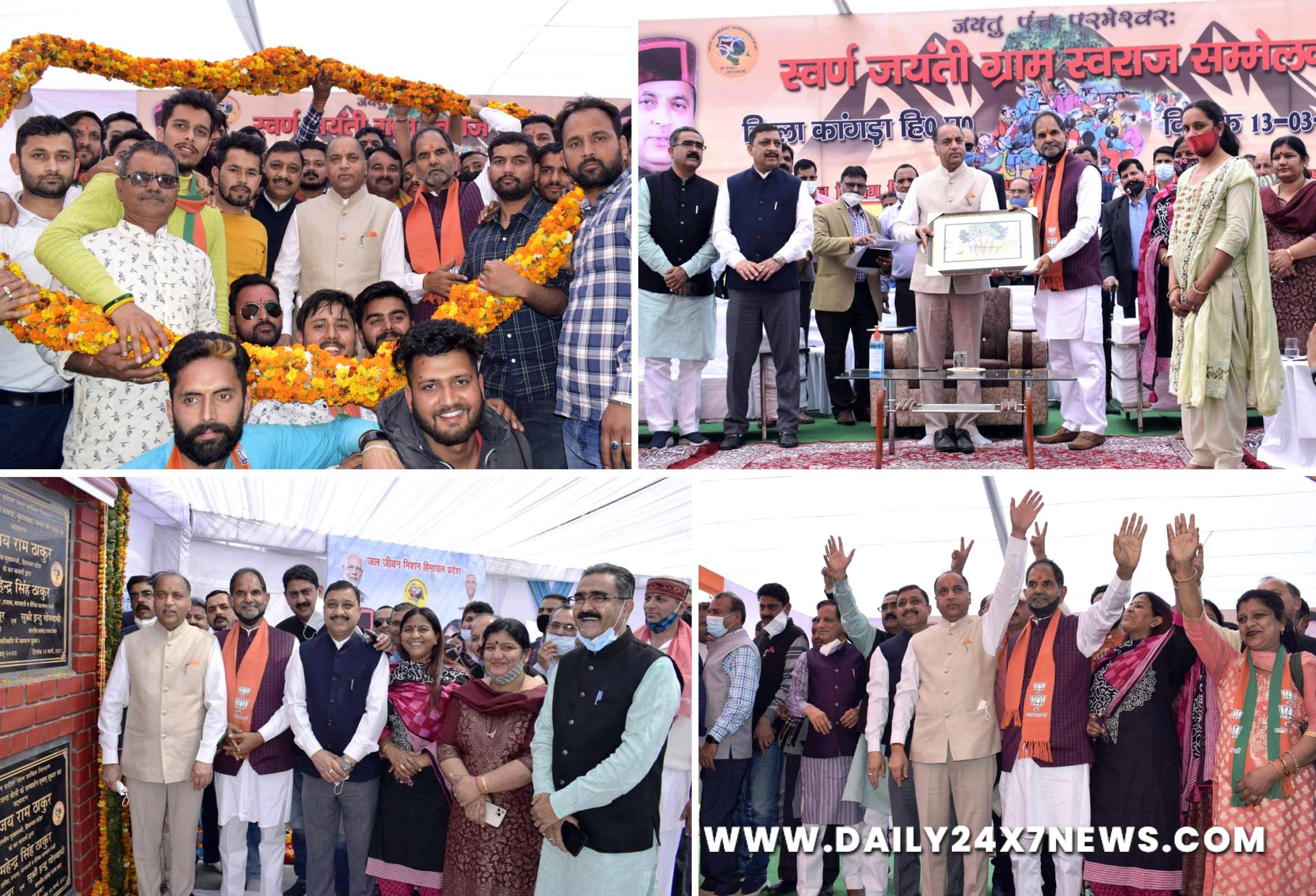 Kangra : Chief Minister Jai Ram Thakur today announced Sub-Tehsil for Raja Ka Talab to be opened in the premises of the office of Commissioner (Relief and Rehabilitation) in Fatehpur constituency of Kangra district. He also announced rupees two crore for the building of government degree college Rey and said that additional building would be provided at Dehari government degree college as per demand. He announced Rs. 20 lakh each for creation of sports facilities in Rahan Stadium and Ex-Servicemen Bhawan in the first phase.He also announced Rs. 10 lakh each for Ghaneti-Thaththar and Badi Batrahan roads under PMGSY, Deeni-Larath-Samlehat road, Kandor-Patta-Mukhtyal road, Deeni-Kumbh-Tanahara Hatali road, Narnu-Kukhnallah-Samana, Jagnauli-Malhanta and Palakhu-Churudi road. He said eight rooms would be provided as per demand in the CRC modern senior secondary school, Rehan. He assured that bus stand at Fatehpur and grain market (Anaj Mandi) at Riyali would come up after exploring all possibilities and completing all codal formalities.He announced up-gradation of government senior high school Tatwali to government senior secondary school. He said that the academic building at Woman Polytechnic College, Rehan would soon be completed and dedicated. An ultrasound technician would soon be posted at civil hospital, Rehan. Vocational classes at GHS, Fatehpur Badiyali and Samlet would be started as per proposals sent to the Education Directorate.
Jai Ram Thakur made these announcements while addressing a mammoth public gathering at Rehan stadium after inaugurating Himachal Pradesh Block Level Swarn Jayanti Gram Sammelan under the auspices of State Rural Development and Panchayati Raj Department.The Chief Minister said that the state government got only two years of the period given for the service of the people for effective working due to Covid-19. A complete one year was lost in fight against this pandemic. He thanked the people for joining the state government in the fight against Coronavirus and strictly adhering to all norms fixed by the health authorities. Taking a dig at the opposition, he said that over 2.5 lakh students, workmen and other people were brought back to their native places in Himachal from different parts of the country.Jai Ram Thakur applauded Prime Minister Narendra Modi for providing vibrant, strong and transparent leadership to the country and taking all pains during the fight against Covid-19. He said that it was due to the effective steps taken by the Prime Minister to make India self-reliant that over six lakh PPE Kits were being prepared today in the country daily. Today, India was supplying Corona vaccines to over 60 nations in the world. He thanked the Prime Minister for supporting and encouraging the scientist community to develop Corona vaccines in the country.The Chief Minister thanked the people for supporting the state government overwhelmingly in the last Parliament elections and recently held PRI elections. He urged the people to support the government in the upcoming elections for four Municipal Corporations and by-election for Fatehpur Constituency. Congratulating the elected PRI representatives, he urged them to work united for the all round developmental of the State.Earlier, the Chief Minister dedicated and laid foundation stones of nine developmental works of Public Works Department and Jal Shakti Vibhag at a collective cost of Rs. 2,927.46 lakh in Fatehpur Sub-Division. He inaugurated augmentation and improvement of lift irrigation scheme Beli constructed at a cost of Rs. 102.69 lakh, lift water supply scheme to villages Talara, Kutlahar, Balla and Sohar etc. worth Rs. 194.74 lakh and a bridge over Khawaji Khud on Badukhar-Riyali-Bela-Ludhiarchan road constructed at a cost of Rs. 512.15 lakh.
The Chief Minister laid foundation stones of Providing Functional Household taps (FHTC) connections in village Golwan, Batran, Sakri, Chatter, Bassa etc. through LWSS Golwan-Batran-Hatspand-Bassa under Jal Jeevan Mission at Rs.143.63 lakh, FHTC connections in village Manoh Sihal, Hara, Lohara etc. through LWSS Palli, Kut, Lohara worth Rs. 542.45 lakh, FHTC connections in village Barot, Sunet, Houri Devi, Hatli, Samlet etc. through LWSS Barot, Houri Devi, Samlet at a cost of Rs. 532.33 lakh under Jal Jeevan Mission and PLWSS to village Patta-Jattian and its surrounding villages worth Rs. 533.84 lakh. He also laid foundation stones of two PWD projects which included construction of Dadwala via Rehan Bazar old bus stand to Sakri road including bridge over Sakri Khud worth Rs. 289.34 lakh and construction of Primary Health Centre building with residence at Raja Ka Talab at a cost of Rs. 75.89 lakh.HP State BJP president and MP Suresh Kashyap while addressing the gathering thanked the people for supporting BJP candidates in the PRI elections held recently. He urged the people to support BJP in the upcoming by-election for Fatehpur constituency and general elections for Municipal Corporations of Dharamshala, Palampur, Solan and Mandi.Rural Development and Panchayati Raj Minister Virender Kanwar said that the state government was committed for upliftment of the common man in the state. Many developmental models were created in different gram panchayats across the State. Sufficient numbers of gram panchayats had been created in the state keeping in view the public demands. Forest Minister Rakesh Pathania also spoke on the occasion. He supported the demand raised by former MP Kripal Parmar to create running track in the Rehan stadium.MP Kishan Kapoor briefed about various developmental and welfare activities, policies and programmes being carried out by the Central government.Kripal Parmar briefed about the developmental activities being carried out in Fatehpur constituency. He thanked the Chief Minister for creating Pong Dam Developmental Authority and up-gradation of PHC into 50-bedded hospital at Rehan in execution of the demands raised earlier. He also presented various development demands of the area on the occasion.Transport Minister Bikram Singh, MP Indu Goswami, MLAs Arjun Thakur, Rita Dhiman and Rajesh Thakur, HP State BJP Sangthan Mantri Pawan Rana, Political Advisor to the Chief Minister Trilok Jamwal, HP State BJP Mahamantri Trilok Kapoor, Rakesh Jamwal and PRI’s elected representatives were among others who graced the occasion.