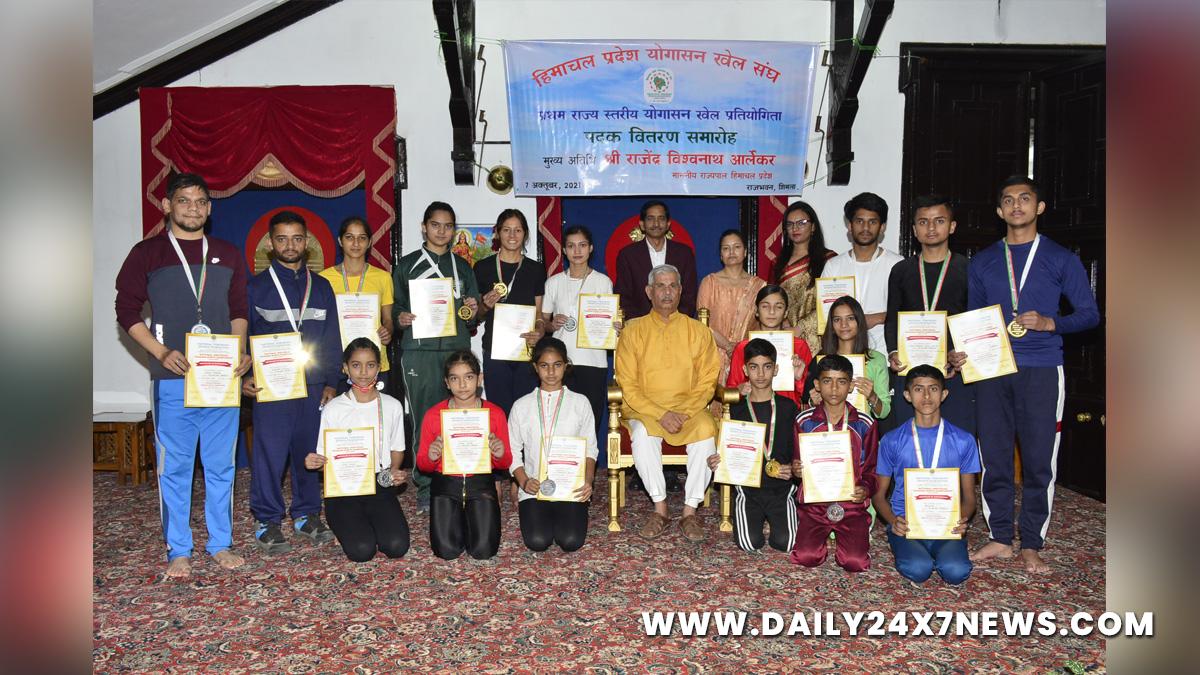 Shimla : With a strong willpower, we could convert Yoga into sports and got the desirable results, said Governor Rajendra Vishwanath Arlekar, while felicitating the winners of the first state level Yogasan Sports Competition organized by Himachal Pradesh Yogasan Sports Federation at Raj Bhavan today. He presented medals and citations to 18 winners of total 6 categories of boys and girls.Shri Arlekar said that Yoga was our tradition that has been going on for centuries and was a part of our lifestyle. India has a great contribution in many ways to the world and for human welfare, he added and said our philosophy has never been to attack others. “Our culture has been to win the hearts of others. It is our specialty that we can give something to the whole world. Yoga is also a part of this specialty which we have given to the world”, said the Governor.He said that due to the untiring efforts of Prime Minister Narendra Modi, Yoga was re-established globally and now 21st June was celebrated as International Yoga Day. Due to this, the fame of Indian civilization, culture and the art of living were established on the world stage, he added. “We need to bring more awareness in this direction”, said Arlekar. He appreciated the efforts of Himachal Pradesh Yogasan Sports Federation in this direction.

In the sub-junior girl’s category, Shraddha won the bronze medal, Nidhi Dogra got the silver medal and Disha Dogra got the gold medal. In the sub-junior student category, Sandeep got bronze medal, Abhishek got silver and Vishwajeet got gold medal.Shruti Trehan got bronze, Nitika got silver and Purba Bhati got gold medal in the junior girls category. In junior student category Harsh Vardhan got bronze, Piyush Mehta got silver and Hitesh Kumar got gold medal.Kamlesh Kumari got bronze, Kaushalya Devi got silver and Bharti got gold medal in the senior girls category. In the senior student category, Dixit got bronze, Amit Thakur got silver and Niketan Pundir got gold medal.Apart from this, the members of the team who technically conducted the competition online – Shubham Sharma, Anupama Chandel, Gopal Atri, Ishaan Chauhan, Naveen Kumar, Vivek Sood, Het Ram and Ranjit Singh were also given a citation and honored with a memento by the Governor. The Governor also honoured Pankaj Dadhwal and Naveen Kumar.On the occasion, President, Himachal Pradesh Yogasan Sports Federation Prof. G.D. Sharma said that the future of Yoga Sports was bright in the State. Vice-President Prof. Ajay Srivastava thanked the Governor for promoting Indian culture and Yoga and expressed hope that the Governor would guide the people in the upliftment of Yoga and other social works in the state.General Secretary Vinod proposed a vote of thanks.

All places of worship in Maha open doors, devotees out in force