BJP is working for the people whereas Congress is in rest mode : Samriti Irani 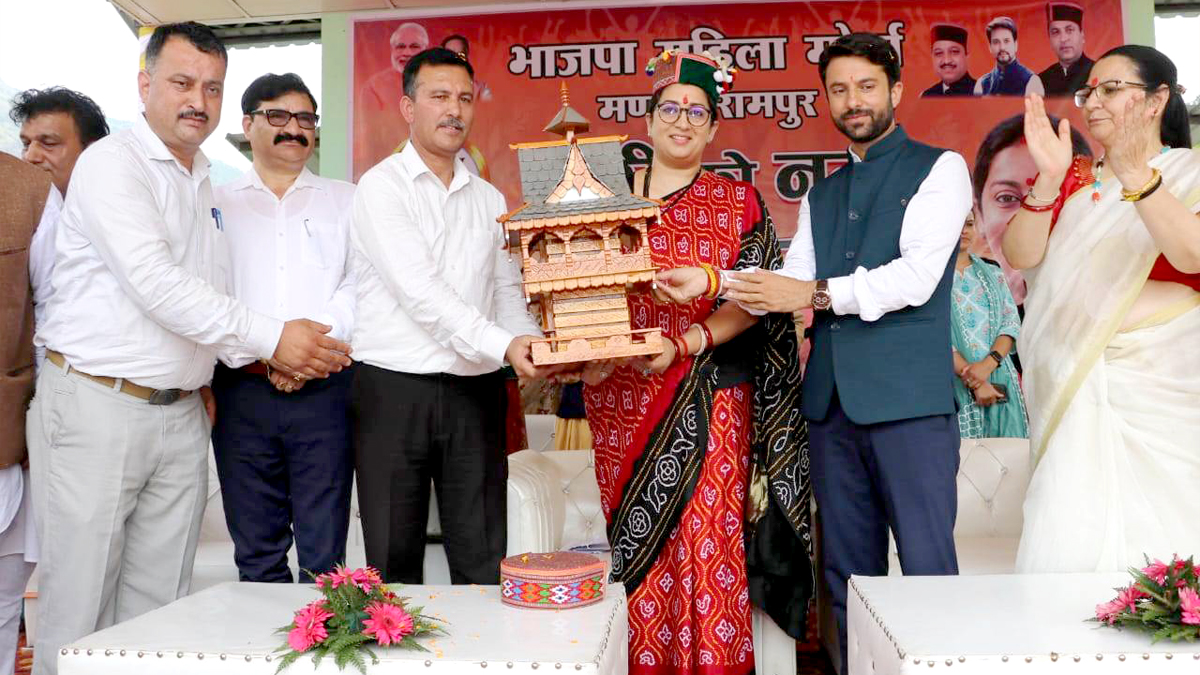 After 30 years Rampur got a sanskrit collage, this long pending demand was completed by the BJP Government in this tenure but unfortunately Congress had only given a dream for the same for the past 30 years. Showing dreams is an old tradition of congress.

Congress led the government in state and the centre for long but did not do anything for the state, our government also gave an Sub tehsil to Rampur this is a gift from the the Jairam Government to this vidhansabha.

Congress for years have not stood up to their words , they never complete what they say. Congress made sure that Atal tunnel should not get completed but I am thankful to the BJP Government that this historical tunnel has got completed and Today this tunnel is world renowned.

These days Congress leaders are leaving congress and recently Ramlal Thakur , a congress leader hailing from Bilaspur has given in his resignation from the post of congress State vice president. Ram Lal thakur also admitted that congress is directionless and leaderless, there are too many candidates of chief minister in himachal.

Well from this incident the condition of congress is quite clear.She said Prime minister Narendra Modi has given a new vision to National politics where he has taken care and given utmost respect to the women of the nation.

Women from rural and urban sectors are thankful for getting Narendra modi as prime minister of India.Modi has given 11 crore toilets to the nation and himachal gave toilets to more than 2 lakh people. Congress never thought about this minute demand. By doing this Modi has protected the prestige of the women in India.

Modi gave us Swach Bharat movement which changed the face of our state and nation. She said that congress never thought about the health of our general public. since the BJP Government has come to power in the centre 10 crore family are now covered under Ayushman Bharat where they are getting free health services and in himachal 4.37 lakh families are covered under this popular scheme.

Thanks to the Jairam Government the people who were not covered under Ayushman Bharat are now covered under for Himcare.I would like to endorse Double engine dose matters and the difference is clear.

We gave AIIMS in Bilaspur, PGI centre in UNA, Medical device park in Nalaghar and Bulk Drug park in Una. Congress should see what the double engine government has given to Himachal.BJP is working for the people of the nation whereas congress is resting.

BJP is the government of the poor and we work for their upliftment.Congress has no scope of coming back in power.Minister Govind Thakur, Mahila morcha President Rashimdhar sood, district president Ajay Shayam, chairman Kaul Negi, Yuvraj Bodh, Anita and kulveer were also present on this occasion.