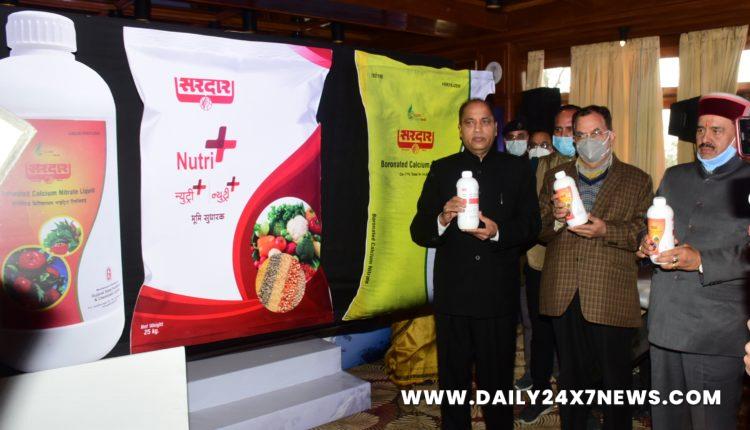 Shimla : Chief Minister Jai Ram Thakur launched the domestic liquid boronated calcium nitrate fertilizer, a joint venture of HIMFED and Gujarat State Fertilizers and Chemicals Ltd. (GSFC) under ‘Atmanirbhar Bharat Abhiyan’ here today. The GSFC has introduced five products in Himachal Pradesh including liquid boronated calcium nitrate, calcium nitrate, nutri plus, ammonium sulphate and boronated calcium to facilitate the farmers and horticulturists of the State.Speaking on the occasion, the Chief Minister congratulated the GSFC for introducing the liquid boronated calcium nitrate fertilizer in the country which was earlier being imported from other countries. He said that liquid fertilizer was a new concept which would help the farming community as this fertilizer would be prepared as per the requirements of different areas of the country.Jai Ram Thakur said that Prime Minister Narendra Modi launched the Atmanirbhar Bharat Abhiyan with a view to make the country self-reliant and minimizing the dependency on other countries for different products. The Prime Minister has started various initiatives for empowerment of the farmers and he was making all out efforts to double their income by the year 2022.He said that although Covid-19 pandemic has adversely affected the economic activities globally but it was a matter of great satisfaction that the Prime Minister was guiding the Nation to forge ahead on the path of development and economic growth. It was due to his clarion call that various industrial houses have come forward to accept this challenge as an opportunity and were manufacturing various products within the country including PPE kits, Masks etc.The Chief Minister said that Himachal Pradesh was promoting organic farming in a big way to minimize the hazards of chemicals. The state government made special budgetary provision for promotion of natural farming and today a large number of farmers have shifted towards this system of farming.
Jai Ram Thakur said that the fertilizer friendship between GSFC and HIMFED would prove beneficial to the farmers and increase the production. He said that the State has over Rs. 4000 crore economy of apple and these fertilizers would specifically benefit the apple growers. He stressed the need to make awareness about these products to achieve maximum benefits. He added that the Himachal Pradesh Government would seek more expertise of GSFC in strengthening the activities of the HIMFED and facilitating the farming community. He also expressed hope that these products introduced in the State would enhance the production and quality of farming products as soil crop specific fertilizers would be introduced to meet the varied nutrient’s requirements of different crops.Urban Development and Cooperation Minister Suresh Bhardwaj appreciated the endeavours of HIMFED in providing assistance to the farmers and horticulturists. He said that besides apple and other fruits, the State was producing off-season vegetables in a large scale. He said that the State has about 4400 cooperative societies and being an apex organization, the HIMFED was promoting the cooperative sector in a big way. He urged the Chief Minister to take up the issue with the Government of India and neighbouring States for ensuring uninterrupted supply of fertilizers to the State.In his welcome address, Chairman of HIMFED Ganesh Dutt said that HIMFED was suffering losses during past many years but it earned net profit of Rs. 1.11 crore during last two years and efforts were being made to minimize the losses. He said that the HIMFED would set up more petrol pumps in the State for which 10 places had already been identified. He urged the Chief Minister to fill up the vacant functional posts of different categories to ensure smooth functioning of the HIMFED.Chief Managing Director of GSFC Arvind Aggarwal said that the agreement between GSFC and HIMFED would give a new dimension to horticulture and agriculture sectors in Himachal Pradesh. He said that GSFC has started in-house production of calcium nitrate and boronated calcium nitrate which were earlier being imported to the country. He said that GSFC would provide fertilizers amounting to Rs. 20 crore to Himachal Pradesh during current financial year and fertilizers amounting to Rs. 31 crore during next financial year.Managing Director, HIMFED K.K. Sharma presented vote of thanks.Vice Chairman HIMFED Rakesh Thakur, Vice Chairman APMC Shimla Naresh Sharma, Director General of Indian Fertilizers Association Satish Chandra and other senior officers and progressive farmers were also present on the occasion.

Mission Purvodaya will drive eastern India towards self-reliance and contribute to making of an Aatmanirbhar Bharat : Dharmendra Pradhan

294 posts of various category to be filled temporarily on out source basis : Jai Ram…