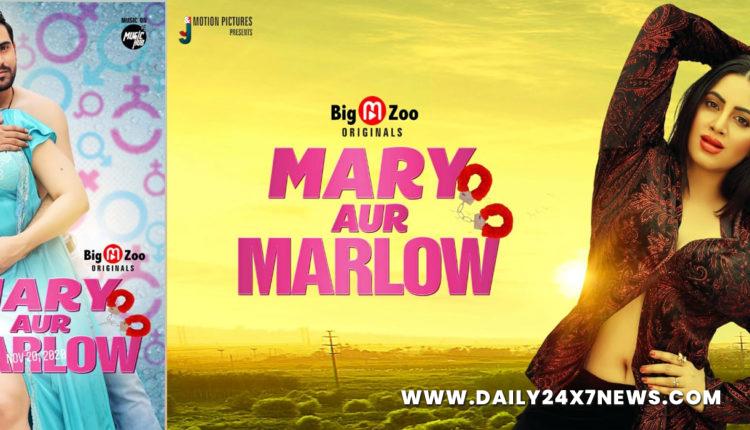 Mumbai : Actress Arshi Khan is out exploring her comic side in the OTT space and she is aware her new show comes with loads of double meaning.Arshi is seen trying her hand at comedy in the web series “Mary Aur Marlow”. She stars opposite Akshay Mishra in the series that revolves around Mary and Marlow, where Mary (Arshi) ends up becoming a sexpert for grassroot level people who cannot afford to go to the doctor or specialist.Since Mary’s Hindi is not up to the mark, Akshay, who plays Marlow, helps her communicate with the people she sets out to help. However, when he tries using ‘shudh’ Hindi, it leads to unintentional double meaning language.From the trailer and title, it is not surprisingly evident that the show has a lot of double-meaning dialogues.”It’s a double-meaning show but I think ‘Mary Aur Marlow’ is also a fun title. After hearing the title, people think it will have bold content but when they watch it, they will realise it’s a fun show, which has a lot of comic scenes,” Arshi told IANS in a telephonic interview.
Reacting to the government’s decision, to put all digital media portals, including online news and Over-the-Top (OTT) platforms under the Ministry of Information and Broadcasting regulation, Arshi said: “The government should definitely regulate digital platforms because nowadays there are a lot of web series that are showing vulgar content and people of any age group can access the internet. So, the government surely needs to keep an eye on them.”Arshi feels she has a good comic timing. “I never find it difficult to do comedy on screen because I feel my comic timing is really good, so I like to act in shows which have comic content,” Arshi said.”I had a really nice experience shooting for this series and I had a lot of fun working with (director) Anirudh (Kumar) while we were shooting for it. We have released just one episode of the show and I hope the audience will have a lot more fun watching the next episodes,” she added about the show, currently streaming on Big Movie Zoo App.

Akshay-starrer ‘Bachchan Pandey’ to release on Jan 26 next year